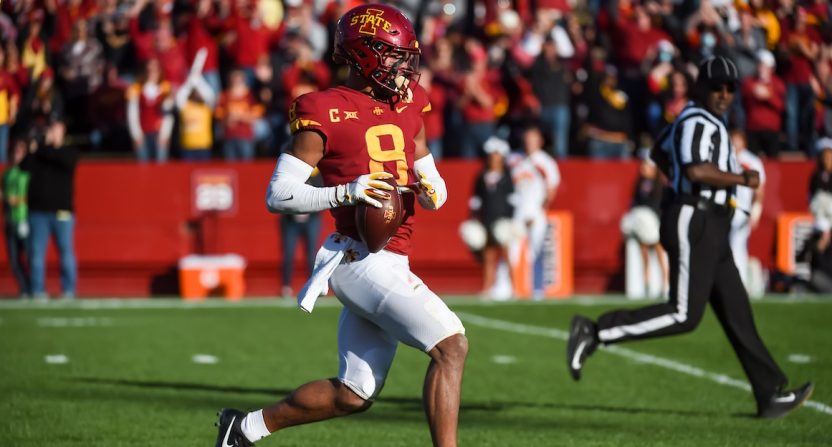 Referees have been determined to officiate taunting out of the NFL and college football this season, resulting in some of the harshest calls we’ve seen in recent memory.

A particularly egregious example of this occurred in Saturday’s matchup between No. 8 Oklahoma State and Iowa State in Ames, During the third quarter, Cyclones quarterback Brock Purdy hit Xavier Hutchinson on a slant route that the receiver turned into a 51-yard touchdown.

Except there was a flag on the play and what would’ve been the tying score for Iowa State was called back. The penalty? Unsportsmanlike conduct on Hutchinson, apparently for taunting Oklahoma State safety Jason Taylor II. But in looking at the play, where was the taunting? Hutchinson barely looked back at Taylor. He didn’t point or wave. And he did one high-step before crossing the goal line and celebrating his score.

However, field judge Randy Smith threw his flag for a penalty. That sent the Iowa State radio broadcast team of play-by-play man John Walters and analyst Eric Heft into raging disbelief. Listen to the call yourself, courtesy of the oracle who chronicles all of these broadcast moments for us, Timothy Burke:

“The kind of thing you never see called,” said Heft. Well, except during this season…

“Oh, come on!” yelled Walters. “That is HORRIBLE!”

“That is, like, the worst call in NCAA history,” Heft added after lamenting that “the fun police are out here in Ames” for that call.

It’s difficult to argue with him. Perhaps Smith heard Hutchinson say something as he turned back to Taylor while running toward the end zone. But there was certainly no demonstrative gesture that appeared to warrant the penalty. The high-step and dance? Let the young man celebrate making a big play!

Thanks to Dan Wetzel and Pete Thamel of Yahoo Sports’ College Football Enquirer for bringing this play — and more importantly, the radio broadcast — to attention.

Fortunately for the Cyclones, and perhaps some karmic justice, Hutchinson scored three plays later on a nine-yard pass from Purdy to get the touchdown that was wrongly taken away. Iowa State went on to upset previously undefeated Oklahoma State, bringing some joy to a season that has thus far fallen short of preseason expectations for Matt Campbell’s squad.