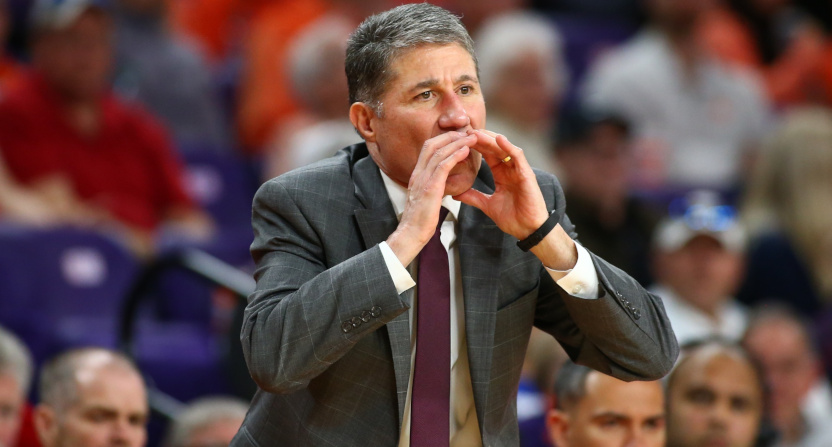 One of ESPN’s former college basketball analysts is in the news, and not for anything good. Dino Gaudio has a long coaching history in men’s college basketball, including head coaching stints at Army, Loyola (Maryland) and Wake Forest, and worked for ESPN as an analyst from 2011-18, but it’s his latest job (serving as an assistant coach at Louisville, a role he held from 2018 until Monday) that has him in hot water.

After a 13-7 regular season that saw the Cardinals go on to lose to Duke in the first round of the ACC tournament and miss the NCAA tournament, Louisville head coach Chris Mack decided not to renew the contracts of Gaudio and fellow assistant Luke Murray. As per Shannon Russell of The (Louisville) Courier-Journal, that led to Gaudio (seen above coaching during a Feb. 15, 2020 game against Clemson) threatening to leak sensitive information about the program to the media unless he was paid. And that led to him facing federal charges of interstate communication with intent to extort:

Charging documents released Tuesday say that Gaudio on March 17, in an in-person meeting with Louisville personnel, threatened to report to the media allegations that the basketball program had violated NCAA rules in its production of recruiting videos for prospective student-athletes and in the use of its graduate assistants in practices – unless the university paid his salary an additional 17 months or an equivalent lump sum.

Gaudio sent a text message to U of L personnel containing one of the recruiting videos he threatened to send to the media.

…Brian Butler, Gaudio’s lawyer, said that after a 30-year professional relationship with Mack, his client was shocked when his contract wasn’t renewed and in the “heat of passion made statements he wishes he hadn’t made.”

“It is a very sad day and he takes full responsibility for his lapse in judgment,” Butler said.

…“Dino has lived an exemplary life and coached at the highest level and changed the lives of thousands of athletes,” Butler said. “It is our hope that people who know and love Dino will consider this lapse of judgment in the context of 40 years of making the world and college basketball a better place.”

Here’s Louisville’s statement on this:

“This afternoon, the United States Attorney’s Office of Western Kentucky charged former University of Louisville assistant men’s basketball coach Dino Gaudio with ‘interstate communication with intent to extort’ related to the non-renewal of his contract with the University. As detailed in the charging document, after Gaudio was informed that his contract would not be renewed, he threatened to inform members of the media of alleged NCAA violations within the men’s basketball program unless he was paid a significant sum of money. The allegations of violations are the impermissible production of recruiting videos for prospective student-athletes and the impermissible use of graduate managers in practices and workouts. While the University cannot comment further due to the ongoing federal investigation and the NCAA process, it continues to cooperate with authorities as well as with the NCAA on the matter.”

“While I cannot comment on the details or substance of the matter, I am grateful for the professionalism of members of law enforcement and the United States Attorney’s Office. The University and I were the victims of Coach Gaudio’s conduct and I will continue to fully cooperate with authorities in their investigations. We take seriously any allegation of NCAA violations within our basketball program and will work within the NCAA processes to fully review the allegations.”

As Russell’s piece notes, these charges were released through a criminal information rather than an indictment, indicating that Gaudio doesn’t intend to contest the charges. And, interestingly enough, this is the same federal law that Karen Sypher was charged under. Sypher was sentenced to seven years in jail in 2011 for an attempt to extort then-Louisville coach Rick Pitino over a sexual encounter. (She was eventually released to a halfway house in 2017.)

Granted, Sypher’s case included several other charges, from lying to the FBI to retaliating against a witness. And it seems likely that Gaudio will wind up with a less-severe sentence. Russell’s piece says “The maximum penalty for the charge is two years in prison and a $250,000 fine, or both, but it will likely be far less under federal sentencing guidelines.” But it’s still certainly interesting to see another extortion case around Louisville basketball, albeit under a different head coach. (It’s also interesting to contemplate how the recording here happened; it’s unclear who recorded Gaudio’s remarks, but it’s sure unfortunate for him that that happened.)

And it’s notable to see the Cardinals again facing NCAA allegations of impropriety. NCAA violations played a big part in Pitino’s eventual firing in 2017, and a big part of Mack’s hire was about trying to move past that image damage. Nothing’s been proven here yet in terms of outside-the-lines activity from Louisville, but it’s certainly notable that Gaudio thought he had enough ammunition about NCAA violations to make a demand for money.

None of that justifies Gaudio’s actions here, and trying to extort a college athletics program seems like a generally bad idea. And this is a particularly dumb move from Gaudio, as this would seem to nix all hopes of him getting another media role. (Then again, being a convicted felon hasn’t stopped Craig Carton, so who knows?)  But it’s definitely interesting to see a former ESPN analyst run up on attempted extortion charges.