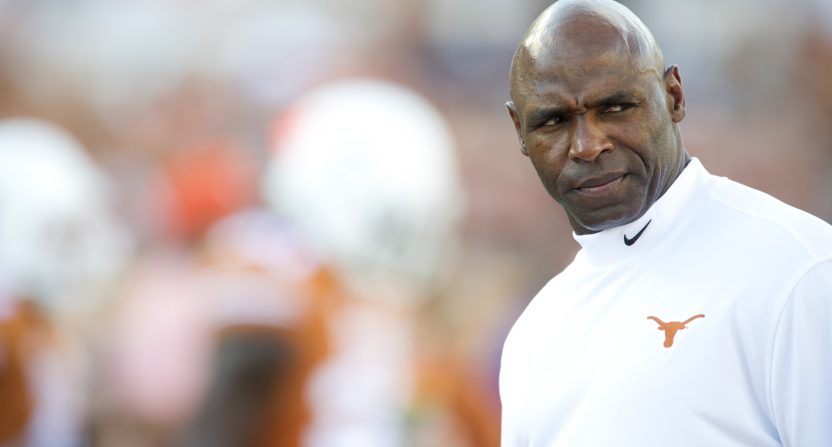 But even by those standards, this month’s Charlie Strong/Ed Orgeron/Tom Herman/Texas/LSU love pentagon was super weird.

Here’s a timeline of the soap-opera-caliber saga, complete with incorrect reports and inaccurate predictions from just about everyone in college sports.

When LSU fired Les Miles back in September, Ed Orgeron became an interim coach for what felt like the 12th time. Just like in his days as interim headman at USC, Orgeron was widely assumed to have a shot at the full-job but was far from a lock. And when LSU lost to Florida to fall to 6-4 on the season, Fox Sports’ Aaron Torres published a story with the following headline:

Near the top of the story, Torres wrote this:

There’s simply no other way to put it:  The loss eliminated Orgeron from the possibility of getting the LSU job full-time at the end of the season. Whether it’s Jimbo Fisher, Tom Herman or another name, someone other than Orgeron will be leading the Tigers out of the tunnel on opening weekend next year.

Now, there’s no need to pick on Torres, because he was far from alone. There was Dan Wolken…

In five years, LSU fans will thank Florida for erasing any notion they might have had to give Orgeron this job.

LSU’s the biggest winner here. The next three years with Coach Orgeron as head coach would have been a disaster.

There was not a lot of conditional language being used here. Orgeron, everyone seemed to believe, was done.

On the same day LSU’s loss supposedly sealed Orgeron’s fate, Charlie Strong—already under siege from boosters who wanted Texas to hire Houston’s Tom Herman–suffered an embarrassing loss to Kansas, a team that entered the day 1-9 on the season.

This was not so much a cold take as it was an incorrect (fake?) report.

Reporters immediately jumped in to say that Strong had, in fact, not been fired.

For the record, I can tell you that anyone saying Charlie Strong has been fired tonight is flat wrong, per UT sources.

I'm told report of Charlie Strong already being fired is not accurate. Those conversations have not been had at this point, per source.

Nov. 20 — Oh actually, Strong will be fired after all

The day after Strong’s firing was reported and then refuted, the Austin-American Statesman reported that Strong was to be fired but not until after the season finale against TCU. SI.com soon confirmed the report.

Players were not happy about the news, and most observers felt that if Texas was going to fire Strong there was no sense waiting an extra week.

There wouldn’t have been much reason for Jimbo Fisher to leave Florida State for LSU, but that didn’t stop the Tigers from pursuing him and the college football commentariat from speculating about him taking the job.

One Tampa sports radio station called Fisher’s move “a done deal,” only for the host who made that claim to say he was just kidding.

Hahaha, nooooo. I was teasing. Jimbo will get big $$$ regardless. I put him leaving at 25% https://t.co/tYWcwjAKaW

As if Strong hadn’t already been jerked around enough, suddenly he was reported to be coaching for his job against TCU.

Texas coach Charlie Strong could save his job with a blowout win over TCU on Friday, a university source said. https://t.co/Dl9KSgYFfR

We’ll never know if this report was correct because Texas lost to TCU 31-9, sealing Strong’s fate.

By all accounts, LSU and Texas both wanted Tom Herman, and on Thanksgiving it looked like the Tigers were going to get him.

A very, very, very pro-Tom Herman Texas source told me minutes ago that he is hearing that Tom Herman has accepted the LSU offer.

BREAKING: LSU has zeroed in on Tom Herman for next head coach and could have a deal in place as early as Saturday. https://t.co/oGfos1H4oD pic.twitter.com/O1mVel4M8c

Tom Herman is close to being named the next coach at #LSU, multiple sources told https://t.co/XBNn1eMJ5K Thursday.https://t.co/bvJJ2lOWaB

Chip Brown has a reputation for pressing “publish” too early, but if ESPN stalwarts like Chris Low and Brett McMurphy are reporting something, you kind of figure there’s something to it. So for a minute there, it sure looked like Herman was on his way to Baton Rouge.

UPDATE: Tom Herman hasn't ruled out an offer from Texas, if Charlie Strong is fired after tomorrow's game vs TCU. https://t.co/oGfos1H4oD

Herman, for his part, insisted he wasn’t going anywhere.

After being publicly identified as a back-up plan, Orgeron gets the job with LSU.

In the end, this part went about as expected. Texas fired Strong in the morning and announced Herman in the evening, before any false rumors even had time to spread.

So what can we learn from all this?

Well for one thing, we’ve got to be careful to trust the fringe reporters looking to make a name for themselves with big scoops. Chip Brown, who runs the Texas site on Scout.com, frequently “reports” major stories, reaps the clicks and retweets, then waits to see whether his report comes true. The report that Strong had been fired after the loss to Kansas seems to have been a similar situation.

But at the same time, ESPN was among the sites to rush with Herman-to-LSU. And that just goes to show that no one is immune to the rush to be first. There’s sometimes no time to check with a second or third source or to question your initial source’s credibility when you’re trying to beat dozens of other reporters to a story, even if that initial report comes from a self-interested agent looking to drum up some attention his client. Which is unfortunate because sometimes, unfortunately, sources are wrong.

Oh and the other lesson we can learn: Don’t ever try to predict the coaching carousel.