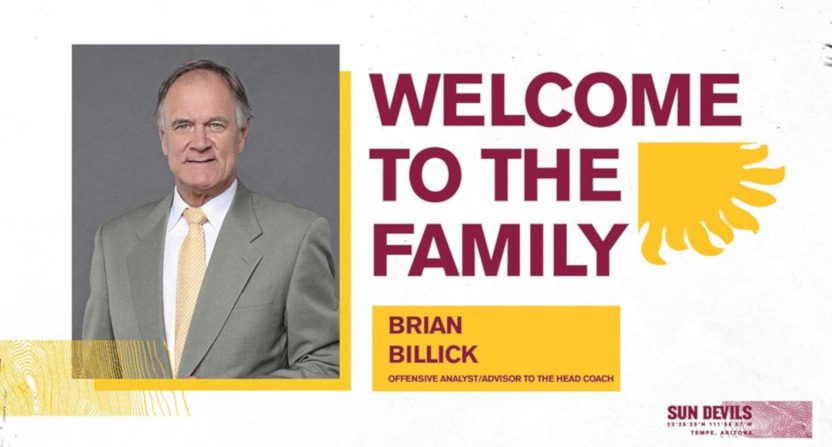 A long-time NFL media figure is returning to a coaching role. That would be Brian Billick, the Baltimore Ravens’ head coach from 1999-2007 who’s been working in the media world (particularly with Fox and then NFL Network) for most of the time since then. Billick is now teaming up with another former coach-turned-analyst-turned coach, Arizona State head coach Herm Edwards; the Sun Devils announced Monday that Billick will join Edwards’ staff as an offensive analyst and advisor to the head coach. Here’s more on that from a release:

“I am pleased to announce to Sun Devil fans that Brian Billick has accepted the position as Offensive Analyst, Advisor To The Head Coach, on my staff at Arizona State University,” says Edwards. “I have known Brian since the 1980s and he is a person whom I completely trust. He has built one of the finest reputations the NFL has ever known, serving as a head coach, an assistant coach and as a respected television analyst. Brian has one of the brightest offensive minds in football today and that is especially why I hired him. He will serve as a valuable resource to our entire coaching staff, but specifically to our offensive staff.”

…”I have known Coach Edwards for over 40 years and both Ray Anderson and Marvin Lewis for almost that long,” says Billick. “I was working the Hula Bowl two weeks ago with Mike Smith and ASU reached out to me at that time. I really enjoyed tapping into the players there and helping them to highlight their abilities. They proposed this opportunity to me, to have another set of eyes looking at and evaluating Sun Devil football and I thought it was the right time for me to make this move. I love what they are doing at ASU. It’s all about structure in the NFL and hopefully that’s what I can bring to the table at ASU. My work for the last 12 years in television at Fox and the NFL Network has allowed me to take a step back and see the game from a different angle. It broadened my perspective and that is what I will bring to this position.”

“I’ve known Brian for over 20 years and I am confident that his presence at ASU as an Offensive Analyst and contributions as an Advisor to Herm will add great value to our program,” says Ray Anderson, ASU Vice President for University Athletics.

The 67-year-old Billick is the third former NFL head coach on this staff, as former Cincinnati Bengals head coach Marvin Lewis is also on the coaching roster as a special assistant to the head coach. It will be interesting to see what he brings to that team.

Billick has also received a fair bit of praise for his media work, perhaps especially at NFL Network from 2014 through last year. So it’s notable that he’s moving on out of the media world and back to the coaching world. And it’s also notable that he mentions that his time in the media world has “allowed me to take a step back and see the game from a different angle”; there’s definitely some logic to that.  Some moves from media back to coaching work out quite well, but some don’t; we’ll see how this works out for Billick and the Sun Devils.