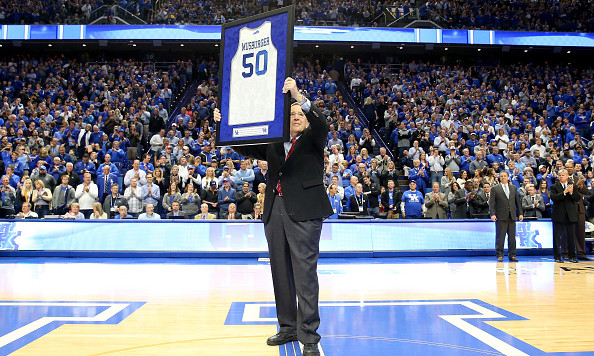 His penultimate game was a blowout. But his very last game on ESPN, Georgia-Kentucky at Rupp Arena in Lexington, KY was a barnburner that went to overtime. Brent Musburger’s farewell game was not only a tension convention, but his career was extended by five minutes when the Bulldogs and Wildcats were tied at regulation.

Before the game, Kentucky coach John Calipari gave Musburger a jersey with the number 50 signifying his number of years in broadcasting:

Before his final ESPN game, Brent Musburger was presented with this awesome jersey from Coach Cal! pic.twitter.com/gGmBUjtUJ8

And one last time, we got Brent’s signature open:

At halftime, several coaches including Bob Huggins, Jay Wright and others paid tribute to Musburger. Bill Self dropped an over/under reference:

During the game, Kentucky and Rupp Arena paid tribute to Musburger first on the scoreboard which brought a standing ovation:

And Jay Bilas paid tribute to Brent as well:

Brent walked out on the court for another standing O:

Malik Monk hit a shot to tie the game, but Musburger thought it was a three, but later admitted that he was wrong:

Kentucky took over in OT and won. At the end, Calipari shook hands with Brent:

ESPN played a montage showing some of Musburger’s highlights including Georgetown-Villanova, Catholics vs. Convicts and many more. And then he had the last word:

ESPN's tribute video to Brent Musburger, includes the legendary "This is for all the Tostitos" pic.twitter.com/Bkde4jg1Ws

The legendary @BrentMusburger signs off for the last time.

“What a road we’ve traveled together. You know, thanks so much to you for sharing your time with me. What great memories we’ve had over the last almost fifty years. But now it’s time for me to turn over the play-by-play duties to those fine young announcers who are growing up at ESPN. Make no mistake about it, I’m going to miss games like this. I’m going to miss working with all the great analysts I’ve been with over the years, but maybe you’ll pay me a visit out in my new place in Las Vegas. Why not? We can share a cold one and maybe a win or two! Anyway, thank you so very much for all the appreciation and all the great moments we’ve experienced together. God bless.”

You can’t go out any better than that. Thanks for the memories, Brent. And you may get a few visitors from your friends at Awful Announcing in your desert home to take you up on your offer to share a cold one.