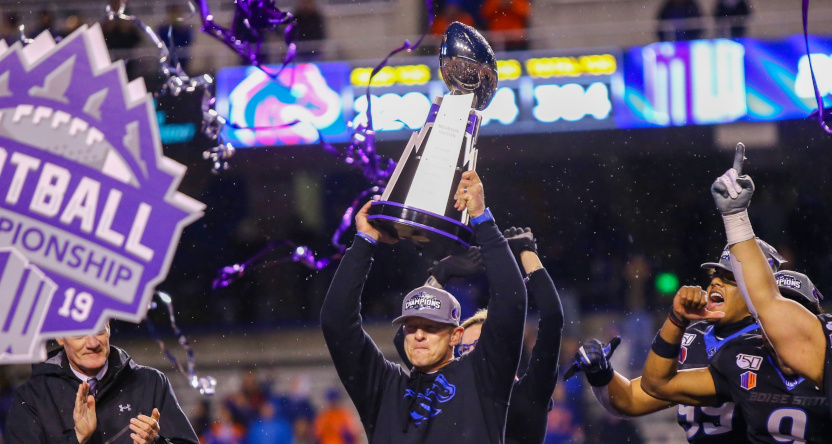 The Mountain West Conference’s latest TV deal with CBS and Fox (which runs through 2026) still treats the Boise State Broncos separately, with the Fox package (including even a potential 10 a.m. local kickoff in Fox’s Big Noon Saturday window for their Sept. 19, 2020 game against Florida State) focusing on Boise State home games. And the Broncos (seen above celebrating the 2019 Mountain West championship) are still set to get extra revenue from the conference beyond what other schools get in this deal.

But Boise State is unhappy with Mountain West commissioner Craig Thompson’s comment on a Jan. 9 conference call that this deal would be the last one where the school was treated separately, and that’s led to them issuing a statement Friday that they were “in the process of weighing our options to move forward” and also filing a complaint against the conference that day in court in Ada County, Idaho. The school and the conference did issue a joint statement Wednesday, however, saying that there may still be a chance of settling this out of court:

“Last week Boise State filed a complaint regarding media rights against the Mountain West Conference, however, that action alone does not formally begin a lawsuit. The University and the Mountain West are currently in discussions in hopes of bringing this matter to a resolution without litigation.”

What exactly is “this matter”? Well, Boise State’s complaint (available in full at Courthouse News here, via Jeremy Mauss of USA Today’s Mountain West Wire) is largely that their agreement to stay in the conference (signed in December 2012, after they’d previously said they were going to leave for the Big East) didn’t specify any sort of end to the provision that their media rights would be negotiated separately. Some key parts from that complaint:

The Re-Entry Agreement does not contain a termination or expiration date and remains in full force and effect.

…Boise State shall provide the MWC the exclusive television broadcast rights to its intercollegiate athletic events, including but not limited to home football games, each season.

In return, MWC will ensure such Boise State home football games are not part of, nor granted under, any current or future MWC conference-wide television rights contract including the MWC television rights currently under contract with CBS/CSTV or as such may be amended in the future.

Material terms include but are not limited to monetary terms, time/duration of the license, cancellation terms, network upon which the games are broadcast, time and dates of performance (games), and other terms relevant to payment and performance.

The revenue from such Boise State home football games license/sublicense shall be retained by the MWC and the MWC will add its retained amount to the MWC media revenue monies to be pooled and disbursed in the same manner as with all other MWC media revenues.

…The terms and conditions of this agreement shall bind the MWC regardless of any contrary, conflicting or inconsistent provision of the MWC constitution.

So yes, that doesn’t seem to indicate that there’s an out option for the conference, and it brings up some questions about why Thompson said “This will be arguably the last contract we will negotiate Boise State separately” on Jan. 9. The current agreement also sees Boise State receiving an extra $1.8 million annually relative to the other MWC schools. But Dave Southorn writes at The Athletic that the conference’s December board of directors meeting involved a vote to try and end that agreement:

When the Mountain West held its board of directors meeting Dec. 15 and 16, Boise State believed the conference would continue to support not just keeping the additional $1.8 million outlay but also increasing it proportional to the new deal.

The filing alleges that Thompson and consultant Dean Jordan presented eight alternatives, none of which mentioned increasing the bonus. Instead, it states, all eight included different methods for phasing out and ending the additional money agreement.

Boise State said it was not given the proper amount of information and did not approve or accept the new television contract, and voted against a proposition to end the bonus payment once the contract ends. It also states that two members of the Board of Directors wanted to end the bonus immediately.

There are some possible challenges ahead here for both sides. For the Mountain West, the contract they agreed to with Boise State sure doesn’t appear to have an end date or an easy way out. And while their other schools’ directors would presumably love to end the Broncos’ separate status and increased share of revenue, it certainly seems that Boise State is still a draw above and beyond the rest of the conference; having Fox Sports pick up the part of the package including their home games certainly doesn’t suggest there isn’t much interest in it, especially when Fox is talking about featuring them in that highly-promoted Big Noon Saturday window (and against an ACC school to boot, not even a school from another conference where Fox has rights). The Broncos still seem to be a key driver of the Mountain West’s overall revenues, and it’s understandable why they would want to not give up their unique status, especially with the contract appearing to not provide an easy way for that to happen.

However, it’s notable that Boise State is also perhaps in a weaker position now than they were in 2012. From 2006 through 2012 (in first the WAC, then the Mountain West for 2011 and 2012), the Broncos posted 13, 10, 12, 14, 12, 12, and 11-win seasons. From 2013 through 2019, they posted 8, 12, 9, 10, 11, 10, and 12-win seasons; that’s still very good, but it’s not at the level they were at before, and they’ve wound up much lower in the year-end rankings (and in less of the discussion for the top Group of Five team). And there really doesn’t seem to be an obvious path to them heading to a Power Five conference at this point in time. They could go independent in football or join the AAC, but neither of those options seems clearly better than what they have in the Mountain West (or even what they would have in a Mountain West where they didn’t have special status). So there’s certainly a discussion about what leverage they have.

At any rate, this should be an interesting proceeding to follow, especially if it does wind up making it into litigation. It’s understandable why the leadership of other Mountain West schools isn’t thrilled to see Boise State continuing to receive special treatment and special negotiation, especially when the Broncos haven’t been as nationally-regarded as they were in the days before this 2012 agreement. But at the same time, that agreement certainly doesn’t seem to give the MWC an easy out, and there’s still definitely a lot of national interest in Boise State relative to other MWC schools. And the Broncos have still been the conference’s strongest football team over the 2013-2019 span, and they’re still a notable TV draw relative to other conference schools, so losing them wouldn’t seem great for the MWC. We’ll see how this all works out, but it’s certainly a notable story that’s worth following.