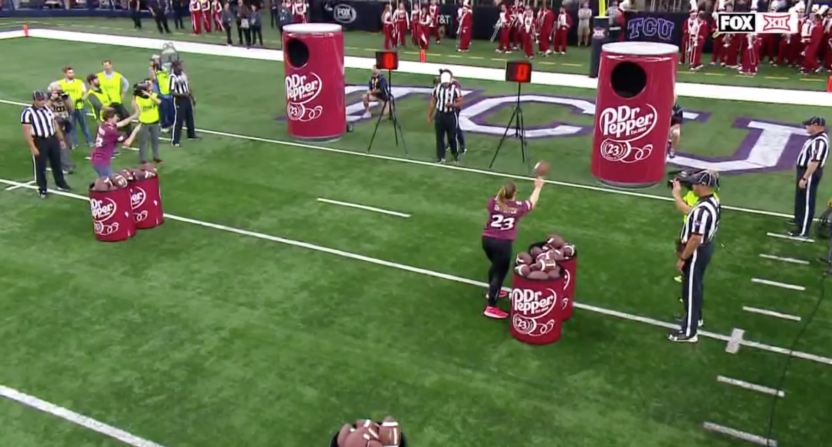 It’s officially college football postseason time, which means Dr. Pepper is giving away $100,000 in tuition money to whichever college kid can more effectively throw a football into a giant soda can during halftime of a big game.

Over the years, the optimal strategy for this contest has crystallized. Contestants have universally decided that the best way to get the ball into the hole is not by throwing it overhand like, you know, a football; it’s by awkwardly chest-passing like a middle-aged dude in a pickup basketball game.

At halftime of Saturday’s Big 12 championship game between Oklahoma and TCU, a pair of students stepped up to their respective buckets of balls and followed in the grand tradition of chest-passers before then. And although the strategy again seemed to work, the contestants did not get away without some needling from host Petros Papadakis, who declared as the event started, “We’ve seen a lot of chest passes. That’s the new style, and it seems to work.”

As the chest passes flew, Papadakis’ commentary consisted primarily of calling out the tactic.

We certainly can’t blame the kids for relying on the chest pass, which has proven successful. But hey Dr. Pepper, if you’re going to put 100 grand at stake in a goofy halftime contest, you could at least devise an event that doesn’t make the contestants look like idiots. When your contest incentivizes people to throw a football incorrectly, it’s probably time to make some tweaks.

As our Ben Koo wrote in 2015 in a scathing takedown of the Dr. Pepper contest…

I’d rather watch these Dr. Pepper contestants play cornhole than have a football chest passing contest. How about hitting a football with a tennis racquet? Hitting a hockey puck with a baseball bat? Given this is a football halftime show and involving footballs that are—from my extensive history watching the sport—usually thrown with one hand, there most certainly should be an emergency board meeting called to remedy this gross strategical marketing mistake, ASAP.

The idea of a high-stakes halftime contest is cool (and the philanthropic element is great, of course), but there’s definitely some room for improvement here.

And by the way, Rachel wound up winning the contest and the $100,000 prize during the Oklahoma-TCU intermission. Congrats, Rachel.