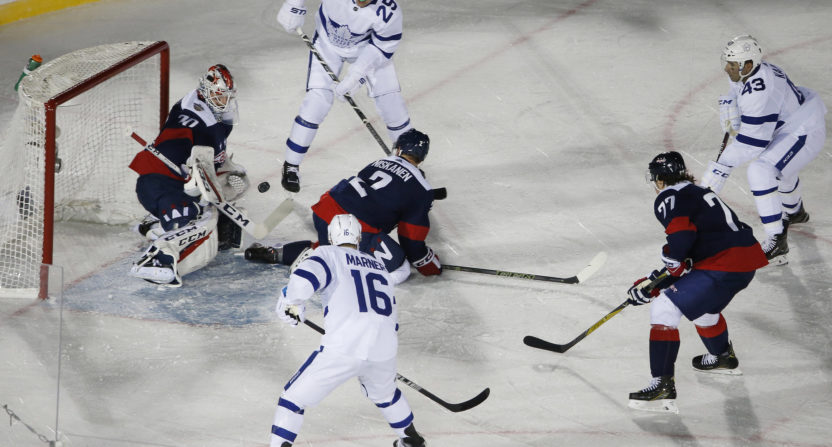 The Washington Capitals and Toronto Maple Leafs played an outdoor Stadium Series game on Saturday night in Annapolis, MD, and the game was televised nationally on NBC.

Midway through the third period, there was a power outage at Navy-Marine Corps Memorial Stadium, and the game was delayed for about 15 minutes.

Well, the delay caused the game time to go past the 11 PM ET mark with just over four minutes remaining in the third period. And NBC cut away from the game for other programming, with that being the local news for most affiliates with SNL to follow. (I got In Depth with Graham Bensinger in the San Diego area instead of the news.)

NBC warned right before cutting away that they were putting the remainder of the game on NBCSN.

Now, it should be noted that it was a 5-2 game with just over four minutes left, so the odds of a Maples Leafs comeback were tiny. Still, the decision to cut away from the outdoor game for other programming did not go over well with NHL fans, with some of the complaints saying how NBC would never do that with an NFL game.

NBC cut away from this outdoor game to get to local news and SNL. Brutal.

Yeesh….NBC cutting off the hockey game with 5 mins to go cuz of the power failure and switching it to NBCSN so news and SNL start on time. Let's see anybody try that with the freaking NFL.

If this was an NFL game and not an NHL game it would still be on NBC not your local news. #StadiumSeries

NBC, please ditch the NBC on NHL rights once the contract expires if you are going to cut off the last 5 minutes of the #StadiumSeries game. I bet you will do that once the Finals come. You wouldn't pull games if this was an NFL game #Bullshit

So, a delay of 15 minutes with the lights going out and NBC switched off the game at 11 p.m. for local news. This is not great.

NHL getting a ton of respect. Lol. @NBC cuts away early from Outdoor game at Navy to start local news on time to get to SNL on time. Gotta love your TV partner. @NHL

There were only three minutes left in the game. The NHL really can't have a better agreement with NBC than this? The local news couldn't have been pushed back by a few minutes the way it is for any other live broadcast?

I’m with you Twitter. Imagine @NBC doing what they just did to the @NHL to a @NFL game. It’s a wonder why the average hockey fan walks around with a chip on their shoulder (typically reserved for @ESPN). Way to go @NHLonNBCSports. ? #HeidiGame