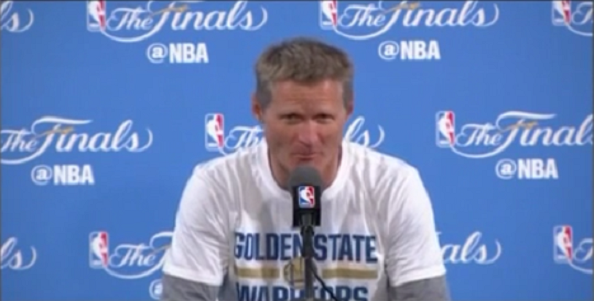 Golden State Warriors head coach Steve Kerr was once one of Marv Albert’s many broadcast partners on TNT, and Kerr seems to have picked up on some of his former play-by-play man’s tendencies during their time together.

So after Warriors practice on Friday in preparation of Sunday night’s NBA Finals Game 2, Kerr showed off an impersonation of Albert while talking to reporters:

It’s actually not a bad impression at all. “It counts! With authority!”

Kerr worked with Albert after his playing career from 2003 to 2007 before leaving TNT to become the general manager of the Phoenix Suns. Following three years in the Suns’ front office, Kerr returned to broadcasting games with Albert for another four years before taking his current position as Golden State’s head coach.

The two had a good rapport even back in Kerr’s playing days, when the guard was one of the few Chicago Bulls players always willing to speak with the media and Albert called many of their games during their 1990s championship run.

“I used to think that he was actually preparing ad libs, and he’d be looking for people to talk to, which was sad,” Albert joked to the San Francisco Chronicle‘s Rusty Simmons in March. “But a lot of what he did then helped with how good he became on the air. He evolved into one the premier color commentators in any sport. He was a sure shot almost from the start.”

Maybe TNT can get Kerr to analyze a segment or two of a Warriors game while doing a Marv Albert impression. Who wouldn’t want to see that? And has anyone checked with Albert if he does an impersonation of Kerr?