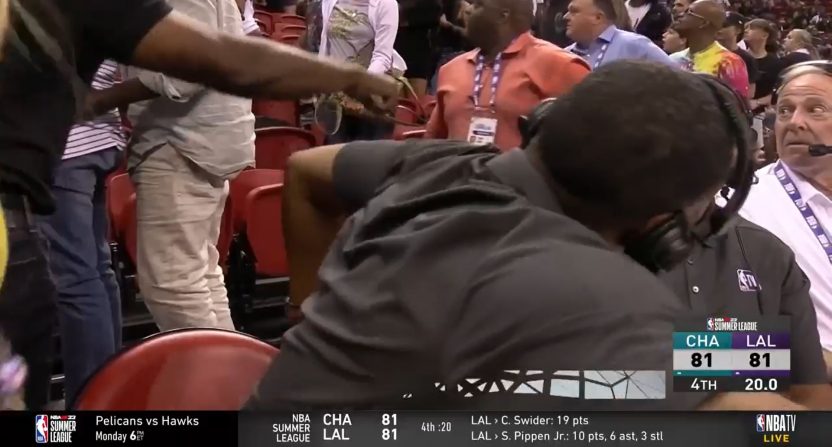 With just 20 seconds left in the fourth quarter, a timeout was called, prompting the NBA TV cameras to put analyst Steve Smith and play-by-play voice Chris Miles on the screen. While Smith and Miles were talking, fans turned around in unison to see the obvious commotion behind them. As the fans stood up to check out the fracas, Smith, a 14-year NBA veteran, immediately jumped out of his seat with a purpose.

Steve Smith was ready to go as a crowd fight broke out behind the NBA TV broadcast pic.twitter.com/cEJQMugX0p

“OK, we have an incident behind us right now,” Miles said. Normally, broadcasters would avoid paying attention to a crowd fight. But with the cameras already pointed on them, Miles was forced to address why the fans and Smith were jumping out of their seats. “It seems as if security teams are on it and it is being handled. Hopefully everyone up there is safe and cooler heads prevail.”

“OK, yes sir,” Smith added after the rush of adrenaline.

As Miles noted, security was quick to the scene and nearby fans also did a good job of breaking up the fight. Too often during crowd fights, security is nowhere to be found and adjacent fans do more to escalate the incident than they do to help tame the fight. But Smith wasn’t about to sit there with his back to the scene. If security didn’t do their part, Smith certainly looked ready to defend the NBA TV broadcast table.

“Smitty, that’s the second time you flinched, but that one I understand,” Miles told his broadcast partner with a chuckle. “You were ready to go. You looked like the old Smitty.”

Luckily, Smith didn’t have to get involved, and the broadcasters’ space wasn’t invaded by the unruly fans. But it was definitely nerve-racking for a moment, because there was no telling how big the fight might get and how far it would spill.