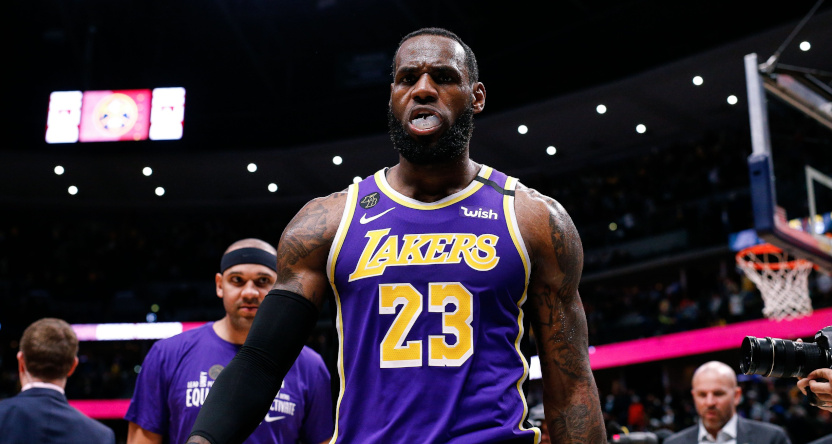 There are all sorts of cases of local blackouts affecting sports, and of ridiculously large local blackout areas (especially with baseball). But it’s rarer to see a national game blacked out in an area where all publicly-available information insists it shouldn’t be blacked out. That’s what has happened with some Los Angeles Lakers broadcasts on ESPN this year, though, with several people in the San Francisco Bay Area (including this writer) blacked out from those games (including a Feb. 12 one against the Denver Nuggets; the top photo is of LeBron James after that game.)

The California blackouts for those games are supposed to apply to areas in Spectrum Sportsnet territory (which only stretches up to Fresno County and parts of Monterey County, as well as parts of Nevada and Hawaii), but they hit quite a few people in the Bay Area.

@espn @ESPNNBA what gives? Why are #Lakers games not airing as advertised and it just has 30 for 30's, which aren't good episodes? Is it blacked out in ALL of Cali? I live in the #BayArea, so no chance in hell the game should be in blackout restriction.

If it’s any consolation, at least @espn Customer Care replied to my email regarding why tonight’s @Lakers at @nuggets game is not available in Northern California. This blackout happened on January 3, 2020 with a #Lakers game vs. @PelicansNBA, and I got zero response. #NBATwitter

Because it’s locally televised by @SpectrumSN (I don’t get that channel here in Northern California), they are obligated to black it out in my area. I’m 300+ miles away from #LosAngeles. I don’t think @espn Customer Care knows what’s going on.

I’m have the same issue. I live in the east bay and this just doesn’t make sense!

Indeed, that doesn’t seem to make much sense. So we asked ESPN about it. They looked into it, and in the end, found that the issue was related to zip codes. As per their explanation, at some point, part of the Bay Area had a zip code that was also used at some point for the Brentwood neighborhood of Los Angeles. While those zip codes aren’t the same now, the database that’s used for determining blackouts had them conflated, which led to parts of the Bay Area being blacked out when they shouldn’t have been. This also apparently happened with some Clippers games, televised locally on Fox Sports Prime Ticket, which is also not available in Northern California.

ESPN only found this issue with U-verse, and they’ve corrected it now, so Bay Area residents with U-verse should again be able to watch ESPN broadcasts of Lakers and Clippers games without blackouts.

This is not something that solves all blackout issues, of course. There are numerous places where national sports broadcasts or out-of-market streaming packages are blacked out locally over local rights for a channel that isn’t actually available there (or has very limited availability there). And the giant “local” territories can be a problem in their own right; Hawaii’s a lot further from Los Angeles than the Bay Area is, but blackouts of national games there aren’t about a database error, but rather about that territory being claimed as Lakers’ broadcast territory. But it’s certainly interesting to find a case where a blackout wasn’t about anyone’s claimed broadcast territory, but rather a zip code issue in a database.