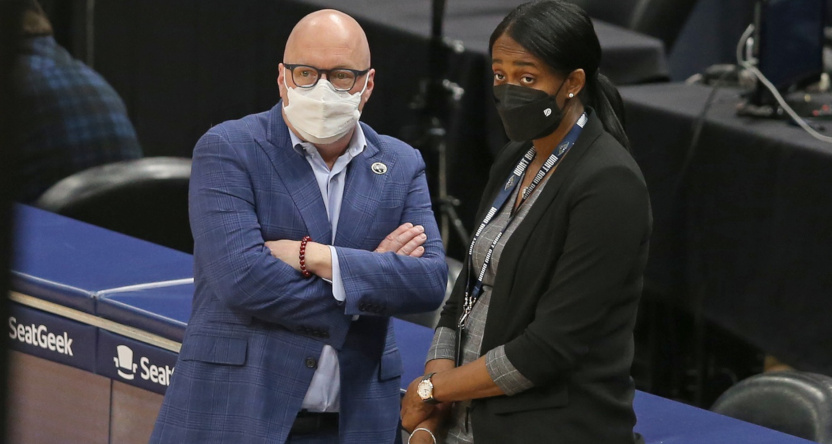 The last few weeks have seen some interesting discourse between teams and their leagues, especially with the NHL’s New York Rangers putting out a statement accusing league VP George Parros of “dereliction of duty” for not suspending Washington Capitals’ forward Tom Wilson. (That statement eventually saw the team fined $250,000.) On the NBA front, things didn’t escalate to quite that level, but New Orleans Pelicans’ executive vice president of basketball operations David Griffin (seen at left above with Pelicans’ VP Swin Cash ahead of a April 24 game) was fined $50,000 Sunday for his remarks about NBA officiating around an injury to Zion Williamson that the team announced Friday. Here’s the key part of what Griffin said then:

“We told the NBA through every means available to us … that the way they were officiating Zion was going to get him injured,” Griffin said. “Quite frankly, he’s injured because of the open season that there’s been on Zion Williamson in the paint. He has been absolutely mauled in the paint on a regular basis to the point where other players have said to him, ‘I’m going to keep doing this to you’ because they don’t call it. There is more violence encouraged on him in the paint than any player I’ve seen since (Shaquille O’Neal). It was egregious and horrific then. The same is true now.”

It’s certainly interesting to see Griffin hit with such a substantial fine here, and it reinforces how eager the NBA is to avoid public criticism of its officiating from team employees. But that was always a likely outcome from these comments, so it’s notable that Griffin still said this knowing he would likely be fined. We’ll see where this goes next, but it’s definitely notable to see the league drop a fine hammer on Griffin for his remarks about the officiating around Williamson.