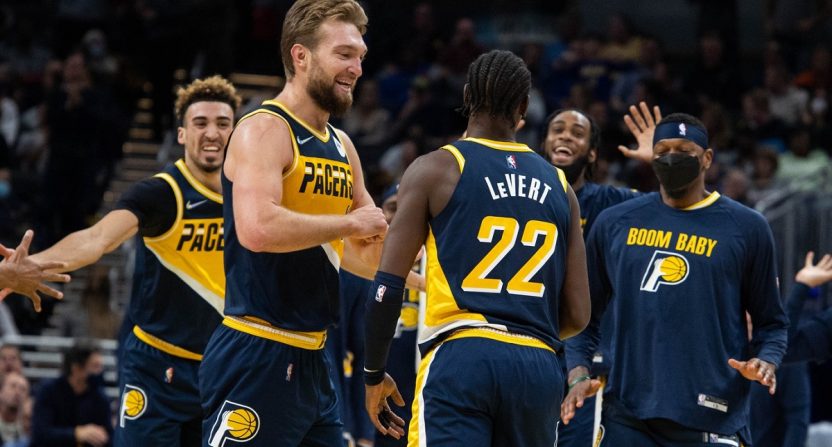 The Indiana Pacers improbably ended up at the center of the NBA conversation last week.

After a report from The Athletic noted Indiana would consider trading key pieces (specifically Caris LeVert and either Domantas Sabonis or Myles Turner), an even deeper dive from The Athletic’s Jared Weiss looked at Turner’s situation specifically, and the Pacers roster situation more broadly.

Weiss got a lot of people on record for his report, including Pacers president of basketball operations Kevin Pritchard, who has been running the team’s basketball side since 2017 and has been with the front office since 2011. Some of Turner’s quotes about wanting to be more than a “glorified role-player” made the social media rounds, even though they painted Turner’s overall position (that he wants more but would be more than happy finding more while remaining in Indiana) in different light.

But Kevin Pritchard’s quote here may have been the most impactful, in the end, and it was fairly startling to hear a team executive on the record midseason saying something like this:

“At some point in time, we’ve got to figure out how to manufacture that real star,” Pritchard said. “We had it with Paul (George). He had an ‘it’ factor and so did Victor (Oladipo) and so we’re trying to get that. But we think that a couple of these players could become that too. We may have it already in the gym. But that’s the biggest challenge is, in this sort of marketplace, how do you get a star? It’s hard for us to sign one in free agency, that’s a challenge. But there are other ways to do it, and I think we can do it.”

Pritchard is certainly very candid and transparent, so if any exec was going to come out with something like this, it was probably him. And he’s not really wrong; Domantas Sabonis has made two consecutive All-Star teams, but he was also the hub of the team last year that lost in the Eastern Conference play-in game. The coaching was bad, yes, and new coach Rick Carlisle’s work this year has probably not emphasized Sabonis to the degree the player would like, but Indiana is still just 12-16.

But there are other factors there too; the underlying analytics suggest that the Pacers should actually be at or above .500, and their abysmal record in close games and in crunch time might even out throughout the year. But coming out on the record and saying that about your current roster is not the kind of thing that tends to play well. Ironically, though, the Pacers played very well last week, going 3-0. Sabonis today was named the Eastern Conference player of the week:

Los Angeles Lakers forward LeBron James and Indiana Pacers forward/center Domantas Sabonis have been named the NBA Western and Eastern Conference Players of the Week, respectively, for Week 8 of the 2021-22 season (Dec. 6 – 12). pic.twitter.com/EQhB2pqXPF

Fellow trade rumor name Caris LeVert was a finalist as well. Sunday night, Pritchard took to Twitter to try and clarify his meaning, apologizing for his word choice in the process.

2/better. The point specially was so believe we can close games at higher levels and if we do our record will reflect it. Could i have used a better word than “stars” probably. When you get interviewed for hours your prob gonna slip up.

2/better. The point specially was so believe we can close games at higher levels and if we do our record will reflect it. Could i have used a better word than “stars” probably. When you get interviewed for hours your prob gonna slip up.

3/ I speak with our players everyday and i felt bad for using that word.

4/ an appropriate apology was sent. No one believes more in this team…

It’s not often you see a team exec jump on Twitter to offer a clarification and apology, but Pritchard had clearly seen how his quote had been interpreted, and wanted to get on the record. That desire to either shape or guide the narrative is probably why the original story last week about the Pacers looking to “rebuild” came about; it’s a stretch to assume it was a coincidence that leaked right before a much deeper dive came out that would clearly have sent waves around the league that the Pacers might have starters like Myles Turner pushing to leave.

So, instead, the team might have preferred treating it as a calculated decision to consider moving players, months before the deadline, in an effort to maintain trade leverage and jump the market of sellers a bit, should they decide to go that route. It felt more like a media strategy designed to keep their options open.

Similarly, the quotes from the Weiss piece felt a lot like an executive who has sort of made transparency and communication his brand; it’s been known for a while that the Pacers prefer to talk to players when their names come up in trade talks, as opposed to keeping everyone in the dark until a move is or isn’t made. On one hand, that makes sense; if the players know they’ll hear from Pritchard when rumors are legitimate, they can trust that any outside rumor that pops up is false. On the other hand, it might get old for players to consistently be told the team is considering moving on.

Honesty and transparency have diminishing returns in a business where the entire goal is to beat all of the other organizations at all times. And players like Domantas Sabonis (under contract for two more seasons after this one and clearly the team’s best player) probably don’t need their own team executive being even inadvertently critical of them in the media.

To his credit, Pritchard knows this, hence the private apology and public clarification. It was a misstep, and considering how rarely team executives are as open as Pritchard is, those should be forgiven. The problem, though, is that players might not forget.