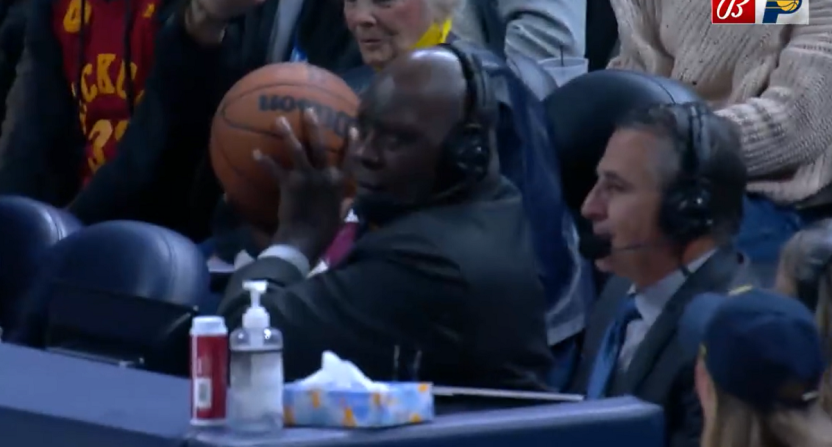 Football tends to dominate the weekend content this time of year, which is how something smaller like an NBA analyst expertly snagging an errant pass can go unnoticed.

In this case that’s Quinn Bucker, longtime Indiana Pacers color commentator, who grabbed a T.J. McConnell bullet pass that would have otherwise sailed into the seats behind him.

As a Pacers fan, I saw this happen live watching the Bally Sports Indiana broadcast on my laptop but thanks to Mark Schindler for pulling this clip of the replay.

The zoom on Buckner’s face made me laugh harder than anything has in a while on a basketball broadcast. As does the fact that Quinn is very, very clearly ready to go to work with that ball on the wing if necessary; classic triple-threat position.

Behind Buckner, as others noted: franchise icon and former executive Nancy Leonard, wife of the late longtime Pacers analyst (and franchise icon himself Slick Leonard.) She couldn’t seem more unfazed.

Nancy Leonard looking over like this is no big deal makes it even funnier https://t.co/zIqoqKlQf4

Over the course of a long season with local broadcast teams (and while the NBA isn’t as long as an MLB season, it certainly still counts as long) you’ll get a handful of moments that stand out as fun or weird or both. This one will certainly stand out for me, thanks to Buckner’s face and the impressive camerawork.

We’ve written about Buckner before for a variety of reasons, but it’s worth noting again that he’s maybe the platonic ideal of a team analyst. His work with Chris Denari and reporter Jeremiah Johnson is always outstanding. Yes, again, I’m an Indiana fan. There’s going to be bias. But I also watch a lot of sports with a critical eye on the broadcasts, and Indiana’s crew is pretty much exactly the right mix of focused on the game itself while still being loose enough for the occasional aside.

Buckner doesn’t rely on shtick, either; sure, he breaks out a smothered chicken call for truly spectacular blocked shots, but that’s about it. He and Denari aren’t homers, either. By that I don’t mean they call games as if they were doing a national contest. They’re clearly viewing the action through the Indiana lens, as they should. But they also don’t fall into the trap of ripping officials for every call against the Pacers. Buckner, especially, has no qualms pointing out when a Pacer is complaining about a foul call they should just accept.

That’s why their booth gets routine praise from national writers like Zach Lowe during preseason roundup pieces. The real NBA grinders who scan League Pass and end up exposed to the variety of NBA booths are the best source for comparison, and while I don’t watch to that level, I’ve seen enough to know that I’m lucky as a fan.

Almost as lucky as whoever that McConnell pass would have drilled if not for Quinn’s basketball instincts and muscle memory still being rock solid at the age of 68.