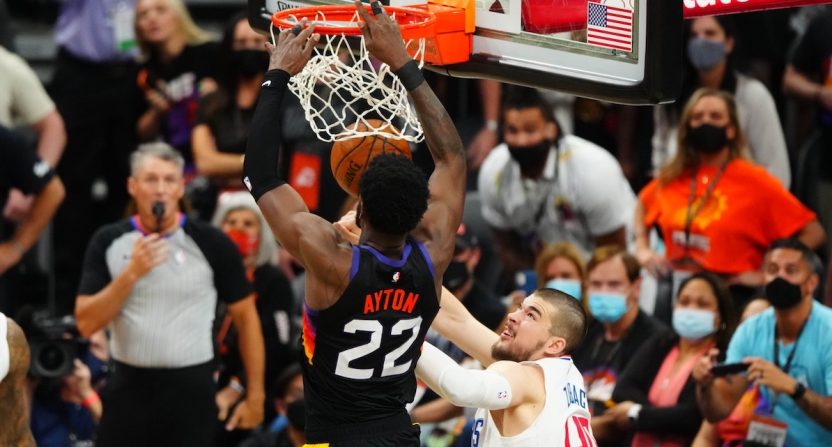 The Phoenix Suns provided one of the most spectacular finishes ever seen in an NBA playoff game Tuesday night, defeating the Los Angeles Clippers, 104-103, in Game 2 of their Western Conference Finals series.

Deandre Ayton’s game-winning dunk was a masterclass in execution, resulting from a perfect inbound lob pass from Jae Crowder and a screen set by Devin Booker. Under any circumstances, it would be a magnificent play. But with the game on the line and 0.9 seconds remaining in the game, the alley-oop dunk is already legendary.

If you watched the memorable finish on ESPN, you heard the exuberant call from Mike Breen. (“He puts it down! He puts it down!”) But it’s always fun to hear how a buzzer-beating shot and big win sounds from the local radio call.

On the Phoenix side, that call came from Al McCoy, who’s called radio play-by-play for the Suns through the team’s entire existence. As Timothy Burke points out, fans listening to the Suns broadcast (flagship KTAR, 98.7 FM) with no visual accompaniment might have had difficulty visualizing what happened.

I'm not sure Suns fans listening at home on radio had any idea of what happened on this play? pic.twitter.com/7Mq3Fe4T5v

To be fair, the moments right before the play were a frenzy. Analyst Tim Kempton was apparently concerned with players coming off the bench, while McCoy called the action.

But McCoy stayed focused on the play. He wasn’t able to exactly describe what happened, though he did say Crowder lobbed the ball inbounds. Kempton’s reaction made it obvious that the shot was good and McCoy was able to fill in the blanks afterward.

For the Clippers, the radio play-by-play came from Noah Eagle on flagship KLAC 570 AM:

Eagle described the play a bit more clearly, setting the scene with Crowder inbounding the ball while defended by Demarcus Cousins. He also explained that Ayton dunked what turned out to be the winning basket in addition to the confusion over whether or not the Suns center committed offensive interference because the ball was above the rim.

Finally, Mark Jones had the call on ESPN Radio:

And your ESPN Radio call: pic.twitter.com/gcDG8mjuE9

Jones also did a good job of telling listeners how the play was set up before it began. However, he didn’t mention that Ayton dunked in Crowder’s lob pass, only that the shot went in but wasn’t immediately clear whether it counted.

Each of the three calls is an interesting study in contrast. With the Suns’ call, there was the hometown exuberance of the game-winning basket, even if the scenery and action weren’t described very clearly. The Clippers’ broadcast called the play more precisely. Yet we don’t know if Eagle had a better vantage point than McCoy for the action. He also didn’t have an analyst shouting over him while trying to call the play.

Though neither call had an immediately quotable sentence, each did their best in attempting to describe a very hectic scene at the end of the game from their respective team’s point of view.