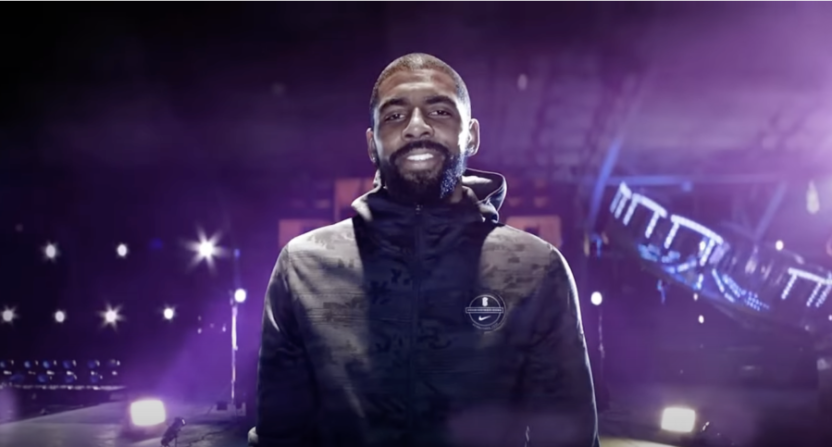 Editorial note: This is another contribution from Twitter user @velodus. If you’re interested in writing for us, please email awfulannouncing@gmail.com with your pitch!

Kyrie Irving is a modern-day tragedy. He’s one of the most talented, skilled, aesthetically-pleasing basketball players any of us have ever seen; he’s also, it would seem, completely out of his mind. The Nets point guard has become so radicalized that he recently shared a movie with his 4.6 million Twitter followers that were so antisemitic that it at one point cited Adolf Hitler for proof that Jews have a plan for “world domination.” This came weeks after Irving shared an Alex Jones video purporting that there were “secret societies” in America – a claim he’s since said that he stands by – and a year after Irving refused to get the Covid-19 vaccine, which came after Rolling Stone reported that he “started following and liking Instagram posts from a conspiracy theorist who claims that ‘secret societies’ are implanting vaccines in a plot to connect Black people to a master computer for ‘a plan of Satan.’”

Irving’s conspiracy-dabbling has escalated to the point that it’s not only jeopardizing his career but is putting actual, real-life people in harm’s way. The danger he represents isn’t just that he’s a conduit for disinformation and hate speech, but that he’s popular enough that impressionable people are going to listen to him. Scan the replies of any story about him on Twitter and you’ll see legions of Nets fans and NBA fans who suddenly, spontaneously believe that the documentary he shared – the one that, again, cited Hitler – might’ve made some good points about the Jews. Indeed, just search Irving’s name on Twitter and you’ll see, in real-time, how many people who ordinarily wouldn’t think twice about spreading antisemitism now believe that the real victim here is Irving for being punished at all.

It’s an awful situation for the NBA and the Nets that are liable to get even worse, but it’s worth keeping in mind that this situation didn’t manifest out of nowhere. Indeed, all of this could have been foreseen way back in 2017, when Irving first dipped his toes into the pool of conspiratorial thinking by proclaiming, in a sit-down with the Road Trippin’ podcast, that the Earth is flat. “What I’ve been taught is that the earth is round,” he famously said at the time. “But if you really think about it from a landscape of the way we travel, the way we move, and the fact that, can you really think of us rotating around the sun and all planets aligned, rotating in specific dates, being perpendicular with what’s going on with these planets … There is no concrete information except for the information that they’re giving us. They’re particularly putting you in the direction of what to believe and what not to believe. The truth is right there, you just got to go searching for it.”

In retrospect, it’s easy to see this as the turning point in Irving’s career, as the gateway conspiracy that led to all the others he’s since subscribed to. Believing that the Earth is flat may not be as hateful or inflammatory as believing that Jews are diabolical monsters or that the Covid vaccine was a plot to enslave Black people, but the baseline rejection of reality is the same. To deny something as basic and fundamental as the Earth being round is to be liable to reject anything or likewise believe anything. Once you believe that you’re living on a flying carpet in space that no one’s ever found the end to and that it’s just a weird coincidence that the sun sets in one direction and rises in another, once you feel in your heart of hearts that professional scientists can’t be trusted but random science-deniers in the deepest darkest corners of the internet can be, believing that Jews rule the world not only isn’t much of a leap, it’s the logical endpoint. And in fact, if Irving were to go even further one day, if he were to endorse QAnon or suggest that the 2020 election was stolen, none of us should be surprised.

What’s interesting though about Irving’s flat-Earther days is that back in 2017 and 2018, very few people in and around the NBA seemed to grasp the danger of what Irving was doing. In fact, most people didn’t even think he was serious, or that he wasn’t just trolling everyone – a notion he himself would occasionally flirt with. The idea that anyone could seriously believe that the Earth was flat was seen as so preposterous that, if anything, people found it amusing that he was actually saying it. LeBron James, who was Irving’s teammate at the time, publicly joked with him about it and even defended Irving in an interview with ESPN, saying, “He’s my All-Star point guard, superstar point guard, and if he decides he wants to say the Earth is flat, so be it. He’s an interesting guy, and he believes it.” Draymond Green said Irving might’ve been onto something, saying, “I haven’t done enough research, but it may be flat.”

Even NBA commissioner Adam Silver downplayed and rationalized Irving’s podcast comments. “Kyrie and I went to the same college [Duke]. He may have taken some different courses,” Silver was quoted as quipping. “In all seriousness, he was trying to be provocative and I think it was effective. I think it was a larger comment on the sort of so-called fake news debate that’s going on in our society right now … personally I believe the world is round.”

The media recaps about Irving’s statements were similarly skeptical, with few hinting at any kind of danger and many of them finding what he said harmlessly fun. “So is this bad? And why does it matter?” Micah Peters asked himself in a 2017 piece with The Ringer, before unfortunately concluding, “Well it’s not bad, not really. But it’s not strictly speaking good, either.” “We are not convincing Irving the globe isn’t flat,” Ben Rohrbach wrote after Irving doubled down on his claims, “which is cool, because it’s much, much funnier that way.” When Irving went on Jimmy Kimmel Live! shortly thereafter, Kimmel playfully handed Irving a basketball with a globe painted on it. And when Irving again repeated his claims later that year, The Jump did a segment on it with the description “Kyrie Irving continues to claim the earth is flat, but Rachel Nichols and her guests aren’t buying that he really believes it.” Irving’s comments were looked at so frivolously that Nike even embraced them, playfully creating a commercial and a display for his new shoe that winkingly referenced his comments that the world was flat.

Indeed, one thing that struck me, in looking back at articles and videos about Irving’s comments from 2017 and 2018, is how almost nobody saw the threat of what he was saying, and how even fewer people actually condemned him for it. Even those who recognized the danger of one of the most famous athletes in America spreading a clearly bonkers conspiracy theory mostly just shook their heads at him, tsk-tsking him as though he was a rambunctious prankster who was taking things slightly too far and who couldn’t possibly believe such crap. In retrospect, the way the media but especially those in sports treated Irving’s comments was frighteningly naive.

Far from being “canceled,” Irving was indulged and accommodated. For over a year, Irving danced with reporters and journalists about the Earth being flat, and while the topic of conversation always revolved around the question of “Is he serious?”, the larger point – that it didn’t really matter if he believed it or not so long as he was spreading it and mainstreaming it – went ignored. A 2017 Morning Edition segment reported that some kids in school were suddenly believing that the world was flat because they had heard it from Irving, and for that alone, Irving should have been harshly criticized and reprimanded. Instead, no message was sent and Irving came away from his first public dalliance in alarming, conspiratorial thinking utterly unscathed.

Had people been more aware and more critical of what Irving was doing back in 2017, it’s entirely possible that the situation he’s currently in could’ve been avoided. We’ll never know and perhaps that’s optimistic thinking. It’s possible that Irving’s slide down the rabbit hole of antisemitism might have been inevitable. Maybe intense media criticism wouldn’t have changed his mind, as it certainly hasn’t done much to veer him off his most recent conspiracies. But if nothing else, if he had actually gotten hammered for his flat-Earth comments in 2017, if there had been legitimate outrage from his peers and contemporaries, Irving might not have felt comfortable enough to continue airing his latest and greatest conspiracy theories in public like he’s been doing.

Even if he still agreed with the idea that Hitler made some good points or that Satan had a hand in the Covid vaccine, Irving might have very well kept those thoughts to himself and saved hundreds or thousands of other people from getting radicalized and walking down his path. It’s possible that we’d be living in a world where we have no idea what he thinks about such things, and that’s a world I think we can all agree is better than the round one we’re currently living on.