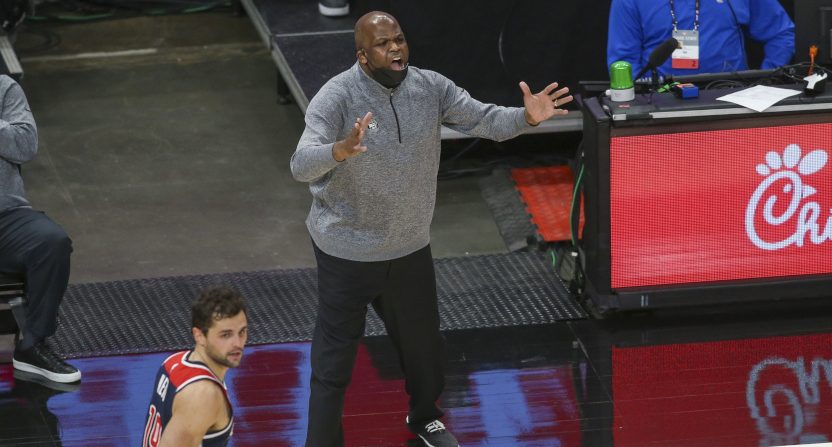 There have long been theories that the NBA and its media partners would like teams from its largest markets to go further in the playoffs. The NBA is of course too smart to openly state that, but some people associated with those media partners aren’t, leading to silly statements like one media member claiming that the league is “better” when the New York Knicks are good. (Which is an incredibly dumb thing to say as someone theoretically covering the whole league!) And that then leads to questioning of if the NBA wants particular teams to win, and in the case of Atlanta Hawks’ coach Nate McMillan (seen above during a May 10 game against the Washington Wizards), that’s now led to a $25,000 fine ahead of his team’s first-round series against the Knicks:

Hawks coach Nate McMillan was fined $25,000 for these comments when asked about the national media picking the Knicks to win the series. pic.twitter.com/nKOKEmsIsA

The thing is, McMillan’s comments are largely true when it comes to “wants.” If the NBA league office had the ability to pick who would be in the playoffs, or if their broadcast partners had that ability, the Knicks would certainly be high up on the list. But there’s a difference between saying someone “wants” this and implying that they’re doing something to make it happen, as the Knicks’ entire recent dismal history shows. And the league and those broadcast partners don’t actually have the ability to boost particular teams, and there has never been any credible evidence published that the league or its broadcast partners have tried to help particular teams.

Perhaps the closest example of attempted NBA intervention for a particular result comes from former NBA referee Tim Donaghy’s allegations about match-fixing in the 2002 Western Conference Finals. But those allegations have never been convincingly proven, and Donaghy has done a whole lot to undermine his own credibility since then. And, really, trying to intervene to help particular teams seems like a bad bet for both the NBA and its broadcast partners.

Yes, there are perhaps some short-term gains for the league from better television markets making deeper runs. But if convincing proof of league or broadcast partner intervention was ever published, that would be a catastrophe for their public image that would far outweigh any gains here. So this doesn’t feel like something that’s all that likely. And if there ever actually was market-based intervention, it’s unlikely that it would be about boosting #1 DMA New York over #7 Atlanta; it would come up when a team at the lower end of the market spectrum was involved.

So it’s understandable why the league fined McMillan here. These comments definitely crossed a line from “League and broadcast partners would like to see the other team win” to “They’re trying to make the other team win.” And that fits in line with some recent fines we’ve seen in other leagues, such as the $250,000 the New York Rangers lost for calling NHL VP George Parros’ non-suspension of Tom Wilson a “dereliction of duty,” a statement so outside the norm that the team president and GM both tried to distance themselves from it (before getting fired). So at least McMillan only lost 1/10 that amount.

But at the same time, though, this may be a worthwhile fine for McMillan to take. Yes, there’s nothing to support his assertions that outside forces are intervening in favor of the Hawks’ opponents, but $25,000 isn’t that much for a NBA head coach to pay, and maybe the fine helps boost a “Nobody believes in us!” locker-room speech that helps the Hawks advance (and if they do, the rewards for McMillan could far exceed a measly $25,000 fine).  He absolutely can say this if he wants to, and maybe it will be worth the price tag. But there’s no actual evidence that the NBA’s intervening to help the Knicks, and until such evidence emerges, claims like this should be taken with a whole lot of salt.