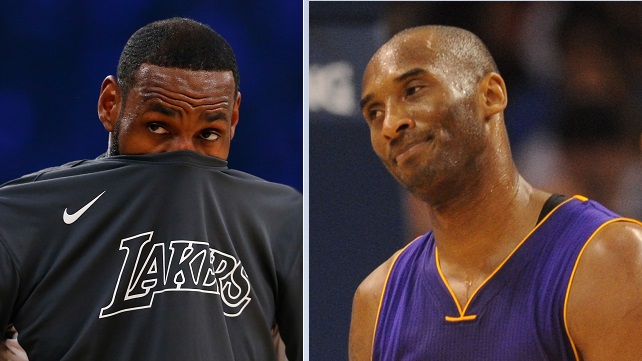 In the rush to report news quickly and beat out competitors, especially in the social media era, news outlets sometimes make mistakes or relay erroneous information. Unfortunately, the same happened on Sunday afternoon following the news of Kobe Bryant’s death.

From a visual standpoint, the most glaring example of this came from the BBC. During its “News at Ten” program, the network showed photos of Bryant alongside game footage of… LeBron James. Wrong guy, folks.

Well, the BBC got the uniform right, showing a superstar performing for the Los Angeles Lakers. The jersey number was close, with LeBron’s No. 23 only one digit off from Bryant’s No. 24.

No, come on — this was a horrible, embarrassing mistake for any news outlet to make in the face of tragedy, let alone one as established as the BBC. It looked like the network mixing up two black guys who happen to wear the same uniform.

After the clip aired and was posted to social media, thousands responded to the egregious mistake.

I grew up playing basketball and now that I’m living in the US, I was wondering how British media would report on the death of #KobeBryant. Didn’t have this in mind. https://t.co/47IUJcAI0T

Deeply unfortunate mix up from BBC. They got two big, Black men confused and featured Lebron James instead of late Kobe Bryant in this news segment. This only adds to our collective grief at this time. Has a correction and apology been issued yet? Shame. pic.twitter.com/jCUejPKWc4

British politician David Lammy later criticized the BBC for a lack of black producers and editors for the mishap.

Kobe Bryant and LeBron James don't even look similar. If the BBC hired more black producers and editors, appalling mistakes like this simply would not happen.pic.twitter.com/kdX6e5XNnf

Soon after the news clip circulated online, BBC “News at Ten” editor Paul Royall apologized for the gaffe, attributing it to “human error.”

In tonight’s coverage of the death of Kobe Bryant on #BBCNewsTen we mistakenly used pictures of LeBron James in one section of the report. We apologise for this human error which fell below our usual standards on the programme.

BBC reporter Robert Rea clarified that the snafu was noticed immediately in the newsroom and was quickly replaced for subsequent broadcasts.

To be clear, one producer on the Ten o'clock News missed it. The rest of the newsroom said "that's not Kobe Bryant" the moment it was broadcast. My team on the News Channel replaced the offending pictures immediately so they wouldn't be re-broadcast

According to Deadline, BBC News anchor Reeta Chakrabarti issued an on-air apology at the end of the newscast.

“In our coverage of the death of Kobe Bryant, in one section of the report, we mistakenly showed pictures of another basketball player, LeBron James,” said Chakrabarti. “We do apologize for the error.”

Perhaps the most upsetting bit of misleading reporting was from ABC’s Matt Gutman, who told viewers that all four of Bryant’s children “were believed” to be on the helicopter with him when it crashed, killing all nine people on board.

That incorrect information was eventually corrected by subsequent reports from other outlets. Initially, ABC did not issue any sort of retraction nor apologize for relaying the wrong news, which drew heavy criticism on Twitter from viewers and media critics.

Here's what ABC reporter Matt Gutman is reporting about the Kobe Bryant helicopter crash and his daughters:

"…and the fact that 4 of his children are believed to be on that helicopter with him…." pic.twitter.com/6ETCqw21Aj

However, several hours later, ABC did issue an on-air correction and Gutman apologized on Twitter for reporting the wrong information.

Today I inaccurately reported it was believed that four of Kobe Bryant’s children were on board that flight. That is incorrect. I apologize to Kobe’s family, friends and our viewers. pic.twitter.com/yYwuB9vpZl

“Earlier, I reported that it was believed that four of Kobe’s children were on that flight. That is incorrect,” Gutman said. “Unfortunately, this is a horrible tragedy and one of his daughters was on the helicopter at the time. Obviously, they’re still working this investigation – the NTSB is coming, the FAA is already on scene. The coroner is going to make the final determination of who exactly was on that plane. But again, I apologize for those remarks earlier about Kobe’s family on that helicopter.”

During a time when the perception of media outlets is at a low point among many consumers, such irresponsible errors don’t help the reputation of news organizations attempting to report factual information. Additionally, conveying incorrect information like this affects those whose loved ones were involved. Did any family of the other eight passengers aboard that helicopter believe that their relatives may have survived because of what was reported? This kind of news needs to be treated carefully and sensitively, and such consideration was lacking in the mistakes that were made.

Media outlets shouldn’t need to be reminded that they always need to do better. The tensions among citizens, politicians, and media about the news that’s reported is already extremely heightened. Sadly, mistakes like this confirm why such distrust exists in many circles and needs to be repaired.