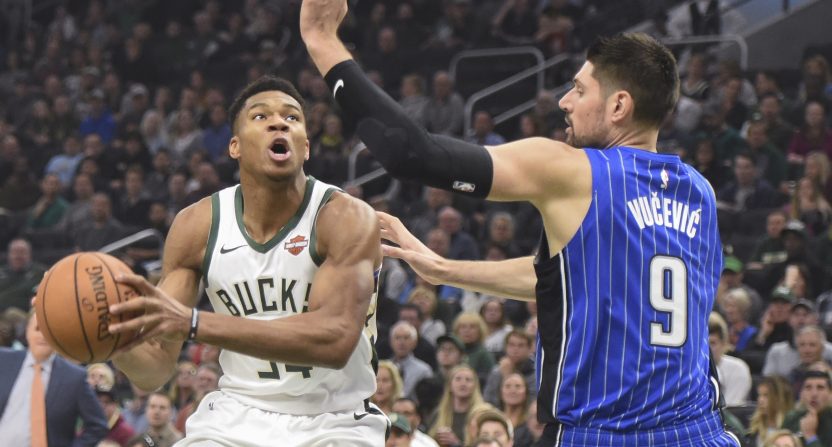 We’re starting to see some interesting trends now that we’re a little over two weeks into the 2018-2019 NBA regular season. With the first full calendar month of the campaign about to begin, we’ll see which surprising starters have staying power and which contenders off to a slow start can quickly turn things around.

Are the Raptors and Bucks this good in the Eastern Conference? Are the Wizards this bad? The longest winning streak in the Western Conference other than the Warriors belongs to…the Sacramento Kings? Our 10 games to watch in November feature nearly all the most important NBA storylines, including LeBron James’ first trip to Cleveland as a Los Angeles Laker.

What didn’t make the list but deserves an honorable mention is Minnesota’s game at Golden State on Friday, an ESPN telecast, where the Jimmy Butler saga takes the national stage. After sitting out at Utah on Wednesday, will he suit up? How will Derrick Rose follow up his career-high 50-point game? Anyway, on to the list:

Everything is working for the undefeated Bucks right now under new head coach Mike Budenholzer. They’re averaging nine more possessions per game than last year and are up to 4th in the league in pace. And that quick pace has not only unleashed Giannis Antetokounmpo, but also forward Khris Middleton, guard Malcolm Brogdon, and new starting center Brook Lopez, who’s hitting 38.6 percent of his threes on over six attempts per game.

The Celtics are 5-2 as they look to form a consistent rotation with Kyrie Irving and Gordon Hayward back in the lineup. Thus far, Boston is the only team in the league holding opponents to under 100 points per game. Can they do that against a Milwaukee team putting up 120?

We know the Cleveland Cavaliers’ excuse for having the worst record in the league. What’s the Washington Wizards’? John Wall and Bradley Beal are still around, yet Washington is 1-6 with the worst scoring defense in the NBA. What gives?

You know what a team filled with angst and drama and turmoil could really use? The season debut of Dwight Howard, which happens Friday against the Thunder, who have won two straight after starting 0-4. Like last season, OKC is off to a poor start on offense, which should get corrected with time.

It’ll be fascinating to see how two of the most gifted defenders in the game, Draymond Green and Kevin Durant, match up against Antetokounmpo. But it’ll also be a big litmus test to see how real these Bucks are. Can they defend Stephen Curry and Klay Thompson, the new single-game 3-point king, beyond the arc? Milwaukee is known for its length defensively, and obviously taking on the Warriors is the greatest challenge. This game is gonna be hyped up like crazy next week, and rightfully so.

Gordon Hayward never got to play in Salt Lake City as a member of the Celtics because of his leg injury last year that cost him the season, but he’ll do it this time (we hope) in a clash of two of the league’s top defenses. On the offensive end, the game boasts two of the elite young scorers in the NBA, Jayson Tatum and Donovan Mitchell. The Jazz are off to a slow 4-3 start, but have only played two of their games thus far at home.

Ahh, the Rockets. Where to begin? Houston is 1-5. Chris Paul was suspended, James Harden got hurt, they’re 0-4 at home, their defense is struggling, and only two teams in the Western Conference are scoring fewer points per game right now than last year’s conference finalists.

Houston already abandoned its switch-everything defense that worked well against Golden State in the playoffs last year, in part because the personnel on defense isn’t as good now, with Carmelo Anthony partially to blame for that.

The Rockets have two weeks to figure things out before their rematch with the Warriors. Good freaking luck.

The Raptors are off to a tremendous start under new head coach Nick Nurse, ranking 4th in offensive efficiency and 7th on defense. Obviously Kawhi Leonard is a major reason why, but it extends to the fast starts of new acquisition Danny Green and veteran center Jonas Valanciunas. Despite its 5-2 record, the Celtics are really struggling offensively, 29th in points per game and 27th in efficiency. And, of course, the way these two teams are playing, this could easily be a conference finals preview in the new LeBron-less East.

We can’t have a November NBA preview without discussing how amazing DeMar DeRozan has played for the Spurs thus far. With San Antonio unbelievably thin, DeRozan took over primary playmaking responsibilities and is averaging career highs in points, assists and rebounds for the 5-2 Spurs. At this rate, he has to get legitimate MVP consideration.

On the other side, New Orleans is embracing the new turbocharged NBA to the tune of second in scoring, third in offensive efficiency and 4th in pace. Nikola Mirotic is scoring an unreal 23 points a game, E’Twaun Moore and new point guard Elfrid Payton are off to good starts and new signing Julius Randle is averaging nearly 17 points per game off the bench. If you have League Pass, this should be a compelling matchup.

The last time LeBron James returned to Cleveland as a member of an opposing team, this happened in 2010 with the Heat.

Now that he’s won a championship with the Cavs, delivering on his life-long promise, the reception for James when he comes to Cleveland on Thanksgiving eve as a member of the Lakers should be quite different. Expect an outpouring of love and support for LeBron, even though he’s the biggest reason why the Cavs are so damn dysfunctional right now.

During Golden State’s current dynastic run, there hasn’t been a player during the NBA Finals that could truly shut down a Curry or a Durant. The Raptors have that in Leonard, the best defensive player in the league, and possibly one of the best perimeter defenders ever.

With Toronto off to such a strong start behind Leonard, it’s definitely not out of the question that this could be an NBA Finals preview. And if it is, how Kawhi defends Golden State is going to be a major topic of discussion.

Despite people talking doom and gloom about the Blazers, they’re off to a nice 5-2 start and are in the top 10 on both offense and defense. When talking about Portland, you never worried about how good the backcourt of Damian Lillard and CJ McCollum would be, but how much the team would get from its supporting cast. Center Jusuf Nurkic is nearly averaging a double-double on his new contract, free agent signing Nik Stauskas is finally living up to his Michigan-era hype as a consistent knockdown shooter and second-year big Zach Collins is off to a really strong and encouraging start.

The 6-1 Nuggets have been super fun to watch this season and are the only team to beat Golden State this season. They’re really improved defensively and Nikola Jokic may be the best passing big man of our generation. He’s currently averaging over 21 points, 10 rebounds and seven assists per game. Definitely tune in to this.