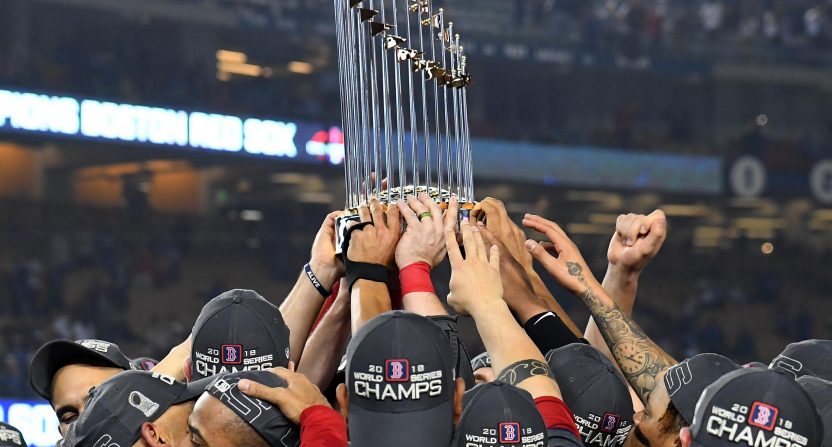 The final ratings for the World Series are in, and by historical standards, they’re very weak. As per Paulsen of Sports Media Watch, the ratings for the series at a whole were the third-worst on record (since 1972), and the Fox-only (so not streaming) viewership was the fourth-lowest on record:

The FOX-only audience ranks as the fourth-smallest in World Series history, ahead of 2014, 2012 (12.7M) and 2008 (Phillies-Rays: 13.6M). The combined average across all Fox platforms was not immediately available.

Beyond that, there’s the overall declining viewership across TV (something that’s important context in all ratings discussion; with the expansion of streaming programming and other alternatives, even sports properties with year-over-year declines still look good relative to lots of other programming, still hold a decent share, and are still valuable to advertisers). There are also discussions about the broadcasters, the length of games and more. And Fox Sports executive vice president (research, league operations and strategy) Mike Mulvihill told Sports Business Journal‘s Eric Fisher he thinks there are multiple factors involved:

There are a number of things going on. It’s possible the national appeal of the Red Sox is not quite what it was in [prior title years of] 2004 or 2007 or even 2013. And we are seeing less this year from New York and Chicago, two very important markets, after the Yankees and Cubs bowed out of the playoffs earlier than they did last year. But when you also look at things, at the shares being down a lot less than the viewership is, it tells you that we’re talking about a rather different type of viewing situation overall. And I think the factors around this are less about baseball specifically and more about trends around TV usage broadly.”

(One really interesting sidenote from that SBJ piece; the record-long Game 3 “peaked among all audiences including kids 2-11 and teens 12-17 around 11:30-11:59pm ET,” and “recorded a higher average audience, 14.13 million viewers, between 11:00pm-2:10am than its average of 12.28 million viewers prior to 11:00pm.” So the idea that games running late on the East Coast is what’s hurting ratings is once again proved wrong. This will not stop the likes of Phil Mushnick and Chris Russo repeating that theory, though.)

With all that said, though, this is still a disappointing result for Fox. The line about the New York and Chicago markets is about the overall playoffs, not the World Series, and it’s not relevant to the decline from last year’s World Series (the Cubs were in the World Series in 2016, but last year was Astros-Dodgers, and the only recent New York appearances are the Mets in 2015 and the Yankees in 2009). This was a matchup of the second (Los Angeles) and 10th (Boston)-biggest media markets in the U.S., as per Nielsen, and both teams are strong inside their markets and have a significant amount of fans outside their home market.

Thus, this should have been a dream outcome for Fox. Instead, it was a nightmare, at least compared to historical numbers. And one of the big questions for baseball going forward is if this was a particularly bad ratings draw for some reason, or if this is likely to be closer to a new normal for the World Series. Of course, it’s not a sky-is-falling scenario, considering that so much of MLB’s revenue is from local regular season TV deals (where across-the-board ratings actually rose two percent this year) and considering that even these declining World Series ratings are still very good compared to much of television (not Sunday Night Football, though, which beat the clinching Game 5). But it’s not great for MLB or Fox that what looked like such a promising matchup turned out to be a dud.