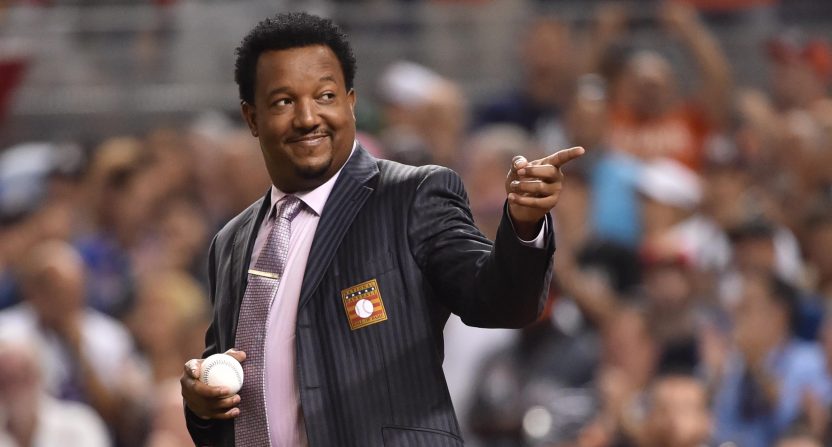 Pedro Martinez got into broadcasting by accident.

Not long after his 2009 retirement, the 47-year-old Hall Of Fame pitcher was in Atlanta with his agent hanging around while a fellow client, he thinks it was Ivan Rodriguez, was auditioning for TBS’ MLB coverage in front of Tim Kiely, Turner’s vice president of production and executive producer.

“While they were doing what they were doing and the director, TK, actually came over and said ‘let me hear, Pedro, what do you have to say about this situation,” Martinez said while holding court at the head of the table for a media lunch last week in Midtown Manhattan. “I was just hanging with my agent, who was doing something else. I didn’t know I was going to like that!”

Martinez is now in his seventh season doing studio work for TBS, the fourth with the team of Casey Stern, Gary Sheffield and Jimmy Rollins. And based on his standout playing career, it seemed like broadcasting would be Pedro’s least likely post-career path.

“In my years of playing, if I could shy away from doing media, it would be great,” Martinez said. “But I would always give you an honest answer and things would come from my heart, including calling the Yankees my daddy. Whatever I said, I meant.”

Martinez called Kiely a genius for not just bringing him into the fold, but also realizing that there was a real lack of Latin American and Spanish speaking representation on national broadcast teams and studio crews.

“TK also realized that I could probably influence the Spanish community,” he said, including speaking Spanish on air. “He said you’re so outspoken and so talented that you might be like Charles Barkley.”

Martinez knew that as a clean superstar in the steroid era, he had a good reputation in baseball and among his peers, and broadcasting could be a way to stay in the game while not committing to the rigors of a 162-game season.

“My duties are done in baseball,” Martinez said, while claiming many teams have asked him to be a pitching coach. “I could go every once in a while to have fun and be a part of baseball but 162, I already paid my dues. I did 18 years plus Minor Leagues. Long enough.”

The Dominican Republic native tried it and found that after a year of shying away from the media, being a member of it was very much in his wheelhouse.

“Quickly, I found myself a good host with other former players and I found myself talking about what I knew, baseball and situations,” Martinez said.

Over the course of two hours, the former Dodgers, Expos, Red Sox, Mets, and Phillies pitcher had a lot to say, so here are a few brief excerpts from his talk:

“54,000 people screaming ‘who’s your daddy?’ And the stadium’s shaking. And you have to go two inches off the black. And then you have to be able to block everything out, and I was able to. I enjoyed it…I said here we go. I’m going to strike out this one, and the next one. And let’s see what happens.”

On pitching for the Phillies in 2009

“They abused me, to be honest. I spent 17 days without pitching, then they drop me in Dodger Stadium, seven something innings. Then they had me waiting 13 days and pitched in Yankee Stadium. For a guy that’s used to pitching every five days, a veteran who was rusty and not playing all year, 13 days. I go to Yankee Stadium, ‘who’s your daddy? Who’s your daddy?’”

“All of a sudden I’m in the sixth inning, an old rusty veteran and I gave up a bloop and a homer, but I pitched a decent game. And as I’m coming out of the game, they go ‘who’s your daddy?’ For an old rusty guy that comes over and pitches the sixth inning, you’re chanting who’s your daddy over two runs? I started laughing. These guys have really had it with me, so I started laughing.”

“I remember in the last game, I was so sick. We had the swine flu, our muscles. It was like six of us, had the swine flu. But we couldn’t tell anyone, and I went out to pitch like man, this was dangerous. So they took me out in the fourth inning. That was my last game. And that was fun.”

On being clean during the steroid era

“I had many reasons to take steroids, because I was smaller, I was told I wasn’t gonna make it, ‘you’re not gonna last in the big leagues, he’s too fragile.’ I had all the reasons in the world to use steroids. And I didn’t. And I kick and scratch and I’ll drill you and I’ll move you off the plate just to get to pitch. And as a matter of fact, I got charged to the mound a lot of times. Probably more than anybody. Got my butt kicked in the bottom of piles. It doesn’t feel good, when they hit you in the ribs and you have three 240 [pound] men on top of you and you can’t breathe. Then they hit you in the ribs. That doesn’t feel good. But I can easily go to sleep tonight and say to my kids I have nothing to be ashamed of.”

Pedro says Pete Rose should be in the Hall Of Fame

“I’m not condoning doing what he did. But he’s already paid the price.”

On the infamous Don Zimmer incident

“Karim Garcia is the ninth place hitter. I’m pitching on three days rest. I pitched the last game in Oakland and we’re facing the Yankees. It’s critical that I face them. I’m tired. I’m sore. It was really difficult for me. I wasn’t sharp. So think about it. You think I want to hit Karim Garcia? Now that we have time to reflect on it. Is that the guy I want to hit to get bases loaded and nobody out? Think about it. Just give me your honest opinion.”

“I slide-stepped to try to disrupt his timing…it was cold, so I yanked the ball. I wanted to to get it in, though, but it went a little bit too far. And I’m not expecting anything big to happen. I get a ground-ball from [Alfonso] Soriano. The bases are loaded, the run scored, the game is tied, and Karim wants to kill the second baseman. What do you think goes through your mind? You got killed because I needed to hit you? Come on, now! To load the bases?”

“So I just went and said you know what, you shouldn’t do that. So I chased him from second to third, and I kept saying in Spanish, ‘that’s a dirty play. You shouldn’t do that.’ Don’t you see the situation? I’m trying to teach Karim that lesson. And then I had that famous interview, ‘who is Karim Garcia?’ I’m trying to teach Karim that that’s not the situation where I want to hit you. You don’t need to go kill my second baseman. And then Posada pops up. And now hell breaks loose. Because Posada starts pointing down here [to the groin area] and saying bad words, and cursing my mother. That, I did not appreciate. We keep moms away from this. Moms drive us around in the vans. And for us culturally, it’s really sensitive.”

“I said to Posada, ‘I can’t believe you said that. Just remember that.’ Because I said don’t do that. Just like other places are sensitive about different things, in Latin America we’re sensitive about those things…I don’t know why he said that, I don’t have anything with Posada. And then I go, I finish the inning, I get back to the dugout, I go to the restroom and I hear this loud noise. Manny [Ramirez] gets a ball that’s not even close. But Manny, because of the situation, kind of went. He wasn’t going to fight either, because Manny is not a fighter. He’s a joker. And all of a sudden, I’m sitting close to the dugout because I’m waiting to come in because I was in the restroom.”

“There I am standing, not expecting anything to happen, nothing is going on, and then Zimmer came all the way around. And he also mentioned my mom in a bad way. And my intentions were to hold him, but once he throws a jab, you have to protect yourself. And then not only that, but if you watch the video, and I suggest you guys do that sometime, watch me say ‘what? What?’ a second time. And that’s when he comes over and he was running, and not only said what he said, which included my mom, and he tried to jab me, so I had to move to the side because he was rushing and he hit the ground. It’s the only thing I regret my entire career. The only thing I would like to erase.”