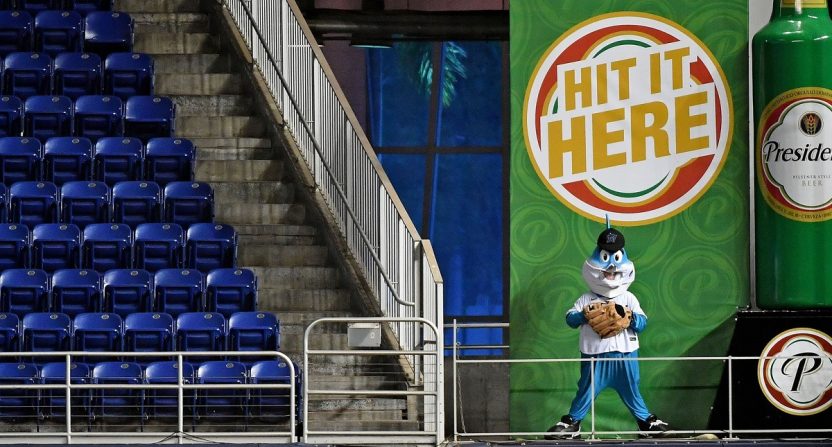 With just a week to go before MLB Opening Day, the Miami Marlins agreed to a broadcast deal with Bally Sports Florida.

The rebranded Fox Sports RSN will produce and broadcast every regular season Marlins game in 2021, the first year of a multiyear agreement between both parties.

It was always likely to get done; the Marlins didn’t have any other real options, and the RSN needed the content, so both parties were motivated. The team always has more leverage, though, and the Marlins are reportedly increasing their revenue fairly substantially, according to the Miami Herald’s Craig Mish:

Via the network’s release, which also has details on the broadcast crew and various studio analysts:

The new season on Bally Sports Florida also marks the beginning of a new multi-year media rights agreement for the network to continue as the home of the Marlins, extending their existing 20-year relationship.

Bally Sports Florida will also produce pre- and post-game shoulder programming as part of the deal. Mish also raises the specter of a potential relocation for Florida’s other baseball team, which could potentially impact the value of Marlins rights in the future:

Also worth noting what the Marlins TV deal could look like if they end up in a few years being the only MLB team in Florida. That shouldn't get lost here. If the Rays (hopefully not) are relocated in a few years, one would assume the value of Marlins media rights would rise.

That’s certainly a factor to be considered. It’s certainly debatable whether a potential Rays move would mean more actual Marlins fans or any raised interest in the team across the state. But in that scenario the Marlins would would at least be able to claim an expanded exclusive territory, and that does have value.

The Marlins open their season on Bally Sports Florida against the aforementioned Rays on April 1st at 4:10 PM Eastern.