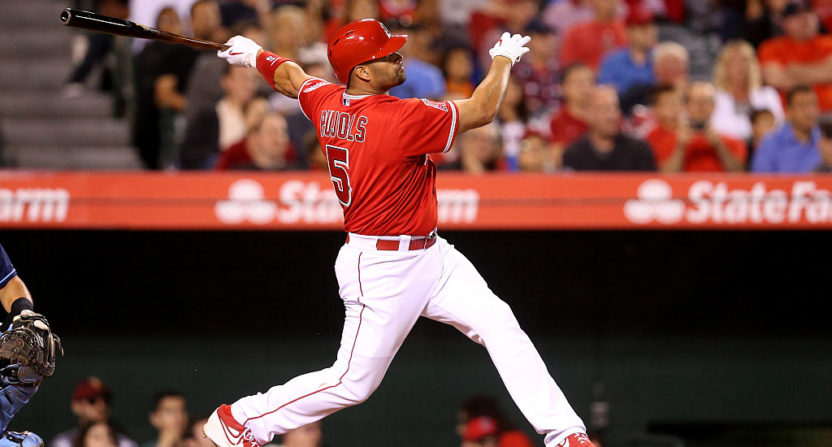 From 2001 to 2011, Albert Pujols was one of the greatest hitters baseball has ever seen. Pujols burst onto the MLB scene with 37 homers and a 1.013 OPS as a rookie in 2001. Even with that insane production, people were skeptical he could keep it up. He had never landed on any top-40 prospect lists, and here he was quickly becoming as good of a hitter as anyone in the league (well, behind Barry Bonds, Sammy Sosa, and Luis Gonzalez in that absurd 2001).

Those were his years with the St. Louis Cardinals.

On December 8, 2011, Pujols signed a 10-year, $240 million deal with the Los Angeles Angels of Anaheim. The deal has gone quite poorly (and should only get worse), with Pujols putting together only one 4-WAR season (2012) and becoming a one-dimensional player due to injuries and age. That one talent the 37-year-old still has left is power, as he blasted 40 homers in 2015 and 31 homers in 2016.

Speaking of those home runs he’s still hitting, did you know that Pujols now has 598 career home runs?

I sure as heck didn’t, and I watch baseball or read about it for a pathetic amount of hours daily. I only found out by surfing through MLB.com’s video highlights and stumbling across Pujols hitting No. 598 on Monday night against the Atlanta Braves:

Two to go! @PujolsFive moves closer to history with career HR No. 598! pic.twitter.com/oIzdznM5j5

And it seems very few people or outlets care.

Now, Monday had a couple of massive MLB stories, with Bryce Harper and Hunter Strickland beating each other up, and Mike Trout needing surgery for a torn thumb ligament that will keep him out six to eight weeks (so Pujols wasn’t even the main story involving his own team yesterday).

But I was still pretty surprised to look around sites and see so little on Pujols approaching 600 homers. Like, it’s out there. If you Twitter search it, you’ll find some stuff. I turned on SportsCenter and they did cover it, but about 45 minutes into the show:

But it was nowhere to be found on MLB.com’s front page last night:

So you get the point. It’s like this everywhere.

My point with this post is to not criticize the lack of coverage or interest (again, I didn’t even know about it). I mean, it is a bit ridiculous that we spend much more time talking about things like Tim Tebow in A-ball, but we here at The Comeback and Awful Announcing are as guilty as any outlets of doing that, because it really does interest people (for some reason).

But why don’t we really care about Pujols approaching 600 homers? That’s the question I’ve been asking myself for a few hours now, and the reason I wrote this post.

And that question only led me to asking myself many more questions!

** Did we already experience so much with the home run races in the late 90s and early 2000s —  Bonds, Sosa, McGwire, etc — that it’s just not all that interesting to us anymore?

** Did already seeing five players in recent history — Bonds, Griffey Jr., Sosa, Thome, and A-Rod — hit 600 homers make the accomplishment seem less incredible to us? And three of those players were of course linked to steroids, which leads to the next question…

** Are we left doubting the legitimacy of home run accomplishments from all players that were in the league at the peak of the steroid era?

** Is it that not too many people care about the Angels and the Anaheim market?

** And does Mike Trout being on the Angels make Pujols seem invisible?

** Does Pujols no longer being a star make it far less interesting?

** Would this be a much bigger story had Pujols stayed with the Cardinals?

** Are Angels fans angry about how disappointing Pujols has been and even they can’t really get into it?

Well, I certainly don’t have the answer, but I’m guessing it’s a lot of these things.

And I’m curious what you think (perhaps you have a reason I didn’t think of, or maybe you really do care), so let us know in the comments.