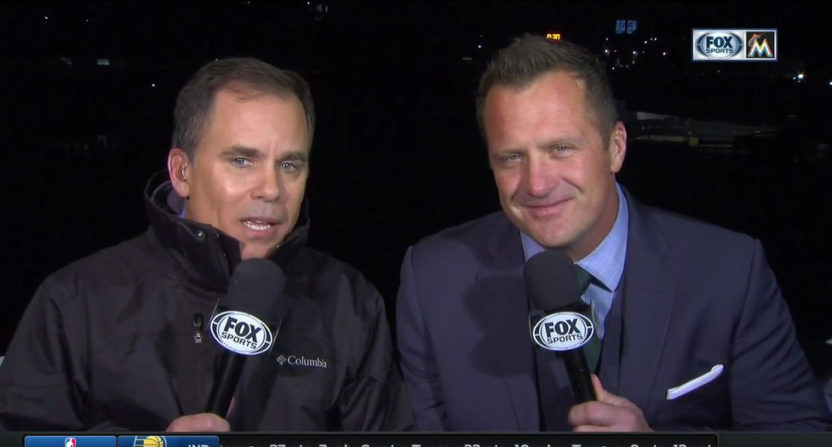 Many local MLB announcers are beloved, especially those who have been with the team for some time, and it’s rare to see someone unceremoniously dismissed after over a decade calling games for a team. It looks like that’s happened in Miami, though, and that’s made a lot of people upset. As per Barry Jackson of The Miami Herald, the Marlins and Fox Sports Florida have parted ways with play-by-play broadcaster Rich Waltz (seen at left above alongside analyst Todd Hollandsworth), as well as pre-game/post-game studio analysts Jeff Conine and Preston Wilson:

A key question is if this is part of the larger Marlins’ housecleaning under Derek Jeter and the rest of the new ownership group. Jackson’s Herald piece on the move says Fox Sports Florida claims they made the decision themselves, but many are wondering if Jeter played a role here:

Fox Sports insisted on the record that decisions on these dismissals were made entirely by Fox, not by the Marlins.

But several people close to the situation were highly skeptical of that, noting that Fox loved Waltz all the way until the time Derek Jeter bought the team. A source very close to Conine said Jeter did not want Conine to remain with the broadcast crew.

Waltz declined to answer when asked if he believes this decision was made by the new owners.

“I am disappointed but wish the Marlins and their fans and Fox Sports Florida the best,” Waltz said. “I enjoyed every one of my 13 seasons every inning of every game. I was blessed to work with great production people and terrific analysts. I am very proud of the charity event I starteed and helped run and hope it continues.”

The announcers were informed of the decision this week.

“After a thorough review of our Marlins telecasts, we have decided to make changes with the broadcast talent for the coming season,” Fox said in a statement. “We feel that this is the right time to make a change, and we’ve shared our decision with the team. We thank Rich, Jeff and Preston for the hard work and dedication they brought to the broadcast and wish them the very best.”

This is the third straight year that there have been major changes made to the Marlins’ TV broadcasts, as they axed regular analyst Tommy Hutton after the 2014 season, used rotating analysts (including Wilson) in 2015, and hired Hollandsworth as a full-time TV analyst last year. Hollandsworth is reportedly staying on, but it’s unclear who his play-by-play partner will be: Jackson’s piece notes that “Fox is in the early stages of finding a new TV voice.” Other parts of the TV broadcast are staying consistent, though, as Jessica Blaylock will return as the broadcast’s reporter and Craig Minervini will continue as the studio host.

The move to get rid of Waltz is drawing particular backlash, as he’d been broadcasting the team’s games locally for the past 13 years (in addition to national baseball work with Fox, ESPN and ESPN Radio and other work over the years with ESPN, Raycom and CBS Sports Network) and had received plenty of praise inside and outside of the media world. This drew a lot of criticism, including from ESPN’s Boog Sciambi (who worked on the radio side of Marlins’ broadcasts from 1997 to 2004).

Derek Jeter is about 0 for 10 with the Marlins so far in decision making, the latest being @RichWaltz. Better start asking people with some experience in that market—I️ ain’t offering—or it’s gonna be a disaster.

Many others weighed in as well:

I'm more upset about @RichWaltz than I am about any Stanton trade.

Marlins telecasts won't be the same and I will genuinely miss his calls. https://t.co/fwfTMGuopI

NOT COOL AT ALL. @RichWaltz is the voice of all my @Marlins memories. He's one of the best in the business and one of the most underrated out there!!
???? https://t.co/1CHnJpOm83

huge mistake by @FOXMarlins , @RichWaltz is one of the best in the business, he will dearly missed by Marlins fans https://t.co/vDMQP7Mk1Q

Rich Waltz is one of the main reasons why I watched Marlins games. I’m #DONE with the Marlins. https://t.co/fYAPQdIbl7

Feel awful for @RichWaltz. An incredible professional. Many seasons made the #Marlins tolerable to watch. Very, very disturbing and distressing to see him let go.

Really disappointed to hear about changes in Marlins booth. @RichWaltz is what PBP man should be. Fun, insightful, yet never making it about himself. Always enjoyed his broadcasts, no matter who his partner was.

.@RichWaltz is one of the best in our business hands down. Marlins fans know this. Hate hearing this news but a lucky fan base will benefit from Miami’s loss at some point soon.

Loved listening Rich Waltz, great announcer, he has such a passion for the game. Hope he finds somewhere else to be a play-by-play https://t.co/UrVL8qtMfy

#Marlins I realize that tough decisions need to be made on the field but to come in and essentially show the door to McKeon, Conine, Dawson and Perez and now flush out a dedicated guy like Rich Waltz.. that's blatant disregard for the history of the Marlins organization

Shame on Fox Sports Florida. Two years ago, they fired Tommy Hutton the day before Thanksgiving and they did the same thing now with the firing today of @RichWaltz, Jeff Conine and @PrestonWilson44. What would have been the harm in waiting until after the holiday? #Heartless

Rich Waltz was a prince! This bum kicks him to the curb Thanksgiving week!?!?!?! pic.twitter.com/lFM3E9WAee

And some are even wondering if this will lead to Jeter bringing in old Yankees’ teammates:

So, yeah, these moves aren’t going over well. And we can add that to many of the other moves Jeter has made since taking over the team; while Fox Sports Florida insists this was their own call, it certainly seems likely the new Marlins’ owners were at least part of the reason for these changes. We’ll see where things go from here, but there are a lot of Marlins’ fans upset with Jeter’s tenure so far, and this is just the latest reason why.