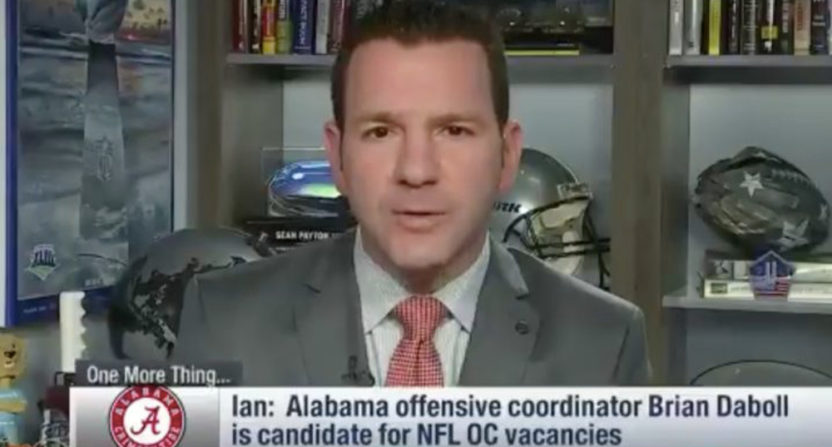 The Tennessee Titans and head coach Mike Mularkey “mutually agreed to part ways” Monday, which prompted plenty of criticism of NFL Network’s Ian Rapoport for reporting Sunday that the Titans had offered Mularkey an extension and “he’s staying.”

Some of the harshest criticism came from Rand Getlin, a NFL reporter/columnist for Yahoo from 2010-May 2015 who then worked with Rapoport at NFL Network/NFL Media from July 2015 through August 2016, when he and the network “mutually agreed to part ways” (Getlin blasted John Ourand for initially reporting that it was a NFLN decision).

Here’s what Getlin had to say about Rapoport Monday:

How can a reporter be so wrong, so often, and still keep their job? Honest question.

Literally dozens of examples of being spectacularly wrong, and still gets promoted by his network like he's the ? lol.

And let's not pretend like there aren't receipts floating all over the innernets … like, this is not a shocking miss. Dude misses literally all the time lol

For real, @Rapsheet, just out of curiosity, how does this happen so often? Help us understand.

It’s certainly true that Rapoport’s reporting has been disputed before, perhaps most notably by ESPN’s Louis Riddick last year when Riddick called Rapoport “deadass wrong” for saying the Kansas City Chiefs had reached out to Riddick to set up an interview for their GM position. And Rapoport’s reporting has taken criticism elsewhere, including for reports about the Redskins last fall and for overstating an injury to Drew Brees in 2015.

Rapoport has been right about a lot of transactions, too, though, and does break some news. And as Pro Football Talk’s Michael David Smith noted, Getlin’s own reporting record isn’t perfect:

Rand Getlin is criticizing Ian Rapoport for supposedly being wrong about something. I only know that because someone I follow retweeted Rand's tweet. I can't see Rand's tweets directly because Rand blocked me when I pointed out something he was wrong about. pic.twitter.com/c0kOBc1n0C

One of the biggest challenges when it comes to breaking news on fluid situations is being careful with your language, and that appears to be what tripped Rapoport up here. His reporting that the Titans offered Mularkey an extension has been confirmed by the team, so it’s the “he’s staying” that’s the inaccurate part. It’s understandable why Rapoport presumed that, especially as Mularkey seemed unlikely to get a head coaching job elsewhere if he did leave, but it wasn’t correct.

However, this does seem like a situation that changed dramatically over the last 24 hours, and it may have been about Mularkey’s unwillingness to make staff changes, as Rapoport’s further tweets Monday suggest:

The #Titans announce they have fired coach Mike Mularkey. Unreal.

#Titans GM Jon Robinson and CEO Steve Underwood told coach Mike Mularkey before the game and told him they were extended him and he was their guy. They said they'd get it done after the game. Now this.

The #Titans planned to fire Mike Mularkey after Week 17. Then after the playoff loss that never came. It was all about Josh McDaniels. Now, the #Colts and the #Titans may battle it out for him.

The #Titans did offer him an extension… then fire him. Likely this was about not bringing in a new OC. https://t.co/VkNN81BJ5H

#Titans GM Jon Robinson says staff changes was “certainly something that was discussed” about Mularkey’s dismissal. As in, Mularkey did not want to make them. Mularkey’s words did affect matters, Robinson said.

So, does the “he’s staying” tweet deserve some criticism? Sure. And maybe there’s even some value to a wider look at times Rapoport has been wrong; Riddick would certainly agree. But it’s not particularly clear (at least at the moment) that Rapoport is wrong substantially more than others who put out anywhere near his volume of transactional reports, and that makes the vitriol from Getlin here interesting. We’ll see if there are any further developments on this front.