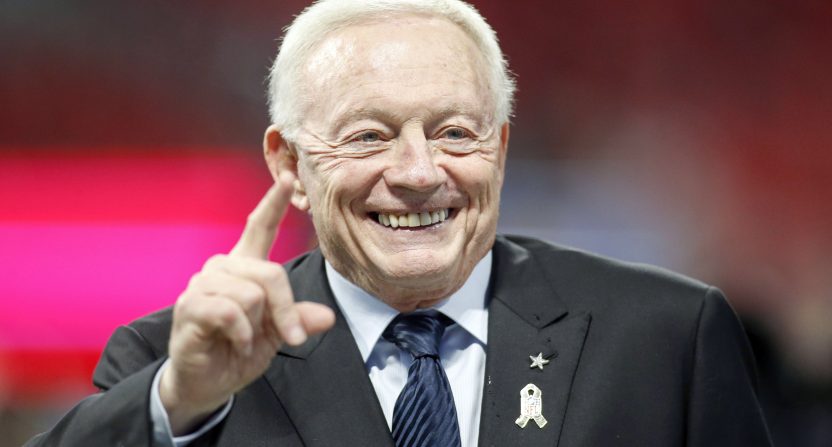 The national anthem has been a hot button issue with the NFL for the past two seasons and that’s not ending anytime soon. Dallas Cowboys owner Jerry Jones has declared that all members of the team must stand for the anthem, contrary to current NFL policy which allows players to choose either to stay in the locker room or be on the field during the anthem.

Dallas sports anchor Mike Doocy normally has an annual interview with Jones at Cowboys training camp, but just before he was about to do so on Sunday night, Cowboys officials told him that Jones would not answer questions about the national anthem. And because of that restriction, Doocy decided to cancel the interview.

According to the Fort Worth Star-Telegram, the National Football League had ordered Jones not to talk about the national anthem and thus, he informed several stations which had booked interviews with him that he would not talk about it.

Doocy explained why he couldn’t go on with Jones:

“… tonight at the last second before we were getting ready to record our interview, we were told by Jerry and his public relations staff that the national anthem issue would be off limits. The fact we were told that at the last minute and that conditions were put on the interview in that way, I just didn’t feel comfortable going on with it.

“In some ways I’m violating my own policy here. I’ve always felt its better even if there are conditions put on an interview to talk to the newsmaker and get some information out of them that would be of value to our viewers and audience. If I’ve let you down in this regard, I do apologize. I just couldn’t accept the way it happened at this particular case tonight. Hopefully we’ll have a chance to talk to Jerry in the future.”

Jones did appear on other Dallas stations on Sunday and did not broach the anthem issue.