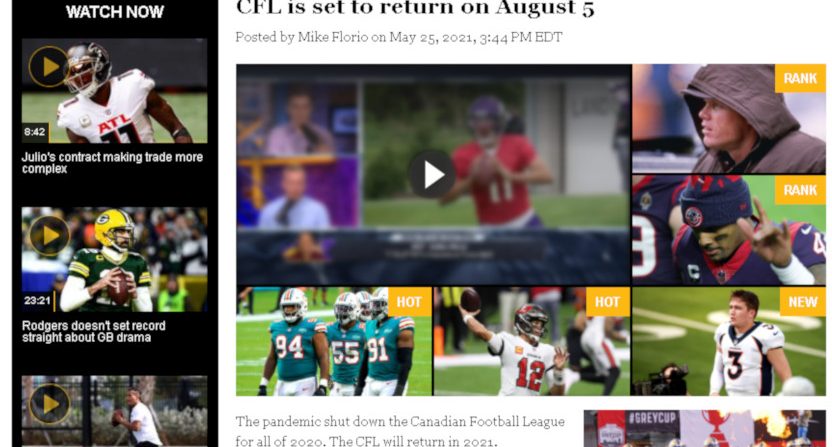 After the CFL became one of the few North American sports leagues to actually fully cancel its 2020 season last August amidst the COVID-19 pandemic, there’s been a lot of speculation about what’s next for the league. That’s included February claims from the United Football Players Association (a new group looking to represent both CFL and XFL players amidst XFL talks, but not the CFLPA, which actually currently represents CFL players) that the CFL would cancel both its 2021 and 2022 seasons and fully merge with the XFL, April plans from the league for an August 5 start (pending a whole lot of federal and provincial health approvals), and now, some very authoritative-seeming verbiage from Mike Florio of Pro Football Talk that the league will actually start on August 5 and has notified agents and players of a July 10 start to training camp:

Here’s more from that piece:

The pandemic shut down the Canadian Football League for all of 2020. The CFL will return in 2021.

The CFL has informed players and agents that the new season will begin on August 5.

Training camp will open on July 10, after a quarantine that commences on July 2. Camp ends on July 31.

That all seems very matter-of-fact, but if this was accurate, it would be quite the news. Yes, the CFL’s been targeting an August 5 start date since April, but that’s been highly up in the air thanks to COVID-19 issues in Canada. The league’s return to play plans have not yet been approved by all relevant provincial health authorities, and that’s a notable problem.

And there are a lot of questions about when games with significant numbers of fans may be possible. That’s especially true considering that many Canadians still only have one vaccine shot. And many provincial health reopening plans (like B.C.’s, released Tuesday) don’t envision large numbers of spectators being permitted (even outdoors) until at least September. The B.C. plan didn’t specifically address the Lions, the province’s CFL franchise, but when asked about that, premier John Horgan said it would depend on other provinces, and said “If we can push (the season) later into August I think we’ll be in a much better place.”

And the CFL said last year that playing without fans isn’t worth it for them. So if we take them at their word, an August 5 date doesn’t currently seem terribly viable in all provinces. Certainly, the league could start with only games in provinces with looser restrictions and then change as they go (and it’s worth noting that many health deadlines in the past have also been moved, so those September dates aren’t necessarily firm either), but at the moment, there doesn’t seem to be a pathway for them to definitively announce a July 10 training camp start and an August 5 regular season start. And many CFL reporters and agents noted that on Twitter:

There is no change in status of the 2021 @CFL season. Still dependant on approval from public health authorities for return-to-play and fans-in-stands. Decision on Aug 5th season start expected around mid-June. https://t.co/2EDr22e7fr

I’ve reached out to a number of high-profile #CFL agents regarding these dates. This is news to all of them.

As of now, the league has not informed agents of any dates for training camp. https://t.co/LGsbwaUkmL

Agents have not been told anything… coming from an agent. This is merely what WOULD happen IF the CFL is given go ahead… and we've known this for a couple of months now. https://t.co/IIwdxXwLJe

Here are more specifics from Hodge’s 3DownNation writeup of this:

A report from Pro Football Talk indicated that CFL players and agents had been informed that training camps would open on July 10 following an eight-day quarantine.

Several high-profile CFL agents have indicated to 3DownNation that no such correspondence took place.

The league has not provided players or agents with any formal updates regarding training camp since the new league targeted start date of August 5 was announced in late April.

The CFL has yet to release a new schedule since announcing that the season would be shortened from 18 to 14 games due to the ongoing COVID-19 pandemic. The league is reportedly drafting schedules with no games in B.C. or Ontario for the month of August as it awaits approval from health authorities in both provinces.

It’s unclear what exactly happened here. Perhaps the Pro Football Talk piece was only intended to reference the CFL’s previous statements about planned dates, but if so, doing so a month after that announcement (and when that announcement seems pretty in doubt) is odd, and the language in the PFT piece certainly makes it sound like a new report. And yes, there is a possibility that’s accurate as a new report; PFT has broken a lot of stories over the years (although many more on the NFL front than the CFL front), and there have been lots of cases of CFL league personnel, team personnel, and agents leaking particular stories to U.S. outlets rather than the Canadian media outlets who regularly cover them.

And it’s possible that the CFL may well be able to pull off an Aug. 5 start after all, whether that’s with early games concentrated in permissive provinces or with this summer going better than expected for other provinces. And if an Aug. 5 start does happen despite the hurdles, this report won’t look too bad in retrospect, even if the specifics on how many CFL players and agents were informed right now may still be incorrect.

But at the moment, this report appears to be an overreach, certainly with its claim that “The CFL has informed players and agents that the new season will begin on August 5.” And given how many Canadians still only have one vaccine shot, and how Canadian vaccinations and case numbers are tracking for the moment, it would seem like a big overreach for the league to declare right now that they’ll be going ahead as planned, especially with multiple provinces not yet signed off on their return-to-play play.

However, a 2021 CFL season does still seem more probable than not at this point. Various CFL owners have been quite clear that they do expect to play this year (interestingly enough, those statements came in response to a 3DownNation report last week that “There is a growing lack of confidence around the #CFL that the league will put football on the field in 2021“), and it absolutely would be devastating for the league to have two cancelled seasons in a row. If there’s a way they can play under health guidelines, they’re going to do it. So we’ll see what happens, and we’ll see what they announce. But for now, the balance of reporting does seem to indicate that the league has not sent any firm updates to all agents and players on a July 10 training camp start and an August 5 season start.