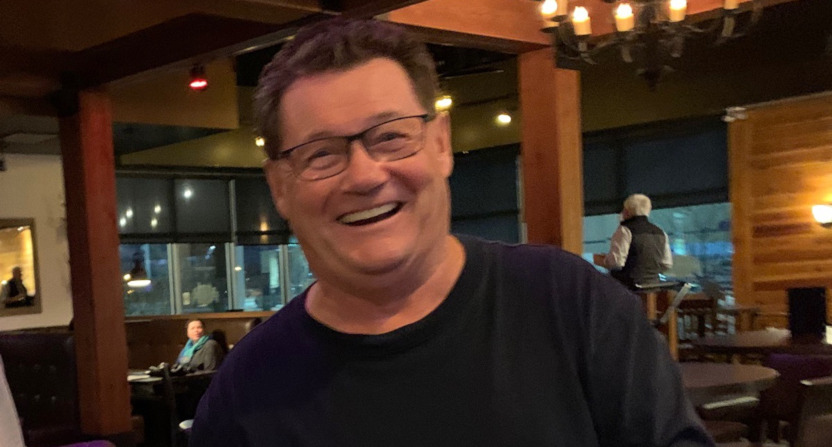 For the last several decades, Warren “Woodsy” Woods has been a prominent figure on the media scene in Saskatchewan, Canada. Woods was an initial anchor for STV (now Global Regina) when they went on the air in 1987, and covered the CFL’s Saskatchewan Roughriders, the provincial curling scene (he was inducted into the Curlsask Hall of Fame in 2014), and countless other sports there through 2013, then moved to Regina radio station CJME that year. But Woods wound up in a tough fight with COVID-19 in December, and while he’s made some progress since, he’s still hospitalized, and there’s a difficult road ahead for him with medical care and physical therapy. That led to the launching of a GoFundMe for him on Tuesday, which had raised more than $34,000 of its $50,000 (Canadian) goal by 9 p.m. Eastern Thursday. And as Rob Vanstone wrote in The Regina Leader-Post, that page (led by Tim Rogers) even involves famed former Roughriders like receiver Ray Elgaard, who spoke about his respect for Woods:

“My personal interactions with Warren have spanned almost four decades — two as a reporter/player and the remainder as just two guys,” says Elgaard, a Canadian Football Hall of Fame slotback who played for the Roughriders from 1983 to 1996.

“In that time, I can’t recall a single instance where he even remotely gave the impression that he cared about anything other than truth, fairness, and mutual respect of others — qualities that I demand in my friends, and which are in drastically short supply in today’s world … qualities that I would use to describe ‘the real measure of a man.’

…“He was in our living rooms for decades and on the radio in the morning,” Rogers says. “He has the kind of charisma where he’s everybody’s buddy. If you know him, he’s the same guy in person as he is on radio and TV.”

Here’s more from the GoFundMe page:

As some of you may know, our good friend Warren Woods — Woodsy — contracted COVID-19 in early December. He has been battling the virus and its effects at Regina’s General Hospital ever since.

Woodsy has a long and difficult road ahead. He will face ups and downs, but he is a tough old boot. We are creating this Go Fund Me to help Woodsy with his medical needs and help him focus on the the physical therapy he will require over the next year.

And we want to ensure he gets there with your support.

Woodsy won’t likely be fit for microphone service just yet. He’ll have to stick to watching sport for a while rather than talking about it. To that end, we want to make sure he has as much financial support as he can for as long as he needs it.

And here are a few of the tweets in support of Woods from colleagues, friends, and fans:

Many have been asking me about @WoodsyCJME. Well, if you grew up watching him on Sportsline or shared a drink with him at the Patch or also support his Leafs, he and his family could use some help.https://t.co/VYQ9M1aTRI

Everybody's good buddy Warren Woods has been battling COVID-19 since December and he could use our help. A Go Fund Me page has been set up with that in mind. Here's a link to our story https://t.co/tPBgAlywTn #covidsucks. @WoodsyCJME

He gets by with a little help from his friends… ❤️ @WoodsyCJME https://t.co/zOV4s6Pu25

Warren Woods, my co-worker of the last 7 years, has been in hospital battling COVID for a month. His close friends/family have started a fundraiser. https://t.co/RPLuAIf0rb

Our good friend Warren Woods has
been hit hard by COVID and has along road of rehab ahead of him. He has been a fixture in the Regina sports scene for close to 40 years. Please help if you can!
https://t.co/1KacDsmhTb

For those of us who have spent time on the Canadian media scene, “Woodsy” has long been a familiar figure, and a key voice of sports in Saskatchewan. It’s awful to hear about the challenges he’s facing. But it’s also refreshing to see the support for him from athletes, media figures, and friends, and to see the people who have lined up to give what they can to help him out. We wish him all the best in his recovery.