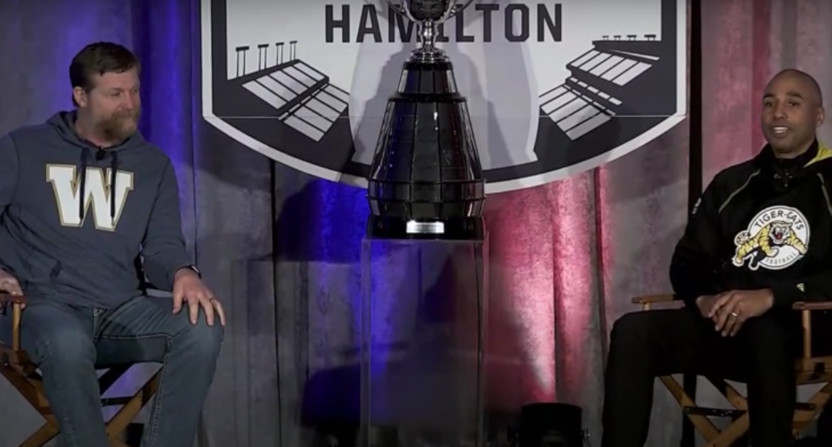 Each Grey Cup Week features an opening press conference with the head coaches of both teams, and for the last several decades, that has usually featured them being asked about what their policy is on players having pre-game sex. This question started with famed Canadian sportswriter Jim “Shaky” Hunt, who attended the Grey Cup every year from 1949-99, and who posed this question at numerous Grey Cups in the last decades of his career as a way to lighten up the room and get some funny answers from coaches. (And there have been a lot of those over the years.)

Hunt covered his last Grey Cup in 1999 and passed away in 2006, but Terry Jones of The Edmonton Sun took over “The Jim ‘Shaky’ Hunt Memorial Question” from 1999 on, and has carried on the tradition for the last couple decades (sometimes with some awkward phrasings). That’s been a delight, as it makes a funny story every year, and it helps show off the quirky and fun side of the CFL; as Jones wrote in 2018, “I’ve covered more than 20 Super Bowls and I guarantee you, you’d never get the response to the question like we get at the Grey Cup.” And this year’s responses ahead of Sunday’s 108th Grey Cup, from Winnipeg Blue Bombers head coach Mike O’Shea (seen at left above) and Hamilton Tiger-Cats head coach Orlondo Steinauer (seen at right above), both who were also in those roles when these teams faced each other in the last Grey Cup in 2019, were pretty good. The question and the responses can be seen at 1:07:00 of the video below:

Jones outlines the question’s history, then asks “What are your philosophies going into this Grey Cup, especially with everything that surrounds it, on your players engaging in sex before the football game?” He asks Steinauer first, and Steinaeur says sarcastically “Thank you, because I got hammered last year.” He then says “I’m sorry, I don’t have anything creative, but I’ve always just said ‘You’ve got to do what’s got you here.’ And with that, I’ll turn it over to Osh [O’Shea].”

O’Shea says “Yeah, I went through and tried to come up with something. But the interesting point you brought up is that this year is really different. The way the protocols work, and the respect a teammate has to have for his other teammates, in order to make sure that their health and welfare is looked after, it’s paramount. I think the COVID protocols have taken care of any answer that you could conjure up for this year.”

That’s a pretty good answer, and a notable one considering the league’s stringent COVID protocols (which even saw some Argonauts’ players have their East Final status endangered thanks to attending a Toronto Raptors game). But it’s not quite as funny as O’Shea’s last swing at this in pre-pandemic 2019:

Mike O'Shea of the #Bombers gave an answer to the Jim Hunt Memorial question about thoughts on players having sex during Grey Cup week that just brought the house down. pic.twitter.com/vIaZOQU7SS

“It’s been eight years since we climbed into this position [playing in the Grey Cup] and another 29 since we finished the job [winning the Grey Cup], so there’s going to be some nerves. The expectations are very high and the anticipation can sometimes ruin the event. So my advice to the players is ‘Don’t exhaust yourself in the warmup.'”

Hopefully there will be many more Jim “Shaky” Hunt Memorial Questions, and funny responses to them, for years to come.