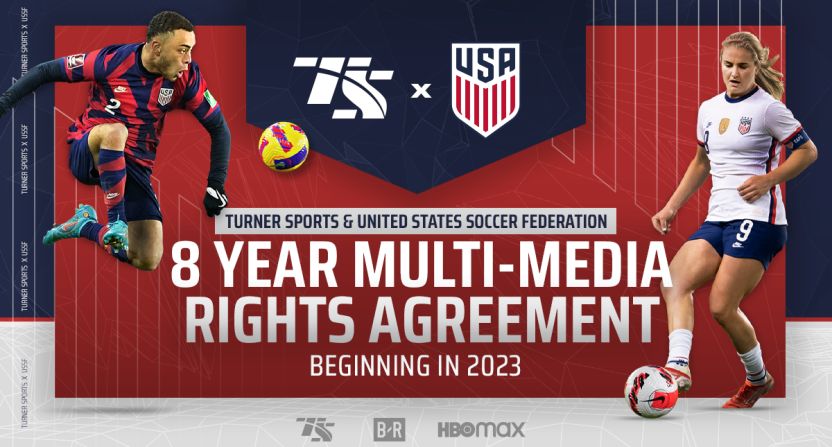 On Jan. 17, HBO Max will show its first-ever live domestic sports coverage, a friendly between the U.S. women’s national soccer team and New Zealand’s women’s team. That’s part of a new eight-year deal between Warner Bros. Discovery and U.S. Soccer, including both USWNT and USMNT matches and coverage on both HBO Max and linear networks like TNT and TBS. On Tuesday, WBD announced their lineup of overall U.S. Soccer commentators, with some of those starting work on the Jan. 17 and Jan. 20 (a rematch) clashes between the USWNT and New Zealand (the 2023 FIFA Women’s World Cup co-hosts) on HBO Max. And there are plenty of prominent names attached, including Luke Wileman (known for play-by-play work for Canada’s TSN), Julie Foudy (known for both her playing career and her analysis for ESPN), and Kyle Martino (known for his work for NBC). Here’s more from a release:

Foudy – One of the world’s preeminent female soccer stars, Foudy helped lead the USWNT to two FIFA World Cup championships and a pair of Olympic gold medals during her remarkable 17-year international career. The former team captain amassed an impressive 271 international caps between 1987 and 2004. The first American to receive the FIFA Fair Play Award, she was inducted into the National Soccer Hall of Fame in 2007. She was a four-time All-American at Stanford. She is currently an analyst with ESPN, and beyond the game she is an author, television producer, podcaster and former president of the Women’s Sports Foundation.

…Martino – One of American soccer’s leading voices, Martino previously served as a studio and game analyst for NBC’s coverage of the English Premier League from 2013-20. As a player, Martino starred across all levels of United States soccer, from being named Gatorade National Player of the Year as a high school senior in 1998, to two-time ACC Player of the Year at the University of Virginia and MLS Rookie of the Year honors in 2002. He also earned eight career international caps before transitioning to broadcasting with ESPN and FOX Sports.

…An award-winning soccer commentator with more than 25 years of experience of calling international soccer, Luke Wileman will serve as TNT and HBO Max’s lead play-by-play voice for U.S. Soccer. A veteran of numerous FIFA World Cups, including this year’s event in Qatar, Wileman has called many of the world’s biggest soccer showcases. He is a two-time Canadian Screen Awards winner for Best Sports Play-By-Play and has been the leading voice of soccer in Canada for more than a dozen years. Wileman began his career with the BBC, including three years as the play-by-play voice of Leeds United.

As mentioned there, former U.S. stars DaMarcus Beasley and Shannon Boxx are also attached as analysts. On the studio side, ESPN and Fox veteran Sara Walsh (who also was a four-year starter for the University of North Florida Ospreys soccer team) will host. And Fox/ESPN/fuboTV veteran Melissa Ortiz (who also played for the Colombian national team) will serve as a reporter. So while this particular coverage is new, the names attached will largely be familiar to U.S. audiences.

The release also says “WBD Sports’ commentator roster will also include other experienced soccer voices – both domestic and international – with various ties to the beautiful game.” So there are more names to come. And further programming and production details are coming soon as well.