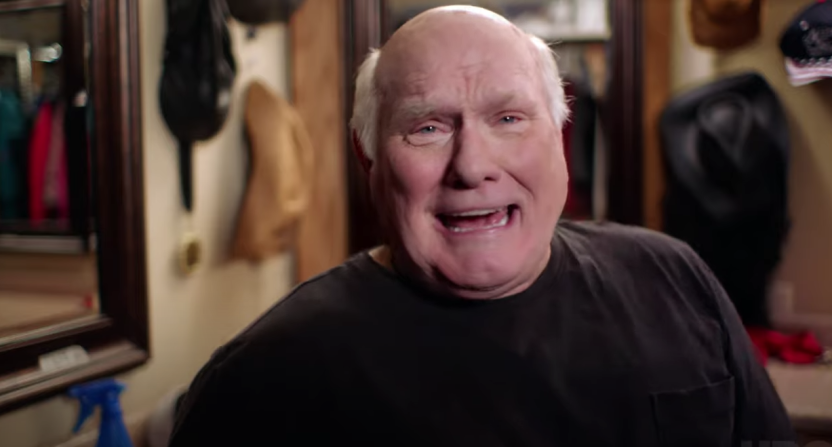 Before Tom Brady, before Joe Montana, Terry Bradshaw was the ultimate football champion.

The first quarterback to win four Super Bowls was synonymous with success at a time when the NFL wasn’t as popular as it is today. Bradshaw transcended his sport in the 1970s and 80s, immediately recognizable even if you never watched a game. His stardom continued to rise long after his playing career ended because of his singing, acting and his job as an NFL studio analyst for Fox.

You would think his achievements brought him sheer joy. But as HBO’s “Terry Bradshaw: Going Deep” reveals, the story is never that simple. The documentary, directed by award-winning filmmaker Keith Cossrow of NFL Films, will debut Tuesday. The biggest takeaway is that Bradshaw seems to have found the best version of himself at the age of 73. Along the path to self-discovery, he has encountered doubt and depression.

The documentary begins, unexpectedly, with Bradshaw on stage in Branson, Missouri. He has what might be described as a variety show during which he sings, does comedy and tells stories. Terry Bradshaw is enjoying “Terry Bradshaw Show” as much as anyone in the audience who paid $50 to see the Hall of Famer at 1,200-seat Clay Cooper Theatre.

“If I could do anything in life, if God said: ‘Terry, I’m going to start you over,’ this is what I’d do,” Bradshaw said.

This is a man comfortable in his own skin. That wasn’t always the case for someone who has been told his entire life that he’s “not normal.” Today, we’re more accepting of people being different, more understanding with more resources to help someone cope and evolve.

HBO’s “Terry Bradshaw: Going Deep” is about a man telling his version of his story. It feels very much like a companion piece to “Terry Bradshaw Show.” Every superhero has an origin tale. Bradshaw is fabulous at speaking about how a small-town kid who didn’t start until his senior year in high school and didn’t start until his junior year in college became the No.1 overall pick in the 1970 draft.

Bradshaw has wonderful anecdotes, including one about his former Louisiana Tech teammate Phil Robertson. Yes, that Phil Robertson of Duck Dynasty fame. We won’t spoil it here but it’s delightful. His recounting of the Immaculate Reception, arguably the most famous play in NFL history, is funny too.

There is also a sense of sadness and regret in this 74-minute film. Bradshaw uses words like “clumsy,” “man-child,” and “immature” to describe his younger self. He wondered: “Why would anybody pick me in the first round? I don’t know why Chuck Noll drafted me.” The documentary makes clear that while Bradshaw’s time with the Steelers was immensely successful it also scarred him.

He finished his rookie year with 8 touchdowns and a league-high 24 interceptions. Bradshaw was so unpopular that he was hung in effigy at his own stadium. The NFL Films footage of this is jarring.

Bradshaw struggled to read coverages. Critics labeled him as “dumb.” That stigma has lingered throughout his life and still bothers him today. Before Super Bowl XIII in Miami, Dallas Cowboys linebacker Thomas “Hollywood” Henderson famously mocked Bradshaw by saying: “couldn’t spell ‘cat’ if you spotted him the ‘c” and the “a.’”

During the documentary you can hear his voice quiver in anger. You’ll also notice how uncomfortable he is talking about Steelers coach Chuck Noll. HBO could have done a 3-hour documentary on the Noll-Bradshaw relationship alone because it’s fascinating. The most successful coach-quarterback union prior to Bill Belichick-Tom Brady was between two guys who didn’t care much for each other.

Sounds like Bradshaw wanted a father figure. Noll simply wanted to be a dictator coach.

Bradshaw described Noll as smart but also called him “a strange bird” and an “asshole.” He said: “I was scared shitless of him.” He added: “I wasn’t his kind of quarterback, and he wasn’t my kind of coach.” Bradshaw elaborated by saying Noll repeatedly screamed at him and embarrassed him.

The relationship between the two never improved. When Noll passed away in 2014, Bradshaw didn’t attend the funeral, prompting criticism.

Bradshaw defends himself. But it’s here where “Going Deep” doesn’t go deep enough. The documentary tells only Bradshaw’s point of view. There are no current interviews with former teammates, close friends, not even family members. (You do see his wife, but she’s not there to answer questions). It would have been nice to hear what others had to say about Noll and Bradshaw.

The other moving part of “Going Deep” is when he talks about his three failed marriages and his depression. Bradshaw is open and vulnerable. He acknowledged that his mental health issues contributed to his unhappiness and he “went to therapy for a long time.” Here is another lost opportunity. It would have strengthened the documentary to have a behavioral health expert on camera to address depression.

But “Going Deep” is Bradshaw’s story. Perhaps he didn’t want any other voices. The documentary ends on an inspirational note. He has a satisfying career and a satisfying life. He has been married to his wife Tammy since 2014. He seems happy.