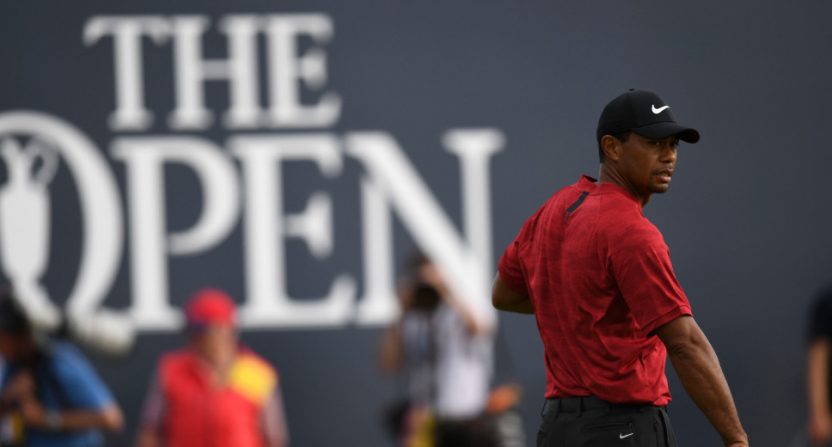 Tiger Woods continues to be critical to golf ratings. While Francesco Molinari came away with the Open Championship (otherwise known as the British Open, but not to the official broadcaster) title Sunday, Woods led late and eventually finished tied for sixth, sparking plenty of pieces about how he’s actually back this time. And having him in contention also sparked a whole lot of viewing interest, as the overnight ratings showed:

VIEWERSHIP: @NBCSports Ties Best Final Round Overnight Rating in 18 Years at @TheOpen – Dates Back to @TigerWoods' Career Grand Slam Win in 2000 at the Old Course and Ties His Win in 2006 at Royal Liverpool. @RandA @GolfChannel @carnoustiegolf pic.twitter.com/Gxp0l78FNx

A 38 percent year-over-year bump is impressive enough in its own right, especially as many sports properties have been trending down lately. But it’s particularly notable that this tied for the best final round overnight for this tournament since 2000, and that the event it tied with was in 2006. And Woods played a crucial role in all three of those tournaments, so that further helps to show his impact on the ratings.

It’s also interesting that this was the best non-Masters major since the PGA Championship in August 2015; Woods missed the cut in that event, underwent back surgery the next month, and then missed the entire 2016 and 2017 seasons (except for the Hero World Challenge in December 2016 and the Farmers Insurance Open in January 2017) thanks to recovery and further surgery. So his first major since that 2015 PGA Championship was this year’s Masters (where he finished tied for 32nd), and his second was the U.S. Open (where he missed the cut). And those 2016 and 2017 majors without him didn’t perform as well.

And even in 2015, Woods only finished tied for 17th at the Masters and missed the cut at the other three majors. This is the first time he’s finished in the Top 10 since the Open Championship in 2013, where he finished tied for sixth. So it’s not too shocking that a remarkable showing from him, the kind of performance from him that hadn’t been seen in at least five years, led to some impressive ratings. But given that ratings impact, golf broadcasters will definitely be hoping that this tournament is a sign of more to come from Tiger rather than just a one-off.