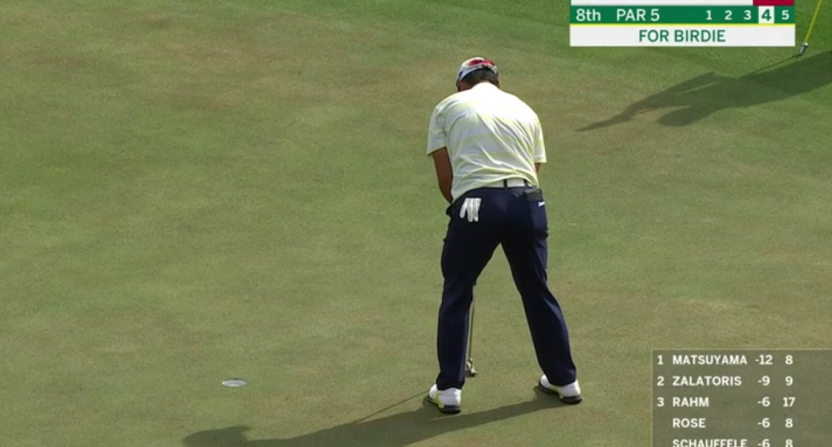 Sunday at the Masters is typically one of the more interesting sports days of the year, and it’s absolutely the biggest day for golf.

Today’s final round hasn’t really been in doubt; aside from a flurry of leaderboard movement in the first hour of the CBS broadcast, Hideki Matsuyama has been in full command, taking a five-shot lead to the back nine.

Without much drama on the course, it’s been easier to pick up on a few broadcast quirks. One of the new features this year, for example: a constant, mostly transparent leaderboard in the bottom right of the frame. That was introduced by Fox during their short-lived U.S. Open work, and it’s great, and it should be a regular thing for all golf coverage.

It also exposed a bit of the sausage being made today at one point. With Matsuyama lining up a birdie putt on the eighth green, the card on the top right noted he was -11 and putting for birdie. The leaderboard on the bottom, though, revealed he’d already converted the bird.

CBS scooped by their own leaderboard, tough scene pic.twitter.com/8i1gEYLOUq

Obviously the broadcast was showing that Hideki putt on delay if their own scoreboard had time to update.

It’s not always just a matter of seconds, either. Yesterday, Twitter lit up once they realized Jordan Spieth had escaped from the trees to within very close range (coincidentally also on the eighth hole.) The result of the shot was available on the Masters.com/app leaderboard:

It was also visible on one of the many Masters streams, in this case the featured groups option. Viewers of that stream saw it as close to live as technology allows.

Viewers watching the main CBS broadcast, though, were watching Jim Nantz and Nick Faldo chat for a bit.

They missed the shot of the day because they needed to show Butler Cabin pic.twitter.com/gUj1Iwweeg

Then, when CBS did eventually show it, Ian Baker-Finch called the shot as though it was live:

How in the world did Jordan Spieth pull off this shot from the pine straw? pic.twitter.com/jjIfsa8njw

This isn’t a new thing, of course. Golf as a sport isn’t easy to broadcast (as any producer or network executive will rush to say as soon as anyone critiques their approach), and not all the shots line up neatly in chronological order, allowing producers to throw it around the course without missing a beat. The last few years, networks have revived split-screen options for simultaneous live moments, which has helped.

They’ve also adopted split-screen for commercial breaks, theoretically increasing shots shown live or close to live, while reducing the need to go back after ad breaks to catch up viewers. (It’s debatable whether that’s helped. It often feels like it’s an excuse to justify a larger commercial load, meaning we get a lot less full-screen golf.)

Even so, there are always some fairly egregious examples of “live” golf being actually very much not live. It was never really apparent until, ironically, the Masters started offering extra channels of coverage in the late ’00s. I remember watching featured groups or Amen Corner options on DirecTV, which also offered the four-way mix channel that included the traditional broadcast. Watching then, it was easy to spot just how long it took in real-time for the network to show something happening that had in fact already happened; that it would still be presented as “live” was pretty surprising, considering how often they also said “This just a moment ago…” for certain shots.

Now, though, with app leaderboards and ShotLink tracking and the need for quick updates for gambling data purposes, not to mention weekly featured group streaming, it’s even more obvious when stuff like this happens.

The Spieth shot is in many ways harder to take as a viewer than being spoiled by a leaderboard.

For one thing, this was what the network was showing:

I'm sure this has something to do with how golf is the toughest sport to broadcast pic.twitter.com/jKz6nfx6Xt

For another, there’s the matter of the delay; when it’s minutes later, pretending something is live doesn’t work. No one likes “This, a moment ago:” but it’s a more honest approach than what CBS offered there, with Baker-Finch either faking amazement when he knew the outcome or somehow being way, way out of the loop and only seeing a shot minutes after all of golf Twitter knew it happened.

The conclusion: constant leaderboard good. Showing as many shots as close to live as possible: also good.

Do more of that, please.