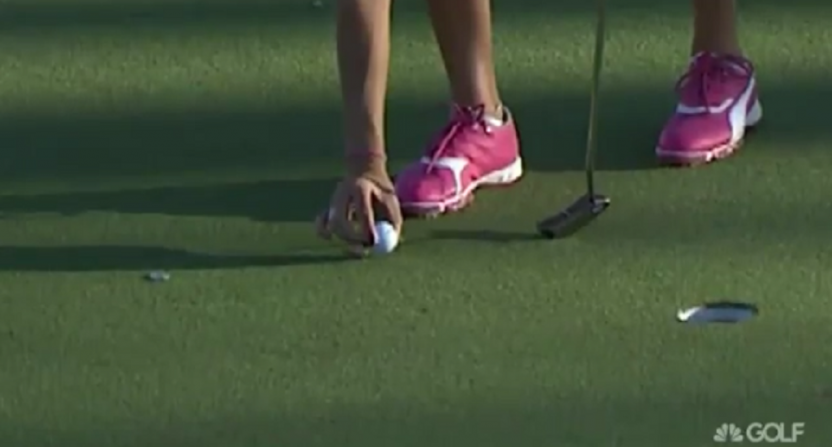 A bizarre and completely ridiculous situation led to Lexi Thompson finishing as the runner-up instead of the champion at the ANA Inspiration, one of the LPGA’s five majors.

However, the infraction took place in the third round on Saturday, and Thompson wasn’t even told about the four-stroke penalty until after she completed the 12th hole during Sunday’s final round. A two-shot lead (at 16-under) after the 12th hole immediately turned into a two-shot deficit for Thompson.

And here’s where the story gets even more absurd: the tournament officials were alerted about the infraction thanks to a TV viewer’s email tip! For real.

Lexi Thompson was assessed a 4-shot penalty for an incorrect marking of a ball and signing an incorrect card yesterday at #ANAInspiration pic.twitter.com/6pNJ5haql9

Thompson would still manage to force a playoff with against So Yeon Ryu, but lost on the first hole of the sudden-death format.

Thompson was understandably very emotional after the finish:

There has been plenty of reaction to this story from golfers, media members, and celebrities:

Viewers at home should not be officials wearing stripes. Let's go @Lexi, win this thing anyway.

???@Lexi is SO CLASSY. Handled that with grace and fight. Career defining moment. https://t.co/CEzHlckCpE

As we said on @GolfCentral: an official dedicated to watching broadcast should be the only one who can use tv to detect an infraction.

Thanks @lpga @GolfChannel team for a great week.

This joins VanDeVelde & FailMary as most bizarre I've called.

So much respect for @Lexi

Shame on the @LPGA for giving @Lexi a 4 stroke penalty for a moved ball yesterday on the 17th hole. Do it yesterday not today. No more.

Viewers should not be able to call in rulings.

Who's watching what is happening to @Lexi @LPGA? Can't believe this is happening. A viewers calls in a rule a day late or ever…. Not right

Whatever number this is that people can call in, it needs to go away. Hoping it doesn't cost @Lexi! https://t.co/wtKkU9pg2o

Infuriated w @Lexi ruling. Who intentionally seeks an inch on a tap in. TV viewers need a day job or have no effect on our system.

USGA butchered a ruling last year and the ANA invitational just saying "you think that was dumb? Watch this shit"

That rule is broken every time a ball is marked

And I thought ESPN’s John Anderson really nailed it on SportsCenter: