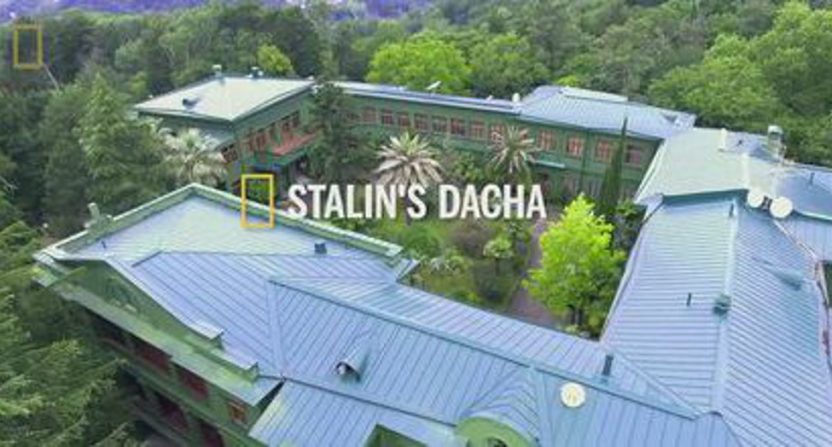 There have been plenty of issues with Fox Sports’ World Cup coverage, and one that’s sparked some debate has been their long-announced avoidance of “Russian geopolitical stories.” Well, they’re apparently not avoiding all political topics. On FS1 Monday ahead of the Spain-Morocco match, Fox ran a segment from NatGeo (majority owned by Fox) showing off former Soviet dictator Josef Stalin’s dacha (vacation house) in Sochi.

The segment starts with the cringe-inducing “Think what you will about Josef Stalin, but there’s no denying that this was one of the formidable figures in all of history. Today, we’re visiting Stalin’s dacha, his vacation home right here in Sochi.”

The segment doesn’t get much better from there, with further lines like “It ended up being his favorite place to get away from it all.”  Yeah, you have to get away from all those mass killings of millions, which, shockingly, receive zero mention here. But hey, at least we can see Stalin’s bulletproof couch (where he watched Charlie Chaplin movies, apparently) and his original pool cue. Oh, and “How do tourists perceive Stalin, as a great man in history or as a dictator?” is quite a question.

Honestly, the curator provides the most somewhat-negative comments about Stalin here, with “He was creating a rather great country, but his methods, they are arguable still today” and “whether he was a dictator or a good politician, you know, this is our history.” The reporter, Sergey Gordeev, ends this with “Stalin’s dacha is living history, and the thing about history is, good or bad, it makes us who we are.” And, sure, but presenting an incredibly problematic figure as just “he had a nice house,” without any discussion of why he was controversial or problematic, is quite a selective reflection of history.

As pointed out on Twitter, beyond his work for NatGeo, Gordeev works for the Gazprom (the Russian oil company majority owned by the state)-owned station NTV, so, yeah, he’s not exactly who you’d tab for a hard-hitting Stalin investigation. And the segment overall was absolutely roasted on Twitter:

FOX won’t talk about Russia’s homophobia, racism, corruption or any number of things whose absence provides an incomplete picture of this World Cup, but they will do a “think what you will about Joseph Stalin …” https://t.co/jbKKS4EzeQ

This FOX video piece just started out ' Think what you will about Josef Stalin . . . ' As if there are differing opinions about his legacy

Halftime, so we can all watch this jaw-dropping Fox Sports short on Stalin's dacha. "Think what you will about Joseph Stalin…" he opens before giving a whitewash of mass murder. It's almost a parody https://t.co/a1D3UZLDHk

Did anyone else just see the innocuous Robin Leach-like tour of Joseph Stalin's summer dacha on Fox Sports 1's between games of World Cup coverage? No mention of Soviet dictator's reign of terror and murder, presented only as a "polarizing figure." Interesting euphemism, Fox.

“Regardless of what you think of Stalin…” Uhhh he killed upwards of 20 million people, so I think most would agree he was a bad man. What are you doing, Fox??? https://t.co/I4QpJMLjbC

The sad thing is that even this would have been more appropriate than what was actually said in the piece.

In Fox’s rewriting of history, all we know is that Stalin ruled Russia, was worried about getting killed for some reason (wonder why) and had a kick ass vacation home. https://t.co/nzq6c8EtFX

There of course can be debates about all manner of historical figures, but Stalin is in a pretty rare class when it comes to deaths attributed to him. And discussing Stalin this way isn’t just about history, it’s about modern politics as well; emphasizing Stalin’s “strength” and glossing over his atrocities is something very in line with the current Kremlin’s goals, and Russian president Vladimir Putin told Oliver Stone last year that “excessive demonization of Stalin is one of the ways Russia’s enemies attack it.”

Running a segment like this is far from apolitical, and that’s a pretty interesting move for Fox, considering how careful they’ve been to avoid any sort of negative commentary on Russian politics. The criticism they took here is well deserved.