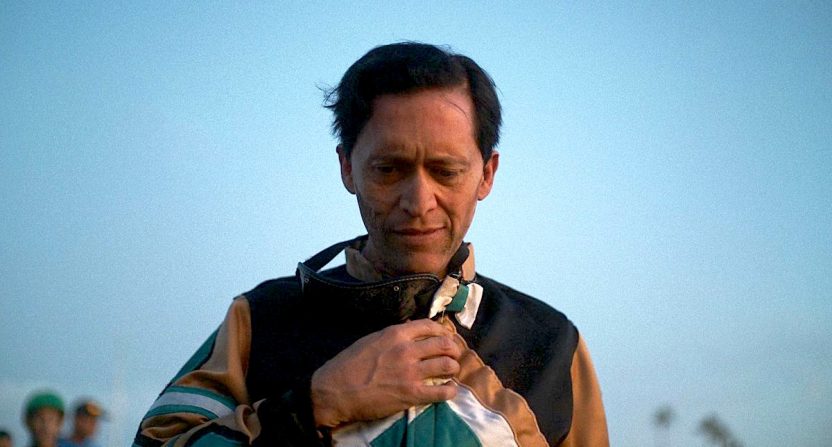 Could the best sports movie of 2021 be a story about a jockey trying to win one last championship in his career? (Apologies to Space Jam: A New Legacy, which will probably earn that title.)

During this past weekend, the 2021 Sundance Film Festival debuted. As you’d expect, film critics and writers watched this year’s showcase of new movies — many looking to be purchased by distributors — virtually rather than gather in Park City, Utah. And one of the films that impressed critics is titled Jockey.

Starring Clifton Collins Jr. (Westworld) as Jackson, a veteran jockey facing the end of his career far from the spotlight of Triple Crown events, Jockey has drawn some comparisons to 2008’s The Wrestler. Both movies feature characters whose bodies and lives are broken down, striving for one last chance at success at the lower levels of their sports.

Jackson has slogged for years racing in smaller circuits and is struggling with the years of injuries that horse racing has inflicted on his body. But his longtime trainer (Molly Parker, Lost in Space) has a new horse that appears capable of winning a championship, which compels him to try and win one last race. Along the way, a young jockey (Moises Arias) claiming to be Jackson’s son enters his life, giving him a chance to possibly make amends.

Look, JOCKEY is very much “‘The Wrestler’ but with horseys and more magic-hour shots,” but if this is the movie where people finally fucking pay attention to what an extraordinary actor Clifton Collins Jr. is, then I’m on board. Ditto Molly Parker and Moises Arias. #Sundance2021

Director Clint Bentley based the story (co-written with Greg Kwedar) for Jockey on his father, a professional rider. Before filming, Bentley and his crew spent months at Arizona race tracks watching jockeys and learning the horse racing game. Besides the three featured actors, most of the supporting players in the film are actual jockeys still competing in the sport.

Following its showing at Sundance on Sunday, many critics gave positive reviews for Jockey.

Not always interested if a film says something new. Rather it be good at what it’s saying. Ex. Plenty of horseracing films. But Clint Bentley’s JOCKEY, starring Clifton Collins Jr. in a much-deserved role, is one of the best shot and acted. It feels fully tangible. #Sundance2021 pic.twitter.com/PuVGkigeyp

If you program a horse movie in your fest, it’s guaranteed that I’ll watch it. JOCKEY is so beautifully paced and deeply felt. Doesn’t break new ground, but the cinematography & Clifton Collins Jr.’s performance alone deserve all the attention. Those final minutes… ❤️ #Sundance

IndieWire’s Ryan Lattanzio praised Collins’ performance and the beautiful Arizona sunsets photographed throughout the film. For The Hollywood Reporter, Sheri Linden enjoyed how the film chronicled the working-class life of those competing for love of the sport, far from Triple Crown glory. She also made note of the score composed by Bryce and Aaron Dessner of The National. According to ScreenDaily’s Tim Grierson, the acting performances lift the film above a predictable story.

Sony Pictures Classics apparently liked Jockey as well, acquiring worldwide distribution rights for the film shortly before its Sundance screening with eyes on releasing it this year. Whether or not the movie will get a theatrical release in the current COVID-affected marketplace or be immediately available on streaming has yet to be announced.