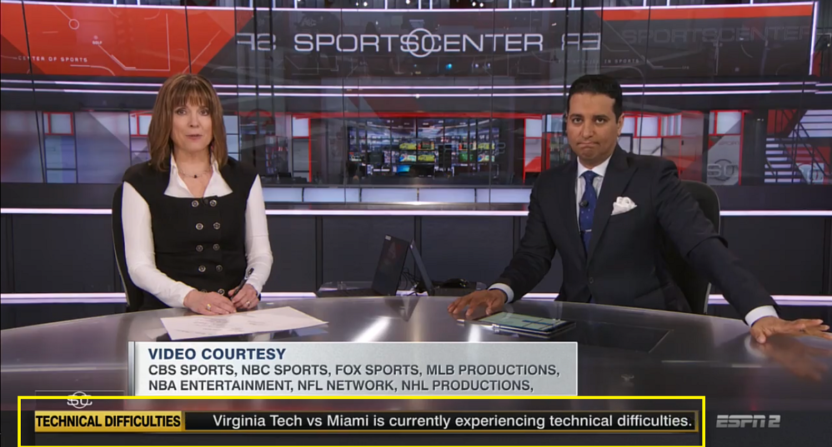 Viewers tuning in to ESPN2 for Saturday’s noon clash between Virginia Tech and Miami from Miami’s Watsco Center were surprised to find they couldn’t actually tune in. Technical difficulties forced ESPN to extend SportsCenter, though Hannah Storm and Kevin Neghandi filled the air admirably:

Though viewers were still not that pleased, understandably so:

Always trouble when you try to broadcast from small, out of the way college towns like Miami.

Thanks to these technical difficulties, I've now watched more SportsCenter in the past 8 minutes than the past 3 years combined

Eventually Storm and Neghandi threw it to ACC basketball, but not Virginia Tech-Miami:

Coverage did eventually return, but not until more than 20 minutes of real time had elapsed:

In the end, that meant they didn’t join the scheduled broadcast until the under-12 media timeout, with Virginia Tech leading 16-11:

Technical difficulties are actually pretty rare, all things considered, especially when you think about how many live events are broadcast daily across the spectrum of television and streaming. Twenty or so minutes to fix a technical problem never feels longer than when you work in broadcasting.

It’s unfortunate they struck today; hopefully things are back on track for the remainder of the game, which Virginia Tech leads 39-32 at halftime.