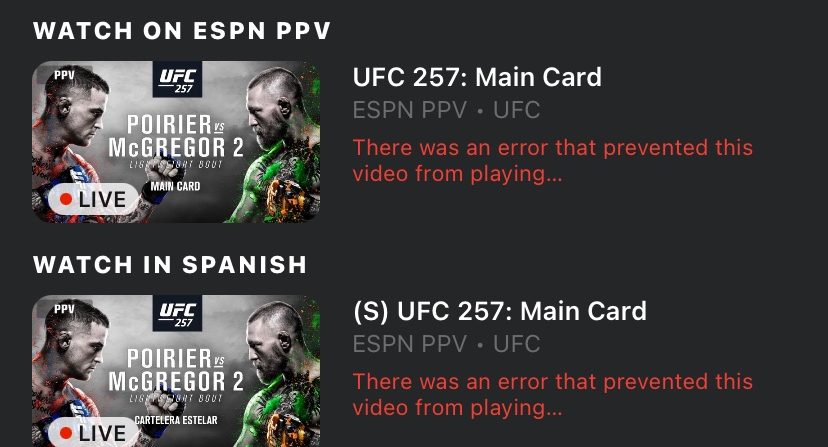 UFC 257 was a highly anticipated event many had purchased before tonight. Many who paid $70 were expecting to see Conor McGregor fight for the first time in over a year as he would face off against Dustin Poirier in the main event. That may have been the plan but that plan was somewhat derailed thanks to a technical issue that prevented people from watching on ESPN+.

Many people flooded Twitter expressing their displeasure of not being able to watch the fight they paid for. @ESPNPlusHelp eventually acknowledged that there are some streaming issues but that was after many people had already shared throughout the night that they couldn’t watch. At 12:11 AM ET, it was announced that the problems were fixed, though some replied that they were still experiencing problems.

We are currently investigating streaming issues impacting some customers— our teams are actively working to have affected viewers back to streaming as soon as possible.

Looks like everything is streaming normally now! If you have any questions please see https://t.co/GNCyXA5BBz

Still holding out hope that this ESPN+ app might actually work and I might actually get to watch the fights that I paid for. What a let down tonight has been so far. #ufc257 @espn @ufc

The irony of UFC attacking illegal streamers while those of us that want to purchase it legally can’t watch it because ESPN+ sucks kangaroo ass is pretty wild.

If your UFC PPV is working, holler at me. Let’s FaceTime or something…

I finally decided to pay the money and buy a @ufc PPV… and my ESPN Roku app suddenly stops working… Is anyone else having this issue?@ESPNPlusHelp pic.twitter.com/4H4FAFQjPs

Half the UFC's own roster can't get the ESPN+ app working to watch #UFC257 pic.twitter.com/TbYiQjxVXo

Hey @ESPNPlusHelp? I have a subscription, just bought another with the @ufc PPV just to watch the fight and nothing! What the hell?

This honestly may be the last time I buy an @ufc PPV. Spent $70 and can’t even watch the PPV because of an error… It’s going to be ridiculous trying to get a refund. #UFC257 pic.twitter.com/irVukuLQyI

I can hear Dana now "Conor McGregor is such a star, he crashed the Disney servers. Thats how much of a star this kid is…" #UFC UFC PPV

Hey @espn I have the ufc ppv purchased and you just kick me off of it and don’t let me watch it. Are you serious

#ESPNplus is so trash…the only time I get this message is during @ufc PPV cards… thanks @danawhite appreciate you ? pic.twitter.com/sAYLit8aaB

lol for the last 2 weeks, Dana White talked so much shit about people pirating UFC streams, then proceeds to have a UFC PPV be unwatchable for many people that bought it legally. Good job, bruh.

Wish we could actually see the @ufc PPV !!!!!! pic.twitter.com/cnrpxCaKL1

#espnplus @ESPNPlusHelp @espn thousands and thousands of people paid $70 plus for the @ufc ppv and None of us can watch it!
I promise I won’t watch another event if we don’t get our money back!!!! pic.twitter.com/UXkeEM7zvi

It wasn’t just ESPN+ having issues. People from around the world seemed to be in the same boat like those watching on Virgin Media and BT Sport in the UK. At least for those viewers they only needed to pay £20 ($27) but at the same time, they also had to stay up all night in order to watch the show.

Come on #virginmedia this is needs to get sorted ASAP! #UFC257 pic.twitter.com/GKA79rSgZQ

@btsport morning! I’ve just purchased the UFC PPV on my mobile app and had the payment confirmation come through but can’t view it, it’s asking me to purchase it again! Any help would be great.

Ordered the UFC PPV on Virgin TV and just getting a black screen belta ?

@virginmedia I have booked the ufc ppv tonight and can’t get it on this is all I see pic.twitter.com/Hw1wG7n4zB

@virginmedia was holding out hope that the issue would be sorted by 3am. Guess not ? pic.twitter.com/IZJq9eqjdf

What makes this situation especially bad is that ESPN+ is the exclusive place to legally watch UFC 257 in the United States. If there was a non-streaming option, people who have cable or satellite could’ve bought the PPV without the fear of having a streaming issue. Now, with just one streaming place to get the event, not only are viewers screwed when an issue happens but there isn’t much motivation for ESPN to improve things and ensure this doesn’t happen in the future because they’re the only (legal) game in town.

Even though Dana White was targeting illegal streamers earlier this week, this is a reason why some people watch illegal streams. Even under perfect streaming circumstances, the show itself is going to need to be good to make $70 for a UFC fight worth it. And that’s not a guarantee. McGregor could win in five seconds and…that’s that for those who paid to see that fight. And when there are streaming issues like this, it really diminishes the value for anyone to part with their money for a badly presented product or the possibility they pay and won’t be able to see future fights. I’d like to say something like this won’t happen again for a high demand event but don’t hold your breath. Streaming providers will always try to get by with the bare minimum and that’s not going to change.