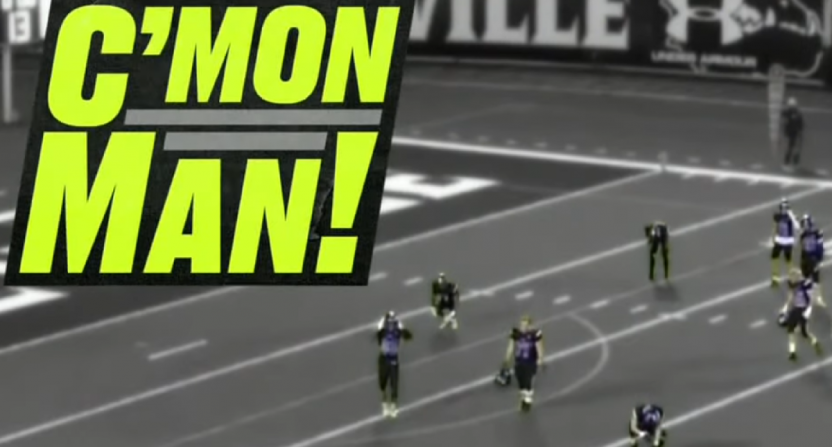 Monday Night Countdown’s “C’Mon Man” segment is typically a bit of a pro and college blooper reel, pointing out some obviously blown plays and funny moments from the weekend in football.

Which is fine! Professionals get paid to have their play scrutinized after the fact, and college players should get paid for it but they certainly know they’re under a bigger spotlight. Last night, though, Randy Moss’s portion of the segment focused on a high school player in the Arkansas state playoffs.

You can watch the segment here, if you want. It begins at the 1:37 mark.

That’s not a good look for Moss or for ESPN. When you’re making fun of a ref falling down and taking down defenders in a Packers-Jaguars game, that’s one thing. A high school quarterback not properly executing a weird clock situation, leading to his team being eliminated from the postseason, is probably not something that needs to be broadcast to a much wider audience. Watching Moss use Bladen Fike’s name repeatedly while basically admonishing him for getting his team eliminated is, well, gross.

Both Fike and his head coach responded on Twitter, taking a fairly high road.

It’s disheartening to see @espn run a segment like this on a kid. I as HIS HEAD COACH take full responsibility. Any criticism needs to be directed towards me. @BladenFike is a tremendous young man with a bright future! Proud to be his coach! #FamilY

(Note: running the segment about the coach would have also been in poor taste, but would have been a lot closer to the mark from a football perspective. The team shouldn’t have even been lining up to snap that ball, given the situation. Take the delay of game, leave one second on the clock, and then snap and kneel it.)

I took my eye off the clock. However, criticizing me off of one play does not define me as a Quarterback. I am much better than that! I love my team and my coaches! Thanks for having my back. #familY #PurpleReign @CdickC @RandyMoss https://t.co/Nfvl7wXYaE

Good for them for responding to something they should have never had to deal with in such a positive manner. Taking what may have been easily a kid’s worst moment of the season, or even his playing career, and amplifying it on such a huge platform, shouldn’t happen. If they’d shown the play and used it to send a more positive message, it would be slightly more defensible, but this came across as cruel more than anything.

Hopefully they just ban all high school clips from now on.