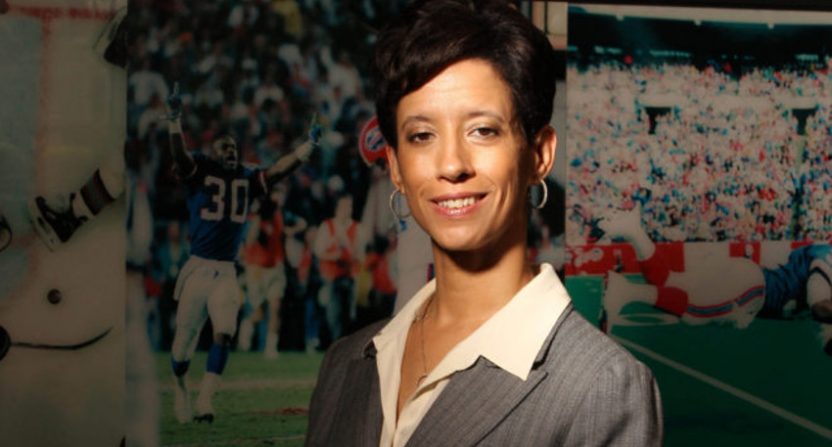 ESPN’s The Undefeated just made another impressive hire, and one that also shows some of the diversity challenges the traditional sports media faces. They’ve named Lisa Wilson senior editor for sports, and her hire would be noteworthy in its own right; she’s done plenty of impressive things, especially as the executive sports editor at The Buffalo News since 2011. However, what really stands out in the release is the line that she “is the nation’s only black female sports editor at a major metropolitan daily.”

Whether that’s strictly true appears to depend on how you define “major metropolitan.” Someone else who should probably be discussed here is Jewell Walston, sports editor of The Winston-Salem Journal: Winston-Salem’s population was estimated at 241,218 in 2015, while Buffalo’s was estimated as 258,959 in 2013, so there’s not a great deal of difference there. As Lori Chase notes, though, the News has a higher circulation, so it may be a circulation-based category. In any case, black female sports editors are unquestionably rare. A June 2016 piece by Malika Andrews of the Sports Journalism Institute that includes an interview with Wilson says that she and Walston (mispelled as Jewel Watson there) are the only African-American females editing sports sections, along with just three African-American males (Mark Bradley of the Palm Beach Post, Eric Barrow of the New York Daily News and Marcus Carmouche of the New Orleans Times-Picayune). (Update: It’s unclear if that piece is based on a particular circulation size, but it is missing some people, including Jason Murray of the Syracuse Post-Standard.)

For a more quantitative look, the University of Central Florida’s The Institute For Diversity and Ethics in Sport (TIDES) regularly does reports on diversity in various sports leagues, and they issued a The Associated Press Sports Editors Racial & Gender Report Card in 2006, 2008, 2011, 2012, and 2014, evaluating over 100 newspapers and websites. The 2014 report was strongly critical of diversity in sports media, especially when it came to gender:

Richard Lapchick, the Director of the Institute and primary author of this report, noted, “It has now been
eight years since the publication of the 2006 Report. While there was some change in the five key
positions we examined for race, there continued to be a failing grade for gender in all five categories. I
applaud the APSE for it transparency and its determination to get better.

What’s particularly notable about those numbers is that it’s not just a case of women and minorities not entering sports journalism in the first place (although there are plenty of barriers there as well), but a case of advancement once they enter the field. The numbers show that the percentages of women and minorities are significantly better in reporting and copy-editing/designing roles than they are in leadership positions, and that’s problematic. As Wilson told Andrews in June 2016, it’s vital to have diversity at the top as well as in the ranks:

When Lisa Wilson asks a classroom of college journalists how many of them want to be editors, she rarely sees a single hand raised, let alone any hands of color.

“I just don’t think it’s perceived as a glamorous position,” Wilson said. “(It’s not) something that you grow up and you want to do. … And just imagine you’re a young reporter of color and you don’t have any editors (of color) to encourage you.”

…Working in an environment that doesn’t feel familiar, and doesn’t have faces of people who look like you, can be a challenge for journalists of color. Having few editors of color means few role models for talented young minority journalists.

“When you don’t see diverse editors, you probably get discouraged along the way,” Wilson said. “Why would you want to do this if it looks like you could put all this time in and never get there?”

It should be noted that ESPN has consistently been a leader in diverse hiring practices. In fact, Lapchick (director of TIDES and primary author of that 2014 report) singled ESPN out for praise in a 2013 Sports Business Journal column:

It is discouraging because the percentages of people of color and women in the top-level positions in sports media remain dismally low. The hiring practices of ESPN appear to be the only factor that is bringing up the percentages.

…In each of the reports in 2006, 2008, 2010 and now, ESPN’s statistics for sports editors and columnists raised the numbers. Without their key hirings, the statistics would be even worse than they were in 2006.

Of the 52 men of color who are columnists at this circulation level, 37 work for ESPN, which employed 28 of the 40 African-American male columnists, three of the six Latino columnists, and all six Asian columnists. If ESPN’s male columnists who are people of color were removed, the percentage of columnists of color at this level would drop from 20 percent to 7 percent.

When we did the study in 2006, Jemele Hill, then a columnist at the Orlando Sentinel, was the only African-American woman columnist in America. Seven years later, Hill is at ESPN, and Shannon Owens, the woman who replaced her at the Sentinel, is the only other female columnist of color.

ESPN has continued to make strides on that front, with further hires of minorities and women in many senior position. Wilson looks like an excellent addition for them. For one thing, under her leadership, the News won significant awards:

During Wilson’s tenure, The News earned two Grand Slams (2012 and 2014) as a Top 10 daily, Sunday and special section, as well as a Top 10 website, in the Associated Press Sports Editors’ annual contest. In all, The News earned a Triple Crown (Top 10 in three of the four categories) on three occasions – 2011, 2013 and 2015. Wilson was also instrumental in helping transform The Buffalo News into a digital hub for regional sports news and information.

Also from the release, it sounds like her role will be substantial:

Wilson will be responsible for content on The Undefeated’s sports vertical while overseeing a team of seasoned sports writers who produce compelling daily stories and long-form features. She will also spearhead sports-focused multimedia projects at The Undefeated and will work with counterparts across ESPN platforms on other content.

“We are thrilled that Lisa is joining The Undefeated. She is highly respected across the country, and will bring gravitas and creative energy to our sports coverage,” said Kevin Merida, ESPN Senior Vice President and Editor-in-Chief of The Undefeated.

The hope is that more outlets will recognize the importance of diverse hires, especially in sports leadership positions. That doesn’t mean instantly hire someone with no experience for a leadership role just because of race or gender, but it’s worth considering that there are plenty of experienced, diverse people who do deserve consideration for leadership roles. Wilson herself worked at the Niagara Falls Gazette from 1992-1998 as a a sports reporter, features editor and sports editor before joining The Buffalo News as a copy and layout editor in  September 1998 and rising through the ranks there, earning promotions to assistant sports editor in 2007 and executive sports editor in 2011. The numbers show there are many others who have done well at those lower levels, but very few women or minorities who have received prominent sports editor jobs. Wilson’s hire by ESPN is a good opportunity to look at that, and to convince newspapers that diversity can be well worth it.