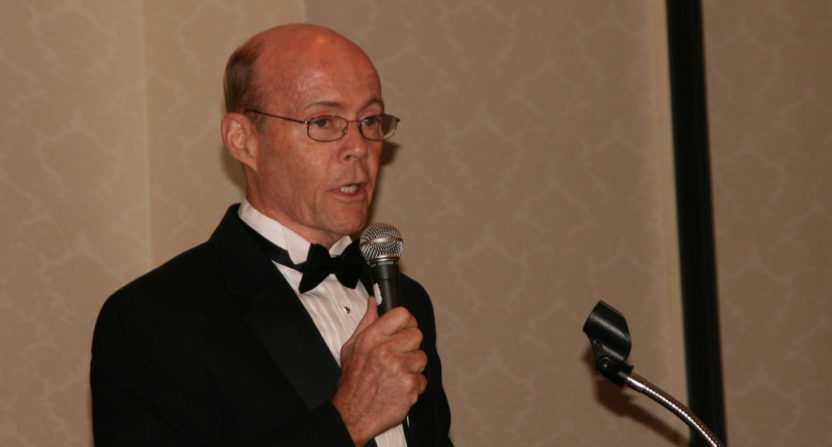 Covering 50 championships is incredible, but that’s what ESPN’s Larry Rawson is doing this week. Rawson has been with ESPN since 1980, making him their fifth-longest-tenured TV commentator (behind only Bob Ley, Cliff Drysdale, Chris Berman and Dick Vitale), and he’s covered the Olympics, the World Track and Field Championships, the Boston and New York City marathons, and plenty of university-level championships. This week, he’s calling his 50th NCAA championship, and ESPN Front Row’s Anna Negron wrote a nice piece on him for the occasion. Here’s what Rawson told her:

“I find myself very humbled by that achievement and number,” said Rawson, a former Boston College record holder in the mile. “It causes you to reflect back on the wonderful experiences and places you’ve been and had a chance to report on for the sport.

“I’m truly honored that ESPN has liked the quality of my work over these many years. I continue to try and find new insights into the different events to create the ‘wow factor’ so fans can appreciate these great athletes.”

…“For me, it’s all about the athletes,” Rawson said. “I love trying to make them look as great as they are.”

Rawson has certainly done that, and he’s been recognized for it. He won a Sports Emmy for his work on 1991’s Outside The Lines report, Steroids: Whatever It Takes, and he’s been inducted into Running USA’s Hall of Fame and received the Penn Relays’ Lifetime Achievement Award.  And he’s well-appreciated by his colleagues, too:

“Larry’s dedication and commitment to college track and field and cross country coverage over the past few decades is incredible,” said Chris Farrow, coordinating producer of ESPN’s four-day coverage of the NCAA Championships from the University of Oregon’s Hayward Field.

“He’s a great ambassador for the sport, and we are fortunate to have him as part of the premier college track event of the season on ESPN. Our prime-time television coverage, coupled with ESPN3 surround coverage with up to four feeds, give track fans access to more coverage than ever.”

Rawson also fought a successful battle with Stage IV throat cancer, which threatened his career in 2005. Here’s some more on that fight in his own words, from the website of the Memorial-Kettering Sloan Cancer Center:

The CT scan showed that I had squamous cell cancer at the base of my tongue and the cancer had spread to two areas of my lymph nodes. He called it a stage IV cancer. That scared me. He told me that my voice would probably be raspy for the rest of my life and that I would always have dry mouth because the radiation treatments would kill my salivary glands.

As a professional broadcaster who covers track-and-field events and major marathons for ESPN, I could see a career I loved possibly coming to an abrupt halt.

…Knowing that I was a professional sportscaster, my doctors were very focused on saving my voice. Memorial Sloan Kettering audiologists conducted a complete hearing test before the start of chemotherapy, because some chemotherapy can damage hearing. I didn’t realize that I already had some minor hearing loss. Based on that information, Dr. Pfister decided to use the chemo drug that would be least likely to cause a further hearing problem. I’m very grateful for the attention they paid to preserving my speech and hearing.

…I never missed a day of work throughout the two months of chemotherapy and radiation therapy! During that time, I received three rounds of chemotherapy with a couple of weeks off in between. Each round involved a four-day continuous infusion of chemotherapy into my body. A portable pump sent the drugs through an access port, which had been implanted in my chest. The port sent the chemo into a vein, which went directly to my heart and then was pumped throughout my body.

Having the pump meant that I didn’t have to stay in the hospital to receive my treatment. I live near the hospital, and walked there five days a week for radiation treatments and, on certain days, a dose of another chemotherapy drug given through the port. Although I was occasionally tired from the treatments, I could still function pretty well, despite many issues that were going on.

…I am delighted to say that I have been cancer-free since the fall of 2005. My treatment ended less than one week before the 2005 New York City Marathon — and I was able to announce the race for ESPN, as I did for the many marathons I had broadcast in previous years. I had to hit the “cough” button occasionally to turn off my microphone so I could get the phlegm up, but I was still able to announce the entire race. At the end of the show, my co-host, Al Trautwig, presented me with a medal for my own endurance and courage. It was an emotional and moving moment for me.

Rawson’s also faced some much less serious, but still challenging, situations over the years. Here’s a fun video Negron found of Rawson in action at the 1984 Arco Invitational. He was filming a standup segment on the course when the race started, so he really had to hustle, bringing his mike along with him.

Now that’s some good speed there. Here’s to many more years of Rawson in action.