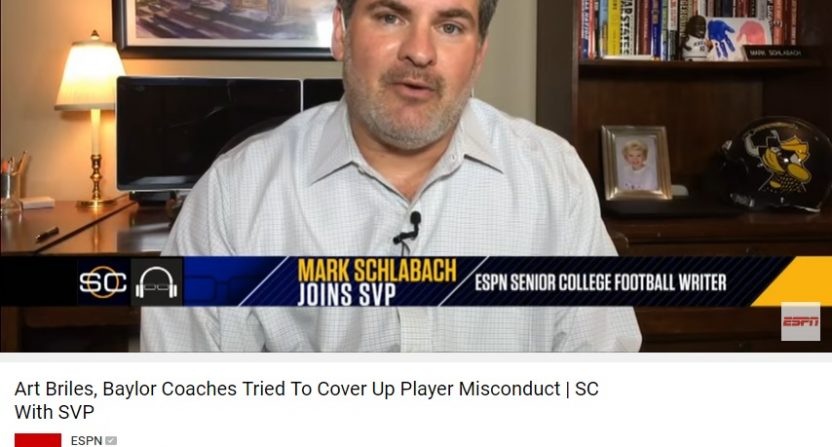 Considering all the clips you can regularly find on YouTube, it might surprise you to know that ESPN hasn’t officially had videos on the site since 2015, when the network opted not to be included in the YouTube Red service with no advertising.

But as of last weekend, ESPN is back on YouTube. At least in limited doses, with clips from First Take and SportsCenter with Scott Van Pelt. The clips are also available on the YouTube Red service from which the network previously decided to keep its content.

Whoa, what are ESPN's videos doing on YouTube?! It's been a while @awfulannouncing pic.twitter.com/lmAh9tAGe8

So what changed exactly? ESPN isn’t saying, other than issuing a statement to the Wall Street Journal.

“We were able to come to terms on a short form video agreement for YouTube and YouTube Red as part of our larger deal with The Walt Disney Company,” said an ESPN spokeswoman.

Somehow, The Mouse made it happen.

According to the WSJ‘s Mike Shields, “rights and legal issues” were originally the factor in ESPN’s decision to pull its content from YouTube. But Google working on a new online TV service might be a major reason for the change in direction. Disney is negotiating to have its channels on the service, which would include ESPN. Being on such a service is increasingly important for ESPN, as the network continues to lose subscribers to cord-cutters preferring to avoid cable and satellite packages.

Another key for ESPN going back on YouTube was likely the ability to sell advertising directly, something the network couldn’t do under Disney’s previous agreement with YouTube Red. The blueprint for such an arrangement appears to be ABC’s Jimmy Kimmel Live, which sells pre-clip ads for their YouTube videos. YouTube gets 45 percent of the ad revenue under that partnership.

With the arrangement in place, more clips from ESPN shows will presumably become available, whether it’s additional segments from SportsCenter, features from programs like Outside the Lines and E:60, clips from other debate shows like Around the Horn and Pardon the Interruption, and possibly studio shows like The Jump and NFL Live. There is certainly plenty of material ESPN can draw from for YouTube.