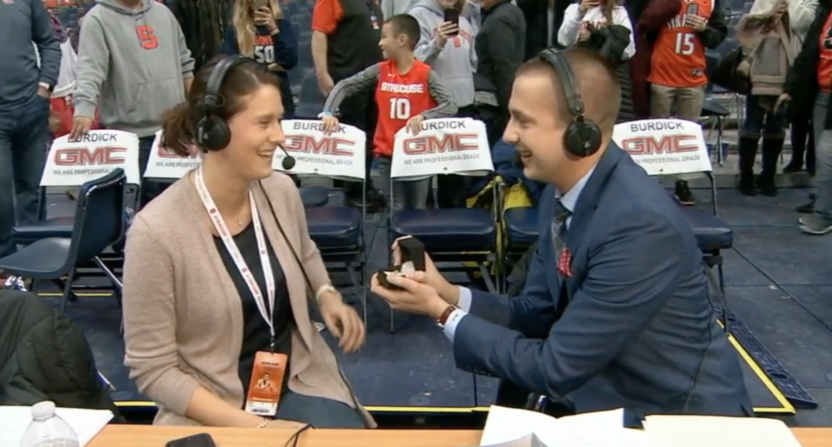 ESPN play-by-play broadcaster Mike Couzens is probably going to remember Saturday’s basketball game between Syracuse and Notre Dame for a long, long time — not because of anything that happened on the court or on the air, but because of what happened afterward.

Following the game, which Couzens called alongside Cory Alexander on ESPN2, the Syracuse alum invited Erin Beadle, his girlfriend of 4 1/2 years, onto the ESPN set, showed her a montage of moments they shared together, and proposed to her. She said yes, and fans behind the two of them clapped and cheered.

Based on ESPN Front Row’s write-up, it sounds as if the proposal required a lot of moving parts. Couzens reportedly told a number of ESPN colleagues, including his broadcast partner, as well as a Syracuse sports information director and Syracuse Post-Standard beat writer Mike Waters, who asked the newspaper’s photographers to capture the moment.

How did Couzens coax Beadle onto the set after the game? He enlisted Alexander to talk her into it.

In order to get Erin, a graduate of Miami-Ohio, to put on a headset and sit alongside Couzens postgame, Alexander, the former Virginia point guard, dished out yet another assist.

“Cory told Erin that we wanted to get her on headset to talk about her travel experience [she didn’t get to the game until halftime], because we were doing a short piece on how the weather had been,” Couzens said. “She didn’t want to do it at first, but being the convincing guy that Cory is, he gave her a look as if to say, ‘We need you in that chair’ and she obliged.”

“Mike and I began discussing the game Tuesday morning, and he explained his plan and asked if we could put his pictures in order and play them while they were both at the desk after the game. In true television fashion, Mike had everything timed out.

“It was certainly out of the ordinary for us,” he said. “But I was glad we were successfully able to be a small part of a special and memorable day for them.”

In the end, Couzens pulled off a pretty impressive and ambitious proposal. Beadle seemed to put it well when, in the moments after slipping on her ring, she told her fiance “you’re ridiculous.”