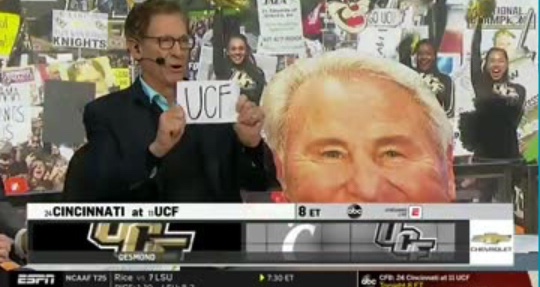 Screw Disney World, the set of College GameDay is the happiest place on earth. Mostly because it’s BYOB and there are significantly fewer jam-eating kids running about. But today we have the best of both worlds as GameDay visits UCF in Orlando.

We’re 12 weeks into the football season and today is filled with stiff matchups between the likes of ::checks notes:: Alabama-Citadel, Georgia-UMass, LSU-Rice, Auburn-Liberty, and South Carolina-Chattanooga. Guys, that’s not a football schedule, that’s a bakery menu.

Wanna see me seamlessly segue from snarking on the SEC to something else? Here goes. I’m not gonna bury the lede here: the most important thing that happened on this episode is Lee Corso swore on air again.

Lee Corso: Still got it. pic.twitter.com/E8FHBbdbmT

His co-hosts laughing like school children absolutely slays me. The man is a national treasure.

Gimme Anything with Mike Leach
In an epic battle between what’s stupider, his name or his mustache, Gardner Minshew gave us insight into why exactly he looks like Little Bill from Boogie Nights, and why he eschewed Bama for Washington State. First the pornstache: contrary to popular belief, he didn’t lose a bet. He thinks the ‘stache embodies his team’s mentality: free, loose, and fun. And why he chose WSU? As a journeyman, he signed with Alabama until he got a call from Mike Leach asking him, “Do you want to be the backup quarterback or do you want to lead the nation?” The rest is history.

Gardner Minshew. The. Second. Two people have that name.

Game: #24 Cincinnati Bearcats at #11 UCF Knights
Location: Orlando, Florida
Did Opposing Fans Show Up: There were a few cheerleaders. There were a few signs. There wasn’t much else.
Washington State Flag Status: It’s been 221 weeks. I’m retiring this piece until USPS loses a flag in transit and then I’m devoting a whole article to that. 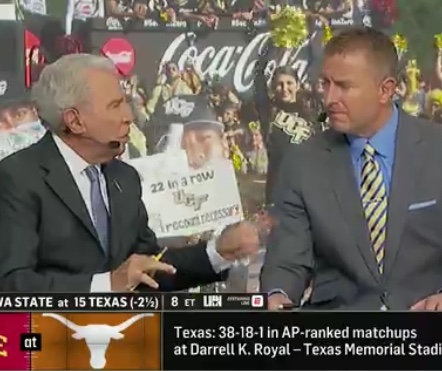 22 in a row. No recount necessary.

Worst Sign
This is a sixteen-way-tie between all of the “We Want Bama” signs.
Do you really want Bama? DO YOU? 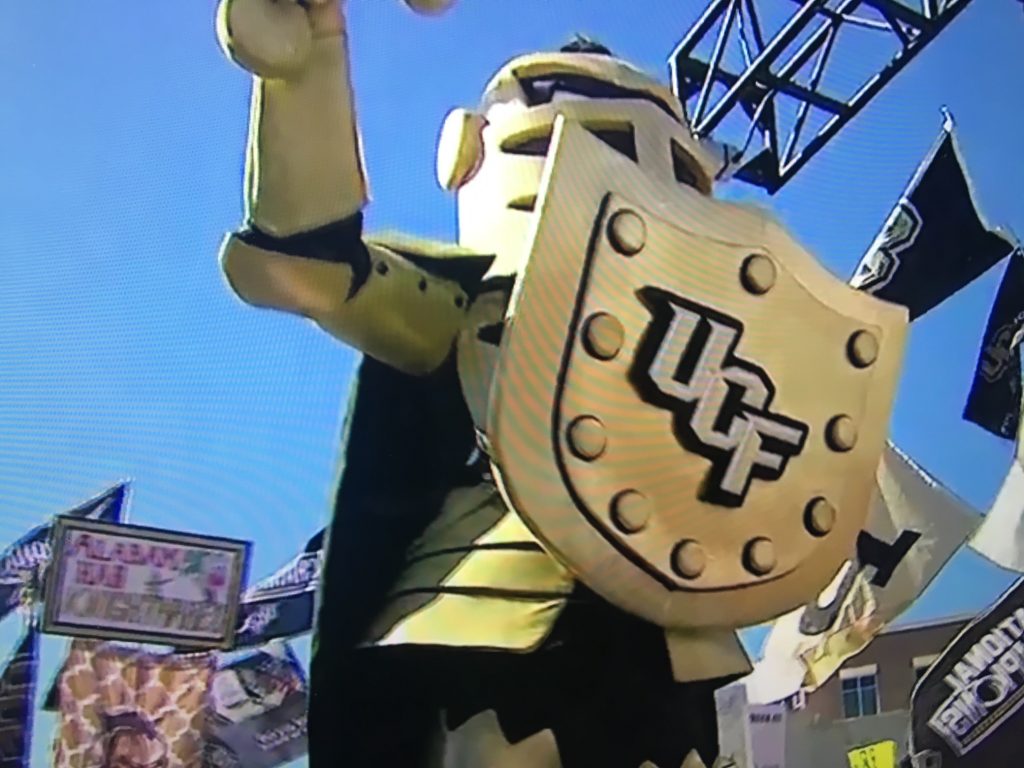 Trivia:  The last team to beat UCF was… ? [Answer at the end of this piece]

Rinaldi Made Me Cry
This week’s sobfest was the story of Ben Abercrombie, a Harvard defensive back who broke his neck and was paralyzed in his first collegiate tackle in 2017. Known as Badgercrombie for his ball-hawking skills, Abercrombie made his first trip back to Cambridge for the Harvard-Yale game, which is played at Fenway today. He hopes to return to school next year.

You Had One Job Winner
You’d think they’d have helped him Sooner rather than later.

Guest Picker
We had a Mike Leach segment and Corso said “Shit” so this episode was already kind of a fever dream, AND THEN THEY BROUGHT OUT THE GUEST PICKER.

Corso’s Headgear Pick
At around 11:55am, Corso inexplicably goes off camera. He is replaced by a Corso fathead.

Herbie reads his picks. And then the master reappears:

Mascot Antics
Between the Knight, the tiny pony, and the cop car, there’s a lot to unpack here.

Trivia Answer: UCF’s most recent loss was to Arkansas State, 699 days ago.