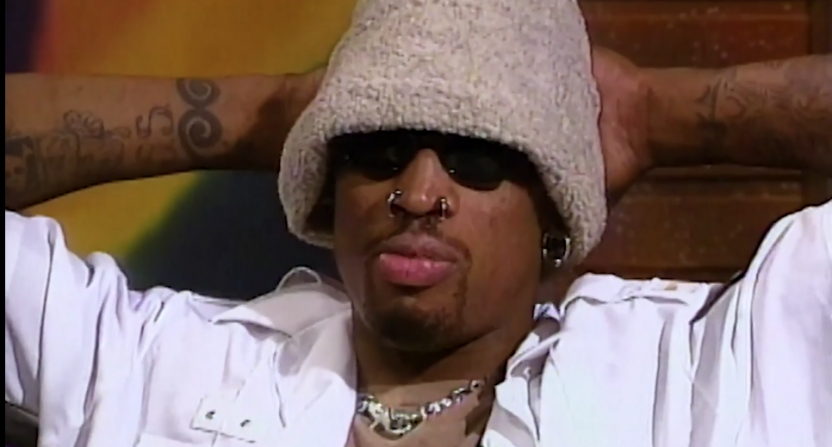 Installment: #103 by ESPN’s count (#104 by mine, counting the O.J. doc as one installment, although ESPN initially counted it as five different 30 for 30s, but now seems to list it separately, not as part of the series. Additionally, one finished project, Down In The Valley, has been suspended from airing.)

Most Similar To: Nature Boy, Brian and The Boz

Review:  Nostalgia versus introspection. In the documentary world, perhaps half of all projects (depending on subject matter) creatively have to navigate these often diverging areas of focus. Given Dennis Rodman won championships for two of the most memorable NBA teams (both of which have or are getting their own 30 for 30 treatments) in history, you could easily see a path where the bulk of a documentary on Rodman would focus on Rodman’s on court career and rise as a pop culture icon. With two hours of run time (including commercials), there is plenty of time spent in Rodman: For Better or Worse covering his unique professional journey. However, viewers expecting this to be the main course will likely be disappointed, because the film’s intent is firmly focused on trying to find some understanding to the enigmatic, and at times, self-destructive, Rodman.

The film itself pokes fun at the premise of framing itself as some type breakthrough into figuring Dennis Rodman out, as it opens with a beautiful shot of ocean waves on a beach. Jamie Foxx’s first line as the film’s narrator then starts, “Uhhhhh okay. Interesting choice. We’re starting the Dennis Rodman documentary with abstract crashing waves. Just please, no ambiguous quotes (just as one appears on screen). No no no no. Just roll the opening credits.”

This is one of many examples of director Todd Kapostasy inserting a significant amount of unconventional style and direction into the film. There are a lot of stylish staged shots showing scenes of an actor as Rodman shot from behind, entering various locker rooms, as an astronaut in space with a basketball, and (of course) a sharp tongued Foxx narrating the film. This was Kapostasy’s first 30 for 30, and I imagine ESPN could tap him again, because he does a great job pacing the two hours and balancing Rodman’s life on and off the court. The film leans heavily on archived news and game footage, as well as interviews in which we see a pretty comprehensive participation, spanning his family, media, and former coaches and players. All in all, this is a strong effort from Kapostasy, who did well with a complex subject matter and an ambitious runtime.

"Rodman: For Better or Worse" will premiere Tuesday September 10th on ESPN ? pic.twitter.com/sUIiVPIqoY

Where Rodman: For Better or Worse may fall a bit flat is that we really don’t get a big payoff for diving into Rodman’s upbringing, inner demons, and off-court antics. Similar to other films in the 30 for 30 universe and the broader sports documentary space, you’re not left with many takeaways that you didn’t have coming in. While I found myself fascinated with a lot unknown or forgotten elements in Rodman’s upbringing and off the court life, it just didn’t really build into anything substantive or provocative. Rodman is a complex person with a messy background, but even those close to him now acknowledge he’s still an unpredictable and undependable enigma whose worst impulses often sabotage a lot of positive relationships and opportunities in his life. Rodman is pushed in the interviews to really make some type of peace or breakthrough, but it just doesn’t come, even in the form of just a token sentence or thought for the camera that could tweak your understanding of him and give you some optimism for him going forward.

That’s more or less the go to tactic for documentarians, where selling some type of closure or breakthrough gives purpose to the film. While it’s refreshing that nothing is contrived for the viewers, it’s a bit of a frustrating dead end for viewers who invest the time in exploring Rodman’s life. While it’s encouraging to see a two hour installment as fast paced and creatively different as Rodman: For Better or Worse, the film just isn’t able to hook onto any larger event, timeframe, thesis, or message. I think for most, reliving Rodman’s unique career and status as a pop culture icon, combined with the deep dive into his complicated life, will make this installment a good investment of time, but I’m skeptical this will live on as one of the more iconic 30 for 30s.