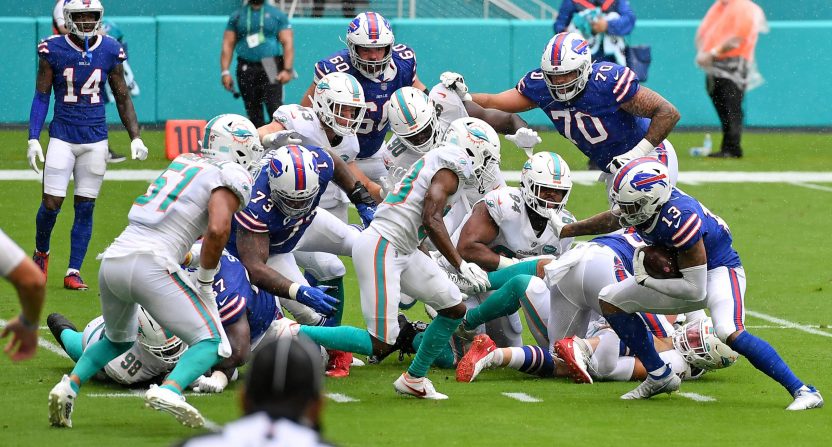 Hard Rock Stadium had an “anything that can go wrong, did go wrong” mandate during Week 2 as viewers missed a portion of the first half of the Buffalo Bills-Miami Dolphins game. CBS suffered technical difficulties at the stadium and fans expecting to watch Bills-Dolphins were treated to the Denver Broncos-Pittsburgh Steelers game until the game in Miami came back.

Technical difficulties happen and it’s obviously not something CBS wanted but fans couldn’t have been thrilled with missing two touchdowns in the process. Viewers missed Ryan Fitzpatrick throwing to DeVante Parker for a two-yard score while the Bills answered with 22-yard TD from Josh Allen to Stefon Diggs during the outage.

The Dolphins or Hard Rock Stadium officials haven’t yet revealed what happened but according to Barry Jackson from the Miami Herald, CBS revealed a power outage at the stadium knocked the broadcast off TV for about six minutes of game time. Compounded with two missed TD’s, it’s definitely not a great time to have a power outage.

CBS said a power outage at Hard Rock Stadium is the reason they have been unable to air Dolphins game in last 10 minutes. Say they're working to get back on air as soon as possible

CBS back on air after missing about six minutes of game time and 2 TDs. CBS says half of Hard Rock had no power which was reason for loss of signal

CBS was still recording during the outage so they have video of the plays but until they aired the footage, the Dolphins got Parker’s TD on their social media channels.

The Bills had us use our imagination at first but eventually, they posted video of Diggs’ TD.

We are diggin’ it. • #BUFvsMIA on CBS

If that wasn’t enough, the game was delayed for nearly 40 minutes due to lightning in the area but the game has since resumed. Hopefully, the wait will be worth it and fans will be treated to, and be able to watch, an exciting ending in Miami.