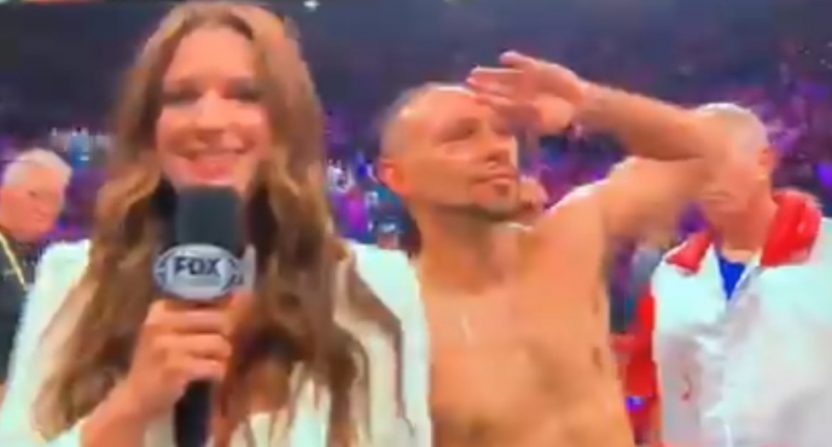 Manny Pacquaio’s split-decision win over Keith Thurman (in a Premier Boxing Champions pay-per-view event in conjunction with Fox) Saturday at Las Vegas’ MGM Arena drew some online backlash for what happened post-fight. Fox’s Heidi Androl interviewed Pacquiao in the ring, and she took some flak online for not askin Pacquiao about the possibility of a rematch with Floyd Mayweather (who was in the building watching the fight).

It’s understandable why some viewers wanted that question asked. The Pacquaio-Mayweather fight in 2015 shattered all sorts of pay-per-view records, and there’s long been talk about and interest in a rematch despite Mayweather being retired for years. (Mayweather officially retired for the second time in September 2015, came back in 2017 for one fight against Conor McGregor, and then retired again). And some previous Pacquaio fights have seen that question asked on the broadcast immediately afterwards. And while Pacquaio and Mayweather are 40 and 42 respectively, there are still a lot of people who want to see them square off again. So there is a case that it’s a reasonable question to get in here.

However, it wasn’t necessarily Androl who decided not to ask that question. It’s perhaps notable that this was a PBC fight, and that PBC is organized by Al Haymon, who’s also known for his management of Mayweather. It’s quite possible that there was a “No Mayweather questions” dictum from someone with PBC, and that sort of demand isn’t all that unheard of in the boxing broadcasting scene. And if that’s the case, then this isn’t about Androl not asking the question, but about her being told not to ask it. It may or not be related, but that fight also featured Androl seemingly grimacing as she walked off after the in-ring interview (perhaps thinking she was already off camera):

At any rate, those looking for Pacquiao to address the idea of another fight with Mayweather got their wish later, as he talked about that after the fight. Here are Pacquiao’s post-fight comments on Mayweather, via Ryan Harkness of MMA Mania:

Pacquiao has long maintained that he’s interested in a rematch, but is unwilling to chase someone in retirement. That’s the general tenor of what he said after the Thurman fight when asked about the chances of Mayweather vs. Pacquiao 2.

“I don’t have an idea,” he said. “My plan this time is one fight at a time. He’s in retirement and he’s enjoying his retirement. He’s inactive. If he’s willing to come back and willing to fight me, then at the time he will announce it, we can say yes.”

Meanwhile, Mayweather’s camp doesn’t seem all that intrigued by the idea at the moment, with business manager Leonard Ellerbe telling Boxing Scene’s Keith Idec last week the Mayweather is enjoying retirement and doesn’t plan to come back to boxing:

“Floyd has no interest,” Ellerbe said. “He has zero interest. He’s been doing this all his life. And after a while, you get burned out. He’s given the sport everything.”

So the odds of a Mayweather-Pacquaio rematch don’t seem all that high at the moment, but those interested did get to hear Pacquaio’s comments on the matter. Just not on the broadcast.