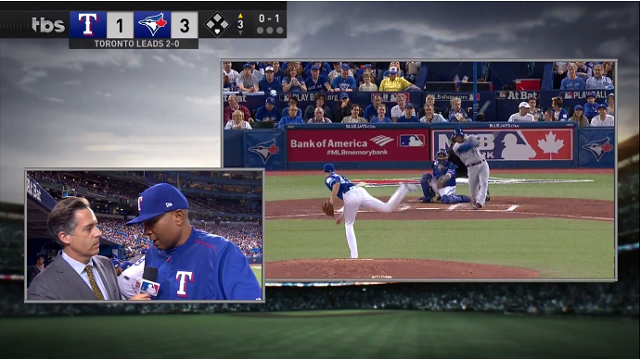 Newsflash: Almost everyone tuning in for baseball games doesn’t care about interviews during the baseball game. This should read sarcastically, but apparently TBS, MLB Network, FS1, and ESPN actually need to be made aware of this news.

“Wait, did that entire game go by without a single interview from the dugout in the middle of an inning? That’s bullshit.”

Any time you wanna stop doing in-game interviews during playoff games is fine by me. @TBSNetwork @MLB

ESPN doing dugout interviews like this is Rock ‘n Jock softball instead of the most important game of the season.

On Saturday, Chicago Cubs relief pitcher Travis Wood hit a home run (you read this correctly), while MLB Network was playing an interview with San Francisco Giants manager Bruce Bochy. Yes, MLB Network understandably didn’t expect a pitcher to hit a home run here, but it’s baseball, and weird things happen (also, Travis Wood has 10 career homers now so it’s not that crazy). And when those weird things happen in the postseason, fans want the full experience of the play. These are moments that are going to be replayed on game broadcasts, MLB.Com, and YouTube for years and years.

The in-game coach interview is not only worthless and pointless, it gets in the way of great moments. Pitcher hits homer and we miss out — Jason Riley (@JasonRileyWDRB) October 9, 2016

Now, this was actually a great story about Beasley returning to the team after battling rectal cancer. But an interview could’ve been shown right before the game resumed, during a visit to the mound, or in the pregame, postgame, etc. Instead, with it being live, the homer was shown on a split-screen, with no play-by-play call. Winer had to cut off Beasley during the interview to tell the audience that Andrus got “a double”, before then realizing it was a home run. When Andrus finally rounded third base, Winer said, “Excuse me, that’s not a double; that’s a home run.”

So, there wasn’t a full screen of the homer. There wasn’t a play-by-play of the homer. Winer had to cut off Beasley’s story. And then Winer got the call of the play incorrect because he was understandably focused on the interview. This is uncomfortable for everyone involved, and many viewers (myself included when it was live) missed the home run because of no play-by-play that it was happening.

While Beasley’s story was certainly interesting and deserved to be shared at some point when game action was not happening, most of these in-game interviews are almost completely pointless, where managers/coaches/players tell us things we already know or give an update on a player’s health status that can just be relayed to a reporter.

So, please, stop these in-game interviews already, and let us watch what we tuned in to see: a postseason baseball game.