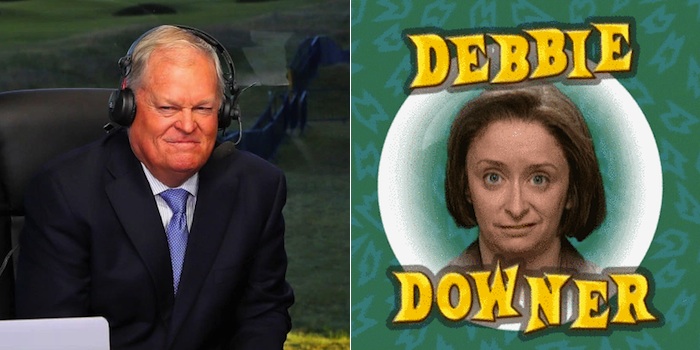 NBC broadcast its first major golf tournament since the 2014 U.S. Open this past weekend, but not everyone was happy to see resident curmudgeon Johnny Miller back in the booth for the British Open.

Miller’s shtick has always been to “call it like it is” and not give a damn if that offends the golfers he covers. The players have openly hated his guts for years but he’s long been a media darling and fan favorite for his keen insight and biting criticism.

Personally, I’ve found him very refreshing in a sport where even the slightest criticism feels off limits because of the cozy relationship between players and analysts.

Some of Miller’s most famous quips include saying of Craig Parry’s swing in 2004, “If Ben Hogan saw that, he’d puke,” and observing during the 2008 U.S. Open that Rocco Mediate “looks more like the guy who cleans Tiger’s swimming pool.”

But as Miller’s negativity seems to grow with his age and players and members of the media have called him out on Twitter for it, he’s now too often left looking like golf’s “Debbie Downer” — the old “Saturday Night Live” killjoy who obnoxiously found the downside to any situation.

Viewers want someone who isn’t afraid to speak the truth, which is why Miller has been a member of NBC’s golf coverage for 26 years. But there’s a difference between critiquing someone’s game to provide insight, and seemingly cheering for the golfers to screw up.

Miller loves setting players up for failure by talking about easy a particular shot or putt is so that in the event of a miss, he can feign surprise about their lack of execution or fortitude. Or critiquing a swing that’s not absolutely perfect. Or how a player botched a club selection. And, of course, saying how he would have done it differently. Oh by the way, did Miller mention he shot a 63 in the final round of the 1973 U.S. Open?

In doing so, Miller sounds like a grumpy old man who’s about to turn 70 and still bitter about a career that could have been so much better if not for the putting “yips.”

And when his complaints expand to everything from the pace of play to the weather, it feels like there’s always a dark cloud over his head.

Miller was at it again this past weekend while making up for lost time.

When Dustin Johnson had a triple bogey on the 11th hole on Saturday, Miller went out of his way to mock Johnson for customarily waving to the gallery as he walked off the green. Would Miller have rather Johnson stormed off the green like a brat?

Most notably, Miller said of Rory McIlroy on Sunday:

“I think he overdid the weight room, personally. I don’t think that helped him at all. I think the same thing with Tiger Woods. You just get carried away with wearing the tight shirts and showings off their sort of muscles.”

There’s no problem with saying McIlroy should lay off the weights if Miller backed it up with facts. But for Miller to say that McIlroy was driven to beef up by his own vanity and throw Tiger Woods under the bus as well felt ridiculously speculative and unnecessarily personal — especially when you consider McIlroy finished the Open tied for fifth.

Even Henrik Stenson wasn’t immune to Miller’s shtick after shooting a final-round 63 to finish a whopping 20-under, as Miller landed a backhanded compliment to the 2016 champ right before NBC’s coverage wrapped up:

“His putter won him the Open,” Miller observed. “You wouldn’t think that from Henrik Stenson. He’s not known as a great putter.”

I half expected him to lean out the tower on the 18th hole before Stenson tied Miller’s record score in the final round of a major to scream, “You will not make this putt — YA JACKASS!!!”

2017 is the last year of Miller’s NBC contract, meaning he might call just one more major — next year’s British Open — before he retires (it’s quite apparent that David Feherty was brought in to be Miller’s successor). But he’ll also be in the booth for the 2016 Olympics in Rio de Janeiro next month and the Ryder Cup in September. It would be a nice change of pace if Miller used those opportunities to scale back the negativity and schadenfreude.

Otherwise, NBC might as well follow the lead of “Debbie Downer” and finish each of his observations with a sad trombone.