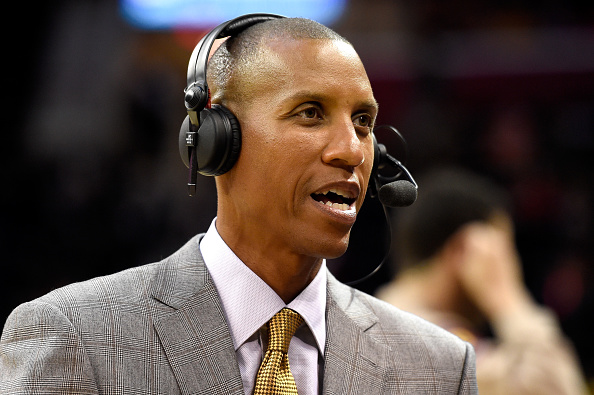 Fans bring up the events of May 7, 1995 to Reggie Miller at least once a day.

After famously scoring eight points in nine seconds to lead his Indiana Pacers past the New York Knicks in Game 1 of the Eastern Conference semifinals, he made this reporter, then seven years old, cry.

“They like to revisit it quite often, especially when I cover Knicks or Nets games,” Miller, the Hall of Fame player and TNT broadcaster told Awful Announcing over the phone from his hometown of Los Angeles.

With four days in between Games 2 and 3 of the Western Conference Finals between the Warriors and Thunder, Miller went back home to rest up and prepare for Sunday night’s crucial contest in Oklahoma City, which he’ll call for TNT alongside Marv Albert and Chris Webber.

“A lot of people say they used to hate me, but now they respect me,” Miller said, adding that a younger generation now knows about Miller’s cold-blooded masterpiece because of ESPN’s 30 for 30 Winning Time, which came out in 2010.

In an extensive interview with Awful Announcing, Miller discussed the conference finals, Stephen Curry and his unique Instagram selfie series.

“When you get to a final four situation and an underdog goes and steals home court,” he said, “now we have a series, obviously.”

Miller noted that over the last 30 games or so, Thunder center Steven Adams has really improved and that the team is doing a much better job of incorporating supporting players like Adams, power forward Serge Ibaka, center Enes Kanter and shooting guard Dion Waiters alongside the superstar tandem of Kevin Durant and Russell Westbrook. And that’s really helping OKC be successful this postseason, coming off their upset of San Antonio in the conference semifinals.

Miller was clearly impressed by Stephen Curry’s 28-point performance in Game 2, but said that he can get so much better in this series.

“In these playoffs, we have yet to see a complete Steph Curry,” he said. “We’ve seen pieces.”

That can be partially attributed, he said, to the knee sprain he suffered in the first round against Houston that kept him out for four games over the course of two weeks. And Miller knows, more than nearly anyone, the kind of preparation it takes to be an all-time great shooter like Curry is.

“I can appreciate all the hard work that goes in to building Steph Curry’s skills,” he said. “I’ve seen that before and I know what it takes.”

Miller said he respects Curry’s work ethic and how he goes about playing the game.

“To hear Reggie himself be mesmerized by what Curry is doing is so fun and pays such great tribute to Steph,” Miller’s longtime broadcast partner Kevin Harlan told Awful Announcing in a January Q&A. “Here’s a Hall of Famer like Reggie Miller who’s in awe as well.”

Miller is also not one of the old-school legends like Oscar Robertson and Isiah Thomas who claim that Curry would not be this good 20, 30, 40 or 50 years ago.

However, Miller defended Robertson, Thomas and others based on how their individual Curry questions were phrased.

“The question they were asked is how they’d do against him,” Miller said. Their egos and confidence in their abilities is what made those players so great, so of course they wouldn’t admit to not stacking up against Curry, according to Miller.

“Once Curry finds his rhythm again, they’ll be hard to beat.”

Miller said that Golden State was unfairly criticized last year for getting a lot of fortunate breaks go their way, from playing Houston in the conference finals to the injuries Cleveland sustained over the course of the postseason, including Kyrie Irving’s fractured kneecap in Game 1 of the Finals.

“People were trying to belittle their run last year,” he said.

This season, the Cavaliers are being similarly criticized for its relatively easy path of Detroit, Atlanta and Toronto.

“It’s not Cleveland’s fault,” Miller maintained. “They’re only playing who’s in front of them.”

Golden State does not have the problem of facing inferior competition this year. Miller and the rest of the TNT talent and crew will head to OKC for Sunday’s hugely important Warriors-Thunder telecast. And along the way, Miller will continue with his travelling social media series called #SeatMateSelfie.

Miller’s job requires a whole lot of air travel, and so he tries to turn the mundane into something special. Getting to know someone is a lost art, he said, so he tries to get to know the person sitting next to him on his flights instead of just mindlessly looking at his phone the entire time.

“In today’s age with social media and everyone having a smartphone, we are so consumed by our devices,” Miller said.

So he strikes up a personal conversation with his seat mate and posts their stories to Instagram. Miller’s series really took off towards the end of last year when Julia Roberts sat next to him on a flight.

“I was lucky,” he said. “Julia is when it really caught on.”

With Game 3 of the Western Conference Finals quickly approaching, the drama and anticipation over the last four days has been building up and will reach a fever pitch come Sunday night at the Chesapeake Energy Arena. And Reggie Miller will be sitting courtside analyzing the action, waiting for the next cold-blooded playoff moment after having authored so many of his own in his storied career.